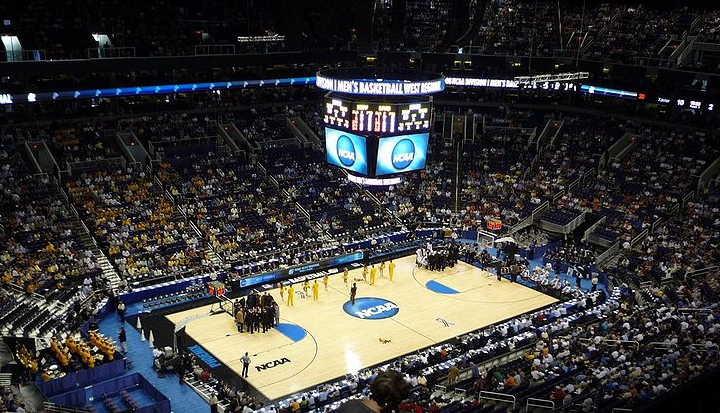 For most Catholics, the month of March signifies the liturgical season of Lent, the 40 days of prayer, fasting, and almsgiving where we take the time to reflect on and renew our relationship with God. While I engage in Lent during the month of March, there’s another ritual that I practice during this same time each year: March Madness (not to be confused with Lent Madness).

I was never a basketball fan until I went to college, where attending basketball games wasn’t just a social outing but a place for the entire college community to rally together in pursuit of a common goal. When the team was doing well, you could feel it across campus. When we weren’t, you didn’t have to talk to someone on the team to know it.

Any good basketball fan knows that the NCAA tournament each March—where 68 college teams from across the country battle for the national championship—is often the most exciting time of the entire basketball season. Likewise, Lent and Easter are incredibly important and, arguably, the most important part of the liturgical calendar as well.

Besides just the overlapping time period, I realized my feelings and actions during March Madness and Lent coincide.

Before Selection Sunday—the day when college teams find out their appointed position in the tournament—I am excited and nervous at the same time. I optimistically anticipate what potential enjoyment or shock the tournament will bring. Will my team get the seed number I think they deserve? What caliber of team will they be matched with in the first round? How far will they make it?

Similarly, in the days leading up to Ash Wednesday, I’m eager but also anxious about the upcoming season of Lent. What should I give up? What intentional practices should I focus on integrating into my life? How will I be able to keep up my Lenten promise for 40 days?

As the NCAA tournament—and likewise Lent—unfolds, my excitement fades. The enthusiasm I had at the beginning is tested when my team loses, or when I forget to do whatever I had promised at the beginning of Lent. I’m disappointed in my team—and in myself—that this year wasn’t any different than the last. My team again didn’t make it to the Final Four, and I didn’t, miraculously, start praying the rosary every week.

By the end of March Madness, and Lent, I find myself feeling much more defeated than optimistic, more upset than renewed.

It’s called March Madness because, quite literally, anything can happen during the tournament. Low ranking teams can beat national favorites and rivals can face off while the entire country watches. But more often than not, the winner is a #1 ranked team, finishing off an already impeccable season. The underdog teams enter the tournament but, sadly, are usually defeated.

Lent also carries that feeling of excited unpredictability, the prospect of personal and spiritual renewal on the horizon. However, for many of us, we feel the same on Holy Thursday as we did on Ash Wednesday, unable to implement any significant changes into our daily life.

We set certain expectations for our teams, and ourselves, and when we fail, it’s upsetting.

But for some reason, year after year, when March rolls around, we forget about the previous year’s failures. We fill out a NCAA bracket and choose what to give up for Lent. Maybe our team loses, or we don’t fulfill our Lenten promise. But the next year, we try again.

It’s that spark of possibility that keeps us excited each March. Lent provides us the opportunity to keep trying until maybe, one day, we do change.