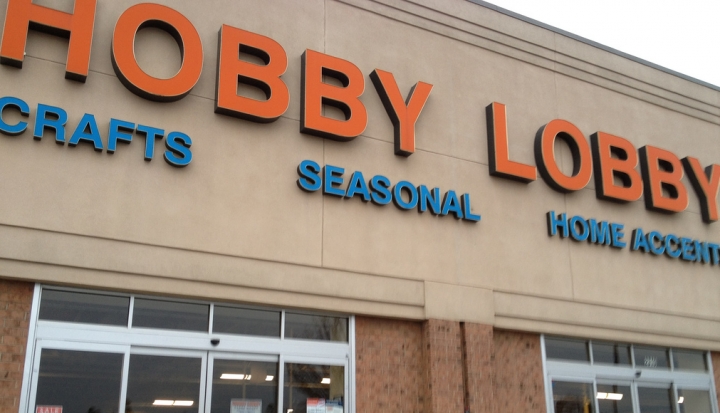 As we have all heard by now, corporations are (legally speaking) people, so it stands to reason that businesses would expect the same level of rights guaranteed to individuals. But two stories making the rounds in the news illustrate just how easily fighting for a company's "religious freedom" can cross the line.

First we have the ongoing case of Hobby Lobby, a national chain of arts and crafts stores that is fighting for its right to be exempt from the Department of Health and Human Services' health care coverage regulations because it objects to providing certain contraception coverage to employees. Founder and CEO David Green has used his personal finances–estimated by Forbes to be $4.5 billion, making him one of the richest men in America–to wage a lengthy court battle against the government. So far, it isn't going so well: A federal appeals court last week denied Hobby Lobby and Green's other business, the small Christian bookstore chain Mardel, an exemption from the law. They of course appealed the ruling, but today Supreme Court Justice Sonia Sotomayor again turned down their emergency appeal, though she did leave the door open for Green to bring the case back to the Supreme Court after exhausting all possible options in the lower courts.

The question of whether secular, for-profit businesses can be exempt from a federal law because their owners object to the law on moral grounds is a tricky one. The law would require the Green family to provide coverage of a product–namely the "morning after" pill–which goes against their personal beliefs. But then there are businesses like the Maryland-based Discover Annapolis Tours, which has taken "religious liberty" a step further.

Since Maryland will recognize same-sex marriages beginning January 1, Discover Annapolis owner Matt Grubbs is suspending his company's offering of trolly services for weddings rather than making these services available for same-sex weddings. Grubbs cites his Christian beliefs and claims he'd rather lose $50,000 a year in business than serve same-sex couples (or face a clear discrimination lawsuit if he should continue to provide the services only for heterosexual couples).

Whether or not you agree with David Green's legal argument, his situation is much different than that of Grubbs. Green, and others who oppose the contraception regulations, argue that they will have to pay for a product that is a direct violation of their religious beliefs. Grubbs, on the other hand, would not be supporting or condoning same-sex marriage by extending the same service he already provides to same-sex couples. Of course, Grubbs is not the first business owner to refuse services to same-sex couples–a Vermont inn last year declined to host a same-sex wedding reception and a legal case is still pending against a New Mexico wedding photographer who turned down a gay client–but Grubbs is trying to make an example of himself by citing the lost revenue the decision has caused him. That's like a restaurant closing its kitchen to avoid serving a certain group of customers and then crying about their drop off in business.

Religious liberty is undoubtedly a valued freedom that should be protected. Just how far it extends into the business world is an issue best left for the courts to determine. But when it comes to denying rights to employees or customers, lets drop the "religious liberty" argument and call it what it really is: discrimination.