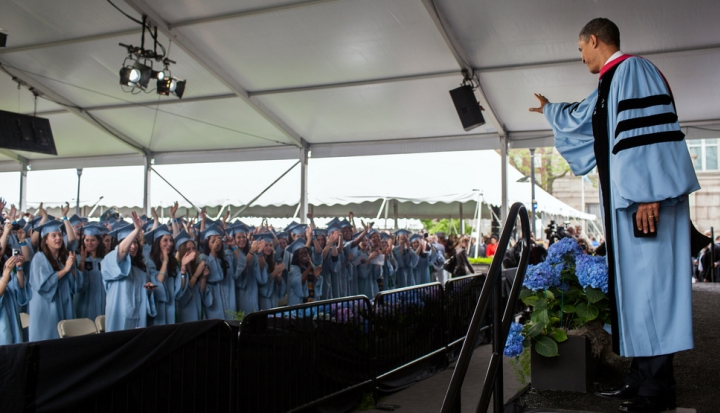 Citing the incredible burden that student loans have put on young people in recent years, President Barack Obama has pledged to help those who have emerged from a college education buried under a mountain of debt. Obama today issued an executive order to cap federal student loan payments at 10 percent of the borrower’s income, an initiative that could help up to 5 million people, while also calling on Congress to pass legislation that would allow borrowers to refinance their loans at lower interest rates.

As the president noted during his weekly address on Saturday, a college education has become both increasingly necessary in landing a job that pays a living wage, and at the same time, increasingly costly. Federal student loan debt now tops $1 trillion. And according to the Project on Student Debt, based on 2012 data, 71 percent of all graduates now emerge from college with debt at an average of just under $30,000 per student. That number marks a 25 percent increase in the average debt per student from 2008 to 2012.

Critics of the president’s latest efforts to address the affordability of higher education were quick to note that many of the problems that cause student debt remain unchanged. House Speaker John Boehner released a statement saying, “Today’s announcement does nothing to reduce the cost of pursuing a higher education, or improve access to federal student loans,” which is true (though the Obama administration has worked to increase availability of federal Pell Grants and other financial aid programs). It also does nothing to help those who are struggling to pay off high-interest private loans, which account for roughly one fifth of student debt.

But hopefully it can help those graduates who are honestly trying–and struggling–to make their loan payments on the salary of their first post-college job. Making loan payments more manageable could also remove obstacles that keep young people from getting married (which often means taking on another person’s debt), buying a house, and saving for retirement.

This may also send a message to young people who are considering college but are somewhat hesitant because of the horror stories they’ve heard about student loan debt. If prospective college students know they might have to take out large loans to pay for school but can be guaranteed that no more than 10 percent of their post-college earnings will go to pay back their debt, it might make them more likely to take the chance on attending college. Even if their degree doesn’t earn them a high salary right away, at least they will know that they aren’t going to be burdened by unmanageable loan payments.

As we reported in our February issue, Catholic colleges and universities are already working with students to make a higher education accessible without plunging deep into debt. While the government has long played a key role in helping young Americans pay for college through student loans, it is important that they make the process as painless as possible so that graduates can repay those loans while still living productive, successful lives.

As the president stated today, “a higher education is the single best investment you can make in yourself and in your future.” We need to make it clear to young people that it is an investment worth making, and not one that they will regret for years to come.