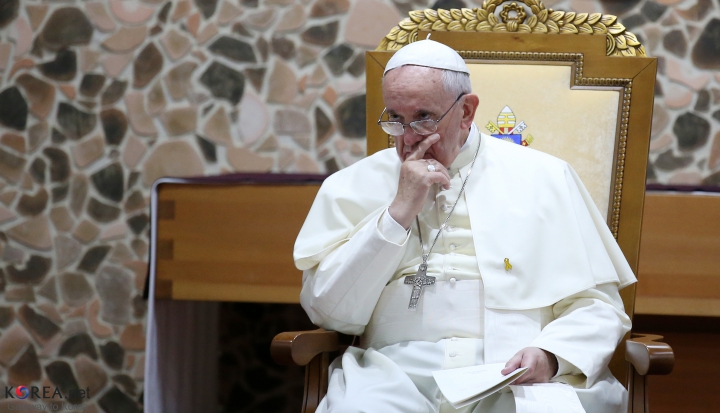 The Bible talks about feeding people a lot. Jesus’ first miracle is turning water into wine at a wedding feast. He turns five loaves of bread and two fish into a meal for 5,000 people. He repeatedly shares meals with “tax collectors and sinners”—the people that the rest of society ignores or despises.

So with all this focus on food in the Bible, it’s no surprise that Pope Francis came down hard on those who are not working toward feeding the hungry around the world. "The planet has enough food for all, but it seems that there is a lack of willingness to share it with everyone," he said during a homily for the general assembly of Caritas Internationalis. He continued on to say that the powerful will face God’s judgment; they will have to answer for their care of the poor and the environment (or lack thereof).

There’s not much that’s ambiguous in the Pope’s words. Feed the hungry. Care for those who have nothing. Do not forget those around the world who are suffering from lack of food and drinking water. They might live in your own city or a continent away, but you are responsible for helping them.

Jesus is also pretty direct when it comes to caring for others. Feed the hungry, he explicitly tells the disciples, for “just as you did not do it to one of the least of these, you did not do it to me.” (Matthew 25:45). Over and over again, Jesus tells us through his words and actions to care about people’s physical needs.

Pope Francis’ exhortation couldn’t come at a more crucial time. A recent Oxford University Press blog suggests that the way we produce food is harming the environment, leading to problems in water supply, soil degradation, and climate change. At the same time, the price of food is rising beyond what many people can afford to pay. After years of considering hunger a declining and solvable problem, the world is realizing that it’s still a serious issue.

Both the Gospels and the Pope’s sermon say that helping the hungry should be done out of love: both the love of God and love for one another. Only love is a strong enough force to overcome our self-interest and help us make the sacrifices that are necessary to stabilize the problem of hunger and make sure everyone has enough food to eat.

I keep coming back to the idea of liberation theology, which, as you might have seen on the U.S. Catholic website, has been in the news lately. Liberation theology has become a heretical word for many Catholics.  But at its core, underneath all the history and politics and terminology, liberation theology is also about love. It’s about being willing to work so that “the poor” (defined broadly) have the same opportunities and right to life that everyone else does. Like Pope Francis’ command to feed the hungry, working to make this happen takes love and self-sacrifice.

Maybe, like Jesus, we need to be willing to look beyond the labels. “Liberation theology,” “tax collector,” “sinner”—underneath these words is a very simple idea. Be involved. Care for those who have nothing. Feed the poor. Not very ambiguous at all.