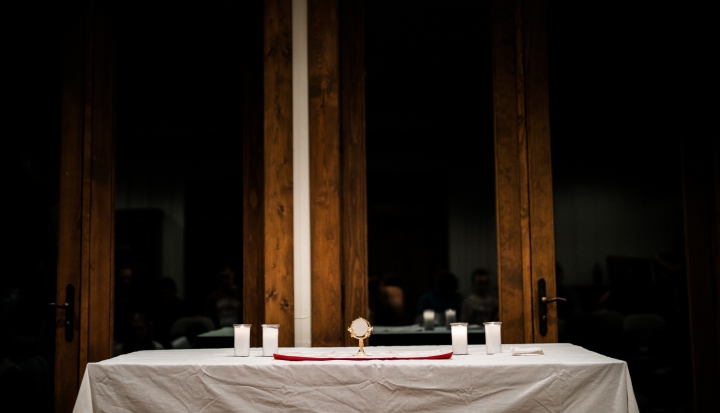 I felt welcome at Michigan State University right away. My journalism professors gave me the tools I needed to succeed in my profession, and I made some great friends. I even found a nice Catholic church within walking distance from campus—St. John Church and Student Center, part of St. Thomas Aquinas Parish in the Lansing diocese. I loved going to Mass every weekend to mentally unwind from my hectic graduate school schedule.

But my Spartan pride dwindled upon learning about the terrible sins committed by Larry Nassar, a former osteopathic physician at MSU and former USA Gymnastics national team doctor. Nassar is currently serving a 60-year federal prison sentence for child pornography. He has also been sentenced for up to 175 years in state prison for molesting close to 300 young girls, including high-profile Olympics gymnasts, under the guise of his medical practice as far back as 1992. Despite years of accusations, administrators of my alma mater were complicit in Nassar’s actions and contributed to the hurt of hundreds of people.

And I was even more upset when I learned that Nassar also served as a Eucharistic minister at St. John Church, the place where I and other Catholic Spartans go to feel safe and spiritually nourished in East Lansing.

Larry Nassar knowingly served parishioners the precious body and blood of Christ. Not only that, he also served as a middle school catechist at nearby St. Thomas Aquinas Parish.

I can’t say for certain whether or not Nassar and I crossed paths at St. John, but there’s a good possibility that we did.

Sadly, this isn’t the first time I’ve encountered abuse in the church. I befriended someone at the parish I attended as a student at Valparaiso University after getting to know each other at a church retreat and taking a couple of classes together. That is, until I found out he had been arrested for sexually molesting his cousin. I felt the same anger and disgust then. And of course I know about the priest sex abuse scandals that have plagued the Catholic Church. Yet I continue to go to Mass and form relationships with fellow parishioners.

Why do Catholics continue to follow the faith with each report of heinous sins committed by some priests and parishioners?

We go to Mass to celebrate the Eucharist and the forgiveness of sins, the heart of our faith. The celebration is not a private devotion, but something shared with our Catholic community. Jesus is not only present in his body and blood that we consume during the Eucharist, but in the word of God that transcends all of us. This is why we become devastated when we learn that someone in our community has been deliberately disregarding its meaning and sinning without repentance.

I admit that my faith sometimes weakens and I become overwhelmed when reading of new cases of church-related sex abuse. But I am also heartened by the people and organizations taking action to support survivors and prevent future occurrences of abuse. For example, the diocese of Brooklyn founded the Office of Victim Assistance, which provides support groups, counseling, and therapy referrals for sexual-abuse victims. Nicholas DiMarzio, bishop of the Brooklyn diocese, celebrates a Mass of Hope and Healing for anyone affected by sexual abuse every year in April, National Child Abuse Prevention Month.

The United States Conference of Catholic Bishops has a list of victim assistance coordinators, their contact information, and the diocese they represent online. U.S. bishops advise parents of victims to call their local police or services department. “Reassure your child that he/she did nothing wrong and that he/she did the right thing by telling you,” they emphasize.

Instead of becoming mired in our grief over issues of abuse, parishes must come together to support people who have been impacted by sexual abuse. Start a weekly support group for victims; implement child protection policies and safety awareness training for schools and parish programs that go above and beyond the guidelines set by the USCCB’s Charter for the Protection of Children and Young People; create a fundraiser for security cameras to install around your church; hand out information pamphlets of available resources or include them in your weekly church bulletin; start a dialogue among parishioners that addresses questions and concerns; donate money to organizations that support sexual assault victims in your local community; reassure victims that they have done nothing wrong and that you wholeheartedly support them through their healing process. The list of possibilities goes on.

I love MSU, but at the end of the day, I am loyal to Christ before Spartan Nation. I still look at my master’s diploma with a sense of accomplishment, despite the negative press MSU has earned over the past 18 months. And yet, I know that Christ wants me to shift my energy towards more important issues, like what I can personally do to help make the world a better place and build a stronger connection with God. Lent has come at the perfect time for such self-reflection and discernment.