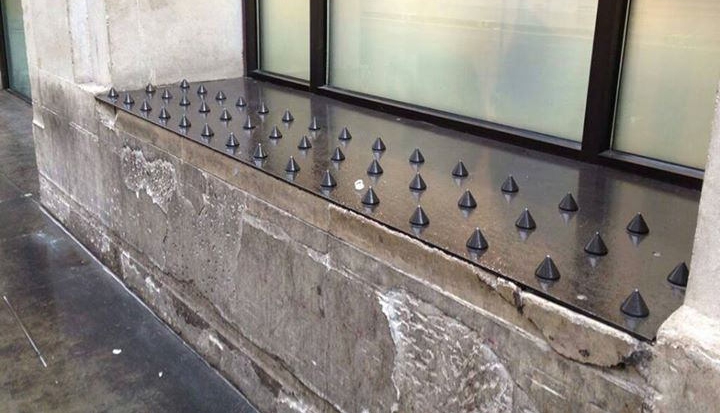 In my daily commute to Chicago’s Loop, the sights and sounds become routine. Leaving my apartment at nearly the same time every day, I see the same people on the train platform with me to catch the same train. Another aspect of city life that has become routine is the number of people experiencing homelessness that I pass by. They are the same faces standing in the same places.

The photos on Twitter that have gone viral of a luxurious apartment building in London have caused quite the uproar. In the entrance way of the building in which apartments go for $920,000 and up, metal spikes had been added in the nooks to deter people from sleeping on the ground outside the door.

Although these spikes have been since removed—after protests and a petition containing 132,560 signatures was created—nothing says “You’re not welcome here” quite like spikes. Many are arguing that these human beings are being treated like pigeons as spikes are used to stop the birds from landing on roofs and other places.

After reading about this, another thing I have added into my daily routine is noticing the other ways we deter the homeless from hanging around. Signs on the Chicago Transit Authority platforms that prohibit continuous riding on the trains have an undertone of stopping those experiencing homelessness from sleeping on the train. The armrests in the middle of benches to stop someone from sleeping in a park or at a bus stop. There are anti-loitering signs everywhere. We definitely don’t make it easy for someone to rest.

Chicago is not the only city to make it tough for the homeless. In a Sounding Board we at U.S. Catholic conducted last August, Paula Lomazzi—who spent seven years on the street—addressed the issue of criminalizing the homeless all around the country:

“It is only understandable,” Lomazzi said, “that the average resident or civic leader would desire that homeless people were not visible in their communities. But this very visibility is evidence that criminalizing homeless people does nothing toward a solution. In fact, the opposite is true. A person who gets cited for what I like to call ‘an act of living crime’ ends up with a criminal record from the citation and possibly an arrest record resulting from failure to pay the fine, thereby lessening their chances to qualify for housing or employment. Homeless people are forced to move from one place only to reappear in an equally illegal and unwelcoming location.”

The cycle of homelessness is vicious and we need to take care of these people by making their hard situation easier. We need to treat them as human beings and not as something “unsightly.”  We need dialogue. Not spikes and signs.