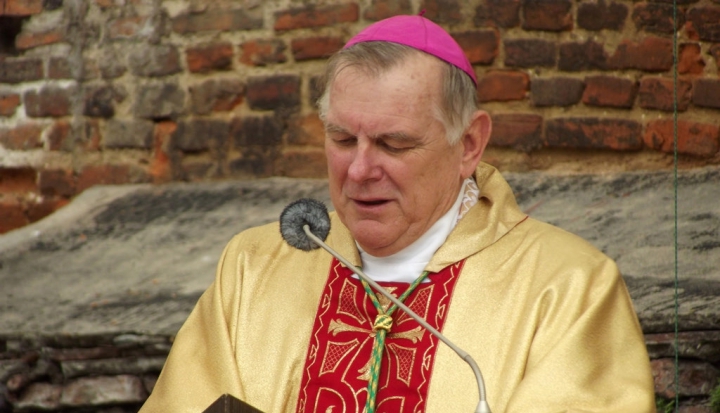 After Florida became the 36th state in the nation to legally recognize same-sex marriage, Miami Archbishop Thomas Wenski has put out a warning to employees of his archdiocese: Supporting the new law could cost you your job.

In a letter sent to all archdiocesan employees, Wenski reminds them of the church's teaching on marriage and notes that no matter what role they serve in the archdiocese, they "represent the Catholic Church and the Archdiocese in everything you do and say." He then adds a passage from the archdiocese's employee handbook that states "certain conduct, inconsistent with the teachings of the Catholic Church, could lead to disciplinary action, including termination, even if it occurs outside the normal working day and outside the strict confines of work performed by the employee for the Archdiocese." Employees should also "exercise discretion when posting on social media sites" and the policy notes that online activity outside of work can be grounds for termination. (h/t to Kathy Schiffer's blog Seasons of Grace for posting the story and letter)

It isn't hard to find flaws with this policy. I've been suspect of church organizations requiring all employees to follow church teachings in their personal lives, regardless of their job function. I've met many people who work for the church but aren't Catholic, and there are plenty of jobs within an archdiocese that have nothing to do with the Catholic faith (building maintenance, IT department, etc.). Granted, it would be a problem if these people were championing same-sex marriage while also identifying themselves as representatives of the church, but this policy goes far beyond such extreme examples.

Should an employee of the Catholic Church, regardless of their own beliefs, not be allowed to attend the wedding of a same-sex couple? What if the employee is the parent or sibling of someone in a same-sex relationship? Can they attend the wedding, but not mention it on social media? Would they be allowed to post family photos on Facebook, or would showing themselves with a family member married to someone of the same sex be considered "conduct inconsistent with church teaching"?

These are the kinds of questions employees may be asking themselves after reading Wenski's letter. I understand why the Miami policy is broadly written, and I assume that some of these personal situations that don't cause public scandal would be overlooked. But what is also overlooked is the more pastoral approach that Pope Francis and others in the church have called for–that limiting statements on church teaching about marriage to warnings and legalistic language without any discussion of showing compassion and mercy to others fails to carry out the full mission of the church.

Yes, a church employee posting on Twitter about their enthusiastic support of the new Florida law would be problematic. But posting comments that could be hurtful in the name of the church could cause just as much scandal. Only focusing on condemnation without mention of compassion misses the big picture.