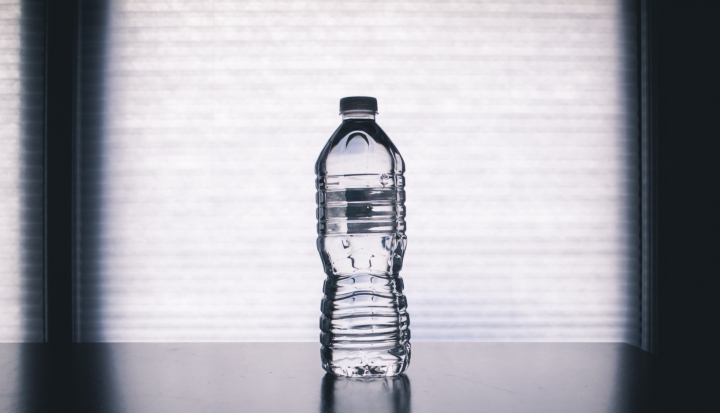 In the spring of 2016, as a graduate student at Michigan State University, I spent some time in Flint interviewing residents and business owners on how they were dealing with the lead crisis. I attended Ash Wednesday Mass at St. Michael Catholic Church  in Flint and was heartbroken to see the drinking fountains and faucets covered with signs saying not to use them. No one living in the church’s rectory could use tap water, either. The holy water bowls were empty, but the hallway was full of donated bottled water for parishioners to take home.

Since 2014, more than 100,000 residents of Flint, Michigan have suffered from an ongoing water crisis that has resulted in at least a dozen deaths and which stands in harsh contrast to the tenants of our faith. Michigan has the second largest water area of any state in the country and yet, despite living in a state that is 41.5 percent freshwater, not all Michiganders have access to safe drinking water.

Water is an important symbol in Catholicism. We use water to wash away original sin and welcome new church members through baptism. We remind ourselves of our baptism when we enter church by dipping our fingers in holy water and making the sign of the cross. The priest washes his hands with water before holding the Eucharist as means of purification. He also adds some water to the Communion wine to symbolize Christ’s humanity and divinity.

But water is not just symbolic; the Compendium of the Social Doctrine of the Church says that access to clean water is a fundamental human right: “Inadequate access to safe drinking water affects the well-being of a huge number of people and is often the cause of disease, suffering, conflicts, poverty and even death.”

Flint’s water problems began when the city switched its water source from the treated Detroit River and Lake Huron to the untreated Flint River. The result was increased lead in the drinking water, which caused an outbreak of Legionnaires’ disease, a very rare, severe form of pneumonia that can lead to acute kidney failure, respiratory failure, septic shock, and sometimes death.

A couple of years ago, Michigan started using part of a $450 million state and federal budget to distribute free bottled water to Flint residents in order to reduce their lead exposure. Up until a couple of weeks ago, they have been using that free bottled water for drinking, cooking, bathing, and cleaning.

However, on April 6, 2018 Michigan announced that it would discontinue its free bottled water program because Flint’s lead levels are now below the levels deemed actionable by the U.S. Environmental Protection Agency. And yet, despite the significant progress made, Flint Mayor Karen Weaver and Dr. Mona Hanna-Attisha, the pediatrician whose research exposed the city’s water crisis, both argue that the bottled water program should continue until all of Flint’s corroded pipes are replaced. Not surprisingly, many residents still don’t trust the tap water, either.

In 2003, the Holy See Delegation to the World Water Forum published a document titled “Water, an Essential Element for Life,” which explains the church’s stance on the ethics of water: “Whether it relates to quantity, quality or disease, the trend away from centralized government agencies and towards empowering local governments and local communities to manage water supplies must be emphasized. This necessitates building community capacities, especially in the area of personnel, and the allocation of resources to the local level.”

But here, too, Michigan is acting in a way that goes against the priorities of the church. Just four days before Flint announced it would discontinue providing bottled water to residents, the Michigan Department of Environmental Quality approved a permit to allow Switzerland-based company Nestlé to pump up to 400 gallons of water per minute from the White Pines Springs well in the Great Lakes Basin. The decision was made despite heavy public opposition—80,945 comments against vs. 75 in favor of the request.

Previously Nestlé, the world’s largest food and beverage company, could only pump up to 250 gallons of water per minute, 60 percent less than the new permit allows. Nestlé, the largest owner of private water sources in the state, bottles and sells Michigan-extracted water under the company’s Ice Mountain label. According to Lindsey Smith, investigative reporter for Michigan Radio, the public’s three biggest concerns were the privatization of water, the fact that water is not for profit, and corporate greed vs. the needs of people and the environment. Currently, Nestlé only pays $200 a year for more than 200 million gallons of water.

Nestlé has faced water-related controversy before. In a 2005 documentary titled We Feed the World, Nestlé’s then-CEO Peter Brabeck-Letmathe said, “The one opinion, which I think is extreme, is represented by the NGOs, who bang on about declaring water a public right. That means that as a human being you should have a right to water. That’s an extreme solution. The other view says that water is a foodstuff like any other, and like any other foodstuff it should have a market value.”

Catholic social teaching disagrees with Brabeck-Letmathe. The Compendium of the Social Doctrine of the Church says:

“By its very nature water cannot be treated as just another commodity among many, and it must be used rationally and in solidarity with others. The distribution of water is traditionally among the responsibilities that fall to public agencies, since water is considered a public good. If water distribution is entrusted to the private sector it should still be considered a public good. The right to water, as all human rights, finds its basis in human dignity and not in any kind of merely quantitative assessment that considers water as a merely economic good. Without water, life is threatened. Therefore, the right to safe drinking water is a universal and inalienable right.”

Interestingly, Nestlé applied for the new water extraction permit in July 2016, six months after Michigan Governor Rick Snyder and then-President Barack Obama declared separate states of emergency in Flint. While the state government had no legal ground to reject Nestlé’s permit request, the spirit of the law is in question.

For most Flint residents, leaving their hometown is much easier said than done. According to the latest census data, Flint is the poorest city in the country with at least 45 percent of the city’s residents living below the poverty line; 58 percent of these residents are minors, compared to the national average of 18 percent. Most of these people can’t leave.

“Water, an Essential Element for Life” states, “All depend upon the fate of water. Access to safe water and sanitation is indispensable for the life and full development of all human beings and communities in the world.”

Water, in both a spiritual and literal sense, is life.

Looking to help Flint? The City of Flint’s website provides a list of resources and information on how to help its residents during the water crisis. Catholic Charities of Shiawassee and Genesee Counties is one of the water distribution sites listed. In addition, don’t give up on expressing opposition of Nestlé’s new permit to Michigan public officials. Stop buying Nestlé products. Every little effort can potentially pressure the food and beverage giant to back off on its water extraction plans.