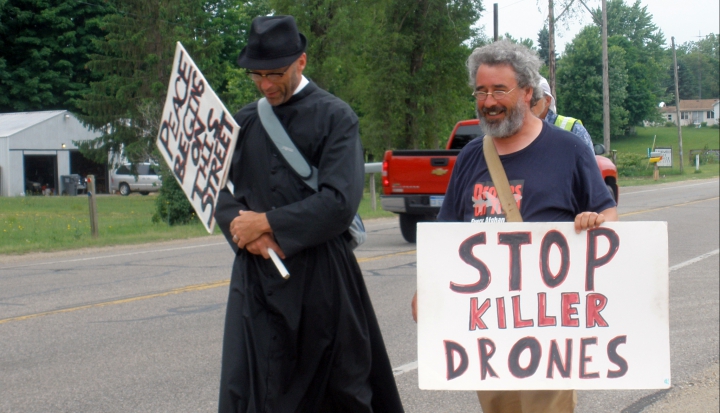 At first, I was puzzled by them, even repulsed. I thought them wacky as they shared their stories of arrests and prison time for performing nonviolent acts of protest. Some looked like hippies from the 60s. However, as over a two-week period I got to know them, ate with them, walked with them, and talked with them, I changed my mind about them and discovered that they were sincere, committed people trying to change the world by promoting hope and peace rather than war and domination.

These are the peace activists I met during their 165-mile walk from Chicago to Battle Creek, Michigan. They were protesting the plan to make the Michigan Air National Guard base in Battle Creek the latest U.S. command center to operate the MQ9 Predator drones that strike targets in Pakistan, Afghanistan, Yemen, and other places where terrorists roam. Their walk across the Chicago lakeshore and the country roads of Indiana and southwestern Michigan was a tool to communicate the message that drone warfare is a bad idea. Drones kills innocents. Drones give their pilots post-traumatic stress disorder. Drones endanger Americans at home, as these weapons will eventually be used by our enemies on us.

The walk enabled the activists to talk to people one on one as well as to create a spectacle for the news media. It provided a means toward raising consciousness among grassroots citizens. Even though the United States has committed billions and billions of dollars toward their research, production, and use, the most common question from people on the street was still, “What are drones?”

The activists walked about 15 miles a day. They walked to the beat of a simple Buddhist drum and later to a stick being struck on a plastic bucket lid found on the side of the road. They carried signs protesting the fact that too many innocent people have been killed in an attempt to get the terrorists who threaten us. Each day the activists were greeted by supporters who also wanted to see an end to drone warfare; they were fed through people's donations; they were given a thumbs up along the rural highways; and they were shunned by a few, a very few, with a rude yell or a gunned car engine.

People joined and quit the march at various places along the way, but the 16 walkers who made up the core group were there every day, walking on the hard or gravelly shoulder of the road one foot in front of the other. During the walk they talked, meditated, and chugged water. They told stories about their lives, discussing their triumphs and frustrations with peace activism and our government's continuous urgency for war. Deciding to wage war and following through on it is really the same process as deciding on peaceful solutions and following through on them.

These peace activists too are just as committed to their cause as any soldier, sailor, airman, or Marine. They believe in honor, in being true to their mission, and in the discipline of peaceful interaction with others. The only difference between the peace activists and the military is that they never—and I mean never—resort to violence, even as a last resort. Activists act, they don't pontificate. Activists put themselves on the line; they don't worry about protecting their jobs, their 401k, their status in a community. Activists take a stand and risk hoses, plastic handcuffs, tear gas, even prison for the cause of peace.

Peace activists don't come close to resembling the wise old men who readily send our troops to war for the “cause of freedom.” More and more these men have no experience of war, in fact, they have cleverly avoided it. These wise old men find many justifications for going to war, and they have been proven wrong over and over again. Even today, the American people largely believe the wars in Afghanistan and Iraq were a mistake, even though 43 percent of Americans and millions of peace activists throughout the world warned against the Iraq war.

I don't defend the terrorists, but it doesn't take much to understand that America’s bullying of others with military might frequently ends up with some form of retaliation. That is what 9/11 was about. That is why terrorists hate America. Somehow, this dynamic evades the foreign policy experts who continue to take us to war in the name of national security. Their latest fiasco is two failed wars and a huge recession since 2001. Yet, they continue to advance their hawkish positions, and the media continue to give them a voice. Their latest lie is that drones are good because they keep us from having to send our military into direct combat on the ground.

The country would do well to listen to peace activists for a change rather than rely on the foreign policy experts. These activists look for peaceful solutions to conflict that put all people and their welfare first and last, rather than bomb our enemies into submission. They give people hope for a better world. They advocate using funds for health, education, housing, the environment, and sustainable development. In attempting to protect us, the war mongers have drained this country financially, emotionally, and spiritually. We have also reached a point where we rely on technology to fight our battles. Drones are not the answer, peace is. Why not give it a try?

Olga Bonfiglio is a freelance writer, organic gardener, and lamancha goat handler at a small dairy farm in southwestern Michigan. She blogs at olgabonfiglio.blogspot.com.