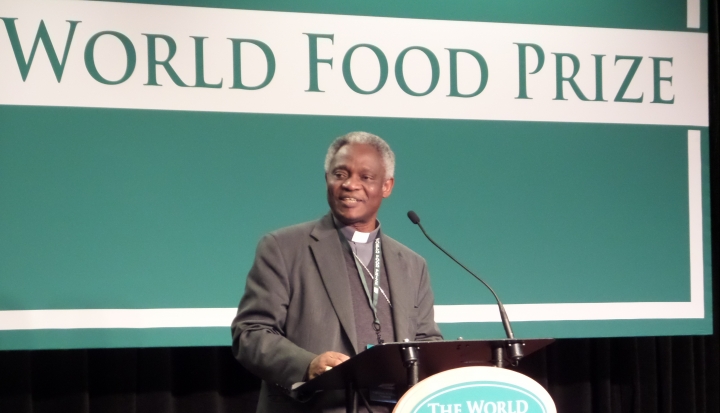 As the weeklong activities concluded in Des Moines, Iowa for the World Food Prize, the hoped for guidance to light a way forward through the minefield of genetically modified crops was provided by Cardinal Peter Turkson. It just might not have been the kind of light people were ready for.

When the cardinal arrived on Wednesday, he first met with business students at Drake University where he addressed a standing-room-only audience. Speaking for more than an hour, Turkson placed before the students the idea of thinking of business in a more moral way, infusing it with ethical behavior. Presenting a 30-page booklet prepared by the Pontifical Council for Justice and Peace entitled “The Vocation of the Business Leader,” Turkson stressed the need for business leaders to consider what the reflection had to say–whether they are a believer or not. This means striving toward the common good, uplifting human dignity, and not focusing only on profit which, he warned, turns human beings into commodities.

The cardinal took the rest of his time in Iowa to hammer that message home, and he did it everywhere he went.

After leaving Drake he walked into the First United Methodist Church of Des Moines, where the pews were packed with those vehemently against corporate agriculture on several levels. Seated in the audience were the Occupy the World Food Prize protestors who had invited the cardinal to hear their complaints against big agriculture, as well as small farmers kicked off their land and those surrounded by foul smelling hog lots where housing values have been gutted. The cardinal listened to six separate stories of how bigger and bigger companies have turned Iowa into a 60 percent land of renting farmers, forced into using pesticides and chemicals on their plants in larger quantities than ever before.

Each protestor asked Turkson to stand up to the World Food Prize committee and Monsanto, and to help them fight back against predatory practices. It was clear Turkson was visibly moved by the plight of these farmers. He listened intently to how agriculture in Iowa and surrounding states has changed over the last 20 years, stating he was learning more about farming than he had expected and that he was not an expert in agriculture. He also told protestors, “It does no good to burn the bridge behind you because you may need it to walk back over.”

Referencing statements by Pope Benedict XVI and John Paul II, he told the crowd that they deserved to be heard and listened to and that he would take their concerns directly to the Vatican for the pope to read.

“I am here to listen,” said Turkson, “Pope Francis tells us to listen, listen all the time. At the same time, there are three interdependent activities which businesses should take up: to address genuine human needs through the creation, development, and production of goods and services. They should organize good and productive work and they should use resources to create and to share wealth and prosperity in sustainable ways.” After he finished speaking the cardinal was given a standing ovation, his second.

When the time arrived for Turkson to address the WFP luncheon–where the laureates and leaders from Monsanto, Pioneer, Du Pont, and many more businesses throughout the area gathered the next day–he was hitting his stride.

Standing before another packed house, he said, “The church encourages discussion and debate. Let me begin the conversation where it is possible. All people, believers and unbelievers alike, should cultivate the posture of dialogue. World Food Prize (and) Occupy World Food Prize are divergent views but they both seek the elimination of world hunger and food security. I call for conversation and dialogue and where there is a difference of opinions, we need to go deep into dialogue. Let us start conversing. Let us begin this way. The earth is the home of the human family, but as St. Paul says, the earth languishes and suffers from the sin of its inhabitants.”