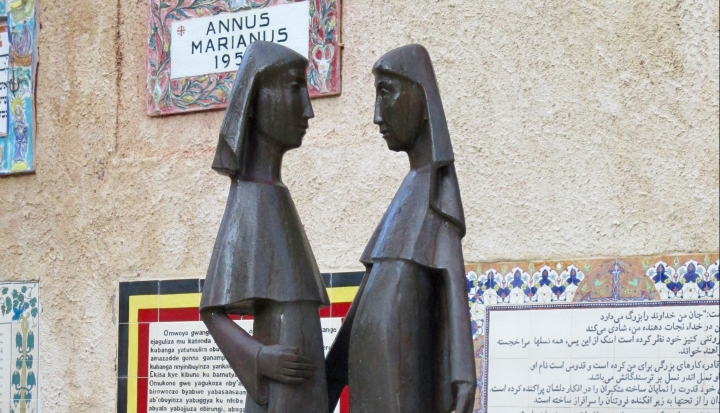 From January 17 until January 27, U.S. Catholic and Catholic Theological Union are cosponsoring a Holy Land pilgrimage that is led by CTU’s eminent scripture scholar and Jerusalem expert, Franciscan Father Leslie Hoppe. U.S. Catholic’s popular scripture columnist Alice Camille is also accompanying the group and leading prayers, reflections, and discussions. She is filing blog posts from the trip. Here is her second day of the group’s trip:

How else to begin the journey to Jesus but with Mary? We visited her, visiting her kinswoman, in this delightfully simple sculpture outside the Church of the Visitation. It’s flanked by tiled Magnificats translated into dozens of languages. A long day of international travel had preceded this one, and most of us were not prepared for a visit, not quite so early anyway. But you don’t have the luxury of sleeping in when celebrating Mass at a popular shrine.

At the church, we encountered several other groups of pilgrims roused for the occasion, including 20 sisters from India in bright colored saris. They inquired if they might join us for “an English Mass.” The more the merrier, especially in a chilly morning chapel. Halfway through the liturgy, these women burst into what can only be described as spontaneous angelsong that ascended and took all of our hearts with it. We had been entertaining angels unawares.

This meant more as the day wore on. We went to Yad Vashem next, to contemplate with cruel exactness the meaning of the Jewish Holocaust. From a joyful mystery to a sorrowful one before we could catch our breath. We spent the balance of the day at the Shrine of the Book, a monument to the Dead Sea scrolls. Of course it’s an archeological miracle that these manuscripts still exist. But it seemed perilous to ponder that human beings could both sacrifice a community with such monstrous efficiency and then rescue paper with such tender hands.

The past is a fragile bridge to cross. Three shrines to commemorate three events. If only history were nothing but joyful mysteries and angelsong.