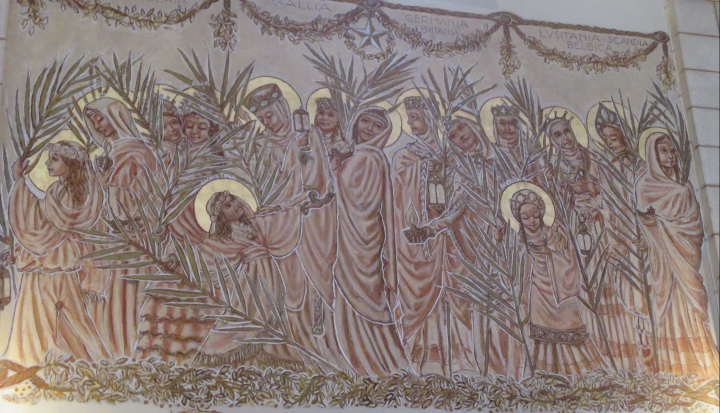 From January 17 until January 27, U.S. Catholic and Catholic Theological Union are cosponsoring a Holy Land Pilgrimage that is led by CTU’s eminent scripture scholar and Jerusalem expert, Franciscan Father Leslie Hoppe. U.S. Catholic’s popular scripture columnist Alice Camille is also accompanying the group and leading prayers, reflections, and discussions. She is filing blog posts from the trip. Here is her recap of her day in Bethlehem:

One advantage of having an intimate-sized group like the 13 of us is that we learn each other’s names and basic stories pretty quickly. We were strangers in the airport in Philadelphia on Saturday night. By Tuesday in Bethlehem we were a vitally functioning faith community gathered around the altar in the small grotto at Shepherd’s Field. In Bethlehem, I repeat. Like falling off a Christmas card and into the New Testament.

Not long after Mass, we were strolling through the backstreets off Manger Square listening to the muezzin give the Muslim call to worship from a nearby minaret. The chant got me thinking: Unlike nearly every other place we normally find ourselves, there is no sacred and profane split in the consciousness here. It seems every street reminds you that you’re walking through the land of the Bible. Everything is holy. Every hour is sacred.

Is there some way to import this state of mind and bring it home? Every pilgrim’s challenge.

After viewing the traditional holy sites—the incomparable Church of the Nativity, the charming Milk Grotto—and buying enough rosaries to arm the entire Blue Army, we made our way to a less typical stop: Bethlehem University. There we encountered some Palestinian students and professors who took us on a short tour of their divided consciousness as citizens of a place that is not quite a nation in the eyes of many, as marginal residents in a land that only two generations ago was their home. There, we had another wave of sadness pass over us different yet as full of pathos as what we encountered at Yad Vashem yesterday. Displacement of a community is not a holocaust. But it is a tragedy that continues to impoverish one particular people literally and the world community morally.

This photo from Bethlehem University’s Chapel of the Divine Child depicts a wall of girl children who were martyrs. The opposite wall is covered with boys. It’s such a tender place to stand, in a room surrounded by children sacrificed to conflicts none of them invented.