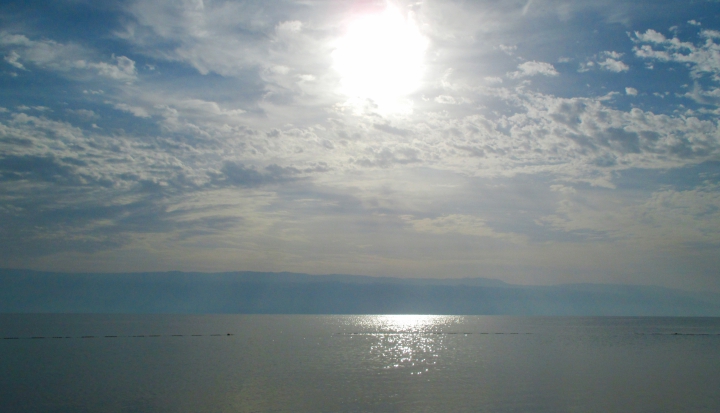 From January 17 until January 27, U.S. Catholic and Catholic Theological Union are cosponsoring a Holy Land pilgrimage that is led by CTU’s eminent scripture scholar and Jerusalem expert, Franciscan Father Leslie Hoppe. U.S. Catholic’s popular scripture columnist Alice Camille is also accompanying the group and leading prayers, reflections, and discussions. She is filing blog posts from the trip. Here is a recap of her day at the Dead Sea:

The T-shirts announce that Israel is a story told in three seas: Red Sea, Dead Sea, Med Sea. On the T-shirts, at least, the story is told with three accompanying fishes. The Dead Sea fish has comic-book crosses in his eyes indicating he’s reached his expiration date. The actual Dead Sea is a much more beautiful reality.

Some members of our group just needed to touch those famed muddy, salty waters. Are Sodom and Gomorrah, notorious twin sin cities, really at the bottom of this oily lake? Did Lot’s wife look back on the life she loved and turn to a pillar (technically a tufa) of salt? Did Abraham try to talk God out of the destruction, giving the definition to chutzpah?

Of course, some members of the group were unburdened by great biblical questions and just wanted togo for a swim.