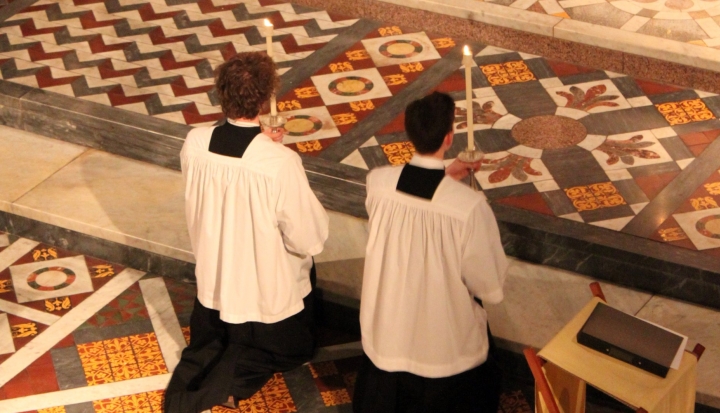 A news story originating in The Monitor of the Diocese of Trenton, New Jersey about a special group of “elite” altar servers has been making the rounds today. The article details the oddly named “Guardians of the Altar,” a team of highly trained super-servers who assist Trenton Bishop David O’Connell when he celebrates special  Masses in the diocese’s cathedral. [Full disclosure: I previously worked under Bishop O’Connell in Trenton and am a former editor of The Monitor.]

Over at the blog Pray Tell, Rita Ferrone takes issue with the “Guardians”, as she writes:

“Funny, but everywhere else general, all-purpose acolytes are able to handle these services just fine. Good training should be de rigeur for all liturgical ministers, especially servers. I have seen it done extremely well at the parish level and in cathedrals.

Isn’t it ironic that while Pope Francis is cutting down on ranks of monsignors, the bishop of Trenton is inventing new ‘ranks’ for — altar servers! Apparently creating elites, not service, is what sells.

But it isn’t just the creation of a class system among altar servers that is causing the uproar. The bishop’s elite team is in part designed to promote vocations, so in other words, boys only. As far as I know, girls are still welcome to be altar servers in the diocese–just not Guardians of the Altar. But this touches on the controversy that made its way around the country in 2011 as a few parishes started banning female altar servers entirely.

There’s no word yet on whether you can expect to see an expert altar squad assisting a bishop near you anytime soon.