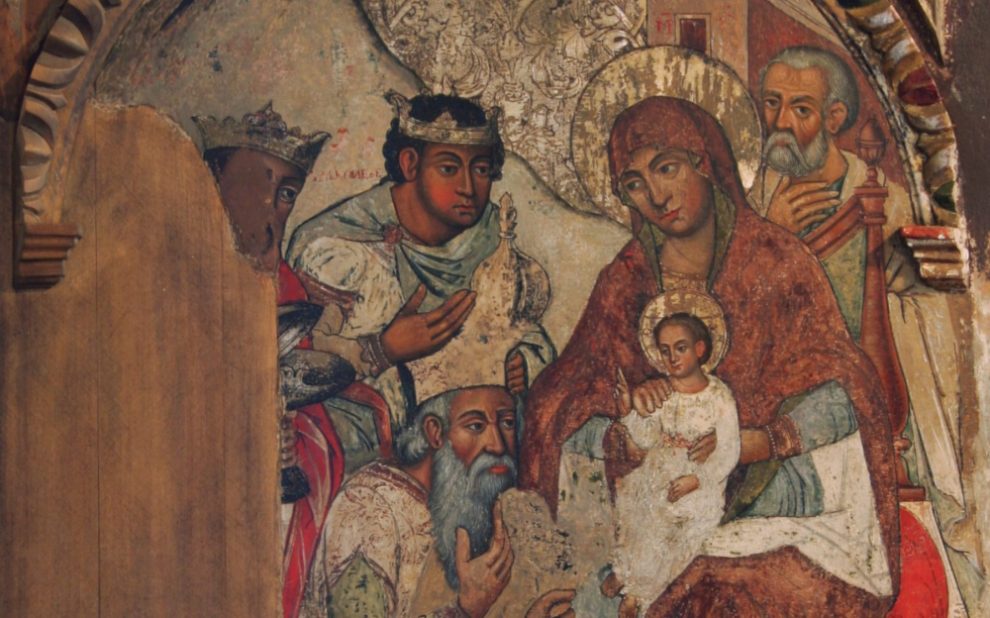 Most of us have seen Christmas pageants where children dress as the magi wearing crowns and carrying gifts, while those watching sing the carol, “We Three Kings.” The first verse, which describes the various terrain and obstacles they had to navigate as they followed a star to reach the infant Jesus, is so familiar that most of us can recite it from memory.

In the following verses, each of the magi tells about his particular gift and its meaning. The fourth verse, sung by the king traditionally named Balthazar (often depicted with Black skin), strikes a discordant and even disturbing note:

As some of my friends would say, “Talk about a buzzkill!” This is not the typical sentiment one would expect at a birthday celebration. One can only wonder what Mary and Joseph would have thought if they heard a strange visitor from a faraway land give so bleak a prediction for their child’s life. No wonder this verse is often omitted at most Christmas pageants and celebrations. It seems so out of step with the joyful character of the season.

Yet, there is profound theological wisdom in this verse. In ancient times, myrrh was an ointment used as an analgesic or painkiller. Sometimes it was burned in the rooms of sick people to aid in their healing. The gospels relate that Jesus was given a mixture of wine and myrrh as a medicine while he was dying on the cross. Middle Eastern cultures also used myrrh in embalming their dead. Thus the gospels speak of how the female disciples used this oil on Jesus upon his death. Some scholars believe that myrrh was given to Jesus by the magi because its bitter taste represented the difficulties, suffering, and trials he would face in his life. It also, as the song states, foreshadowed his death.

This verse, then, resonates with the consensus of scripture scholars who state that the passion narratives, that is, the accounts of Jesus’ suffering and death, are the oldest parts of the gospels. The accounts of Jesus’ birth were written later and written in light of the cross. The shadow of the cross looms over the crib, symbolized by a funeral ointment being gifted to a newborn child.

Although this verse of a familiar Christmas carol may make us uncomfortable, it underscores an important faith conviction. The incarnation was not an illusion. Jesus did not pretend to be mortal and vulnerable. God became truly human. Jesus shares fully and completely in our human condition, including its tragedies, betrayals, and injustices. “Sorrowing, sighing, bleeding, dying”—these are not all that it means to be human. But for many, if not most of us, these are inescapable realities that we must endure.

Just as the cross looms over the crib, so does the light of resurrection shine upon it. The resurrection is God’s assurance that tragedy and death are not the final realities of the human condition. These are not God’s will. In raising Jesus from the dead, God shows that human beings are summoned to work to struggle against the horrors and afflictions that trouble so many. God vindicates the healing and saving ministry of Jesus and shows us that his way of being human is the pattern for our lives as well.

I think of this as I contemplate the almost 20,000 migrants who now live in New York City, my home, having been bused (more accurately, dumped) here by governors in Texas and Florida. My heart aches as I witness fellow human beings in dire need being treated as pawns in a political chess game. Many are children who have already seen more affliction or suffering than anyone should see in a lifetime. The shadow of the cross is real for them.

This omitted verse of a Christmas carol reminds me that the feast is not a time for glossing over the tragedy of life. Joy is not the same as fantasy. Rather, the grace of Christmas lies in its power to open our eyes to the needs and injustices that afflict the most vulnerable. And then to offer our myrrh, our balm, as we attend to their needs and work for a world where all are treated as the precious children of God that they are.

The grace of Christmas is that the cross looms over the crib, just as resurrection’s light shines upon it. The birth, passion, and resurrection of Jesus show us what it means to be authentically human. That’s an insight worth celebrating in song.