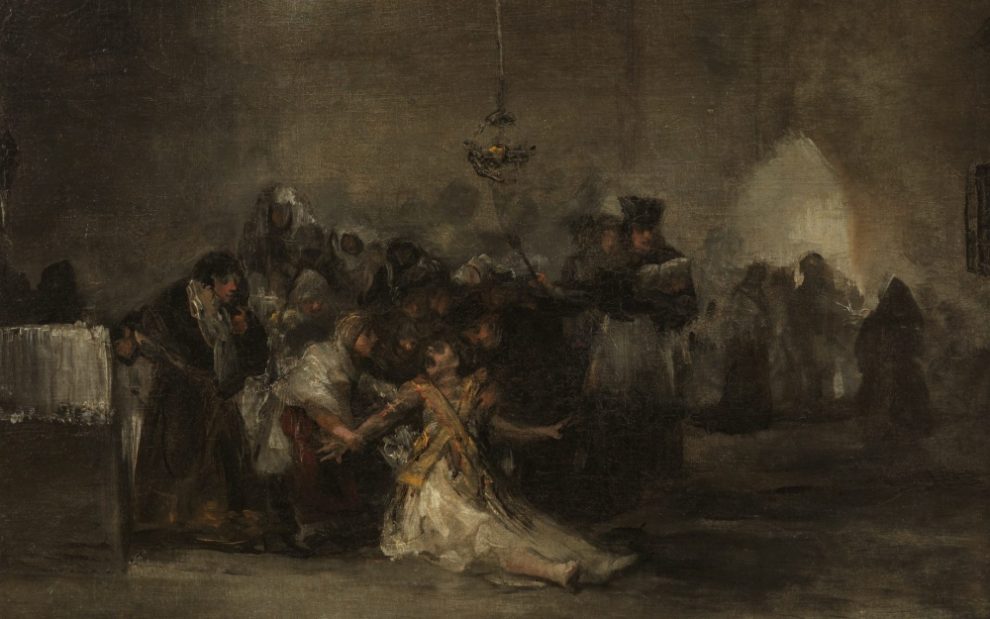 I recently found myself in conversation on St. Pope John Paul II’s classic 1999 Letter to Artists. In it he writes about how these “ingenious creators of beauty” contain “something of the pathos with which God at the dawn of creation looked upon the work of his hands.” Artists have the special vocation, he insists, of bringing beauty and goodness to life in the world.

I don’t think the pope had the horror movie Hellraiser (1987) in mind, though I could spot the blood between the lines. St. Pope John Paul II insists early on in his letter that faith “can be enriched by artistic intuition.” He cites St. Francis of Assisi’s ecstatic praise upon receiving the stigmata: “You are beauty. . . . You are beauty!” “In things of beauty,” St. Bonaventure went on to say, “[Francis] contemplated the One who is supremely beautiful.”

Paint me depraved, but I couldn’t stop myself from describing in vivid detail what sparked this meditation on divine beauty: Piercings and pain. Blood seeping from open wounds. St. Francis had come face to face with a six-winged Seraphic angel who had supernaturally speared him on the side of a mountain. His body bled for the rest of his life, which was painful and didn’t last much longer. He was holy like Jesus, suffering like the incarnate God who had been tortured, stabbed, and executed more than a millennium before. This was not the sort of “beauty” we’re accustomed to today. This seems the stuff of horror movies!

These sorts of gory stories are, of course, common fare in the lives of the saints. They’ve been hallmarks of Catholic devotional literature for ages. Yet, today, you’d be hard-pressed to find this kind of pop culture content anywhere other than in horror. Indeed, one of the most popular films to capture this kind of bloody beauty—Mel Gibson’s The Passion of the Christ (2004)—feels a whole lot like a horror movie. Rose Glass totally gets this, and her incredible film Saint Maud (2021) plays on how out of place—indeed how deeply disturbing—mortification of the flesh is to our secular modern sensibilities.

Although it may seem a weird thing to say, horror often operates as a kind of demented devotional literature. Let that soak in for a second. Sometimes this devotional impulse illuminates alternative ways of understanding our world—alternatives to many of our most comfortable and comforting assumptions about the world and our place in it. Horror also compels us to face facts about ourselves that we fight so hard to forget, especially when it comes to the terrors of life itself. Give horror a chance this Halloween and see yourself and your world anew. Even (especially!) if what you see scares you.

Religious aversion to horror has always been funny to me. In a very real sense, there is no more devoutly religious corner of our culture. OK . . . maybe not the Saw (2004–2021) or Human Centipede (2009–2015) franchises. (Maybe.) But when we’re talking about tentacular creatures that drive us to madness, monsters that creep and crawl out from the depths, demons and ghosts and gods and antigods, we’re talking about an art devoted to the idea that there is so much more to the world than we think. It exceeds our comprehension, and that can be terrifying.

This impulse is what first drew me to horror. Exorcisms and haunted houses and paranormal activity entrance me. The idea that encounters with Evil (with a capital E) might strengthen one’s faith seems to me both a compelling inversion of expectations and a logical extension of our theologies. People may have boycotted The Exorcist (1973), but anyone who has seen the film can tell you that it is about faith. This theme courses through supernatural horror. There’s always a skeptic whose doubt turns to faith, oftentimes spectacularly too late.

“Fine. OK, but it’s just a movie,” the naysayers may note. Supernatural horror doesn’t like to let you rest that easy, though. It operates on the blurry boundary between fact and fiction. The Exorcist was shot by a documentarian as if it were a documentary. The Blair Witch Project (1999) burst onto the scene with a viral campaign aimed at convincing moviegoers that this “found footage” was real. The Conjuring (2013) opens and closes by insisting that what we’re watching actually happened. You don’t have to take our word for it, the film seems to say. Ed Warren is a church-approved demonologist!

If our devotional lives lead us into a universe so much bigger than we could possibly imagine, horror movies do this too. They’re alive with a feeling of possibility, that sense that any on-screen space might be home to someone or something just waiting to acquaint itself.

The tree line of a forest. The middle of an empty field. A sewer drain on the side of the street. The window of a house. The end of a hallway. The corner of your bedroom where the light can’t quite reach. Your mirror! We pass these otherwise innocent places each day. Horror movies populate them with potentiality. Our activated imaginations ensure they’re never quite empty.

We hear “horror” and think death. Ironically, no genre is better at bringing the world to life. That’s why it’s so hard to walk back to your bed after a late-night fright fest. You’ve made the trip countless times, but now you can’t quite remember whether you locked the doors. You’re pretty sure that when you look in the mirror you’ll be the only one standing there. But try telling your body “it’s just a movie” in that moment.

Horror returns to the world so much we’ve been conditioned to forget. Whether we’re talking ghosts, demons, or the Devil himself, horror shatters our secular assumptions about what’s possible. It breaks through the guardrails. Spirits reach out. The earth screams. Statues cry.

These movies do something else too. The more my research has led me into human horrors, the more I’ve been drawn to their ethical imperatives. I love a good jump scare. But what brings me back again and again is horror’s willingness to linger on the evil that underwrites so much of our world. In lingering it compels us to see what we’d rather ignore.

Horror reveals ourselves to ourselves in ways that make us deeply uncomfortable. It grabs us by the shoulders and refuses to let us look away. Maybe it’s the cold calculation of Hannibal Lecter or the malignance of Michael Myers. Perhaps it’s the callous cruelty communities unleash on outsiders, say, in a zombie movie, or, more to my point, the self-righteous exclusion of a religious congregation in a miniseries like Midnight Mass (2021). When we dare to ask the monsters “Who are you?” the answer remains the same. To quote Jordan Peele, “They’re us.”

Horror may be maligned for this unflinching quality, accused of glorifying gratuitous violence, dismissed as pornography. Beneath those accusations is the fear that they hit too close to home. These movies insist, in a short runtime, that we truly see what humans and our institutions are capable of. Dismissing them is a defense mechanism, an attempt to protect ourselves us from the more harrowing conclusions we might draw.

This, oddly enough, brings me back to St. Pope John Paul II’s letter. St. Francis’ stigmata is not the only blood dripping from this document. The pope offers a crash course in the history of Christian art. Midway through the letter he pauses to reflect on the “extraordinary artistic flowering of Humanism and the Renaissance.” The very Vatican from which he writes stands as a “powerful expression of sacred art, rising to heights of imperishable aesthetic and religious excellence.” Raphael’s Disputa. Michelangelo’s Sistine Chapel. Bernini’s colonnades. St. Pope John Paul II cites them as evidence of the sort of sacred beauty that raises our eyes to the heavens in praise. They are also monuments to conquest and cataclysm.

Popes codified the so-called “doctrine of discovery” in the decades that preceded these artistic triumphs. In 1452 Pope Nicholas V issued the papal bull Dum Diversas. It authorized Portugal to “invade, search out, capture, vanquish, and subdue” Muslims, pagans, and all “other enemies of Christ.” It blessed land theft. It sanctified enslavement. When Christopher Columbus returned from his inaugural transatlantic adventure in 1493, Pope Alexander VI proceeded to divide this “New World” among Catholic empires. Indigenous Americans and Africans were exterminated and enslaved in the coming centuries on a scale that exceeds our wildest nightmares.

The renaissances, enlightenments, and revolutions that birthed our modern world were built on a bedrock of bones. Raoul Peck captures the perversity of this history in Exterminate All the Brutes (2021). Here is a horror movie of an altogether different sort. It is a documentary. “The more European merchants and mercenaries bought and conquered other men and women in the Americas,” Peck notes, “the more European philosophers wrote and talked about ‘Man.’” No horror movie could come close to the devastation humans have wrought in the name of God and the church.

Maybe this seems like a swerve, but horror insists we see it. As Aislinn Clarke, director of The Devil’s Doorway (2018), puts it: “Horror is the slow, dawning realization that the worst thing is true.” So this Halloween make sure you do your devotions and watch some horror. May it expand your sense of all that’s possible and awaken you to the horrors you pass by every day.

Matthew J. Cressler is associate professor of religious studies at the College of Charleston. He has written for America, The Atlantic, National Catholic Reporter, Religion News Service, The Revealer, Slate, and Zocalo Public Square. You can find him on Twitter @mjcressler.