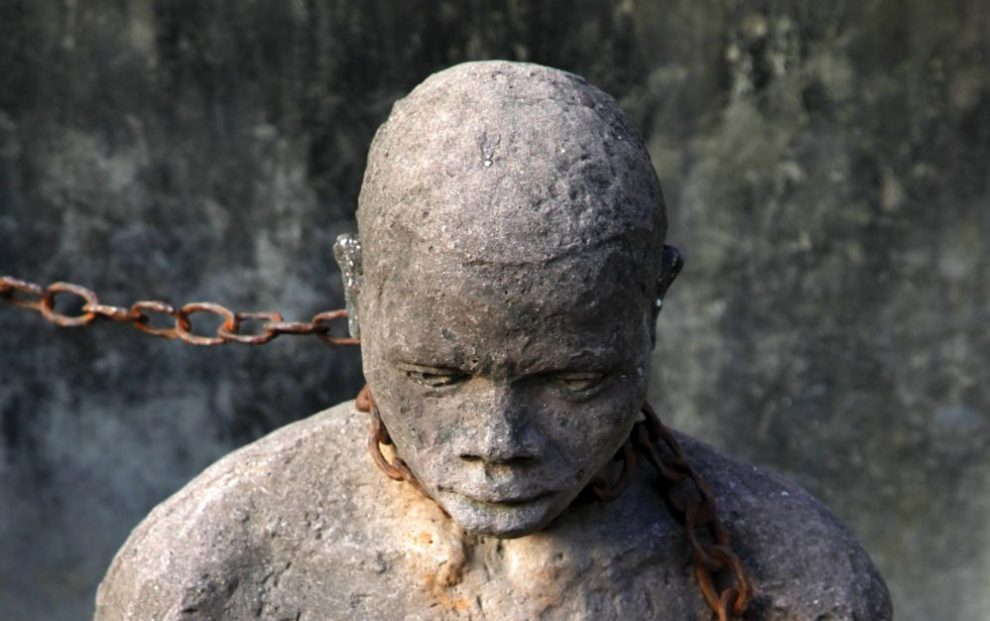 When I was a child, my grandmother began each story with these words. Her stories about the past taught me lessons for my own life. Now, as an adult, I often meditate on my grandmother’s tales, not because of sentimental nostalgia but because memory is a bridge that allows me to gather strength and wisdom from those who lived before me. In doing this, I engage in sankofa, the African tradition that means “return to your past in order to move forward.”

This practice comes from my African heritage, but it is also a Catholic one, embedded in our central sacrament. The Eucharist is an opportunity not only to remember Jesus but also, according to Pope Benedict XVI, to take us beyond ourselves “into the communion of saints of all times and places.” This month, as we focus on Black Catholic history, the power of memory brings us into that communion. And so, I ask you to join me in remembering a story of my people.

Two hundred or so years ago, the Igbo people of West Africa were not so different from us today. They had dreams and ambitions, hopes and fears. Like all human beings, they could be cruel (just as we can be) and their culture was not perfect (just as ours is not). Nevertheless, they laughed and talked with their friends; loved their children and worried about them; fought with their spouses and made up; did their work with both satisfaction and grumbling; and worshipped a God they loved and trusted.

And then everything was taken from them. Slave traders captured thousands and thousands of them: women, men, and children. Their heads were shaved, and they were stripped naked. Even their names were torn from them. More than 1 in every 10 of them died in the crowded ships that carried them across the Atlantic Ocean.

The number of humans who lost their lives because of slavery is too immense to comprehend. The official United Nations’ estimate is 15 million, but, according to the World Future Fund, some scholars believe 150 million is more accurate. Still others claim the number is far smaller—6 million or perhaps 11 million. Whether it’s 6 million or 150 million, it’s difficult to grasp the sheer enormity of this genocide. Maybe a better approach would be to remember the last time someone you love died. Now imagine that happening over and over and over, one beloved individual after another, each one infinitely precious.

As Catholics, we cannot shake our heads in sorrow and then turn our thoughts away from these murders. Instead, as Pope Francis reminded us in a 2014 sermon, we are called to pray for those who were murdered, “in particular by offering the celebration of the Eucharist for them: it is the best spiritual help that we can give to their souls, particularly to the most abandoned ones.” This remembering, said the pope, is a “testimony to confident hope, rooted in the certainty that . . . humanity is destined for a life without end.”

So in this story, we remember 75 Igbo people who survived the journey across the ocean. On a spring day in 1803, they staggered onto land for the first time in some 80 days. They were probably thinking that whatever came next couldn’t be worse than what they had already endured. At the Savannah, Georgia slave market, however, as they talked with fellow Africans who had been in this strange world longer, they realized their future held nothing but more sorrow.

The 75 Igbos were sold, as if they were a herd of animals, to a rich white man. Then they were packed onto another ship, a smaller one, to be sent 80 miles south to the white man’s plantation.

Below deck, the Igbos shared all they had learned at the slave market. Their chief, who was in the group, led his people in prayer, reminding them God was with them, as were their ancestors. Then, as they talked together in whispers, a decision took shape: They would risk their lives by snatching control from their captors.

A single person alone would have never attempted such a thing, but together—connected to God, to one another, and to their ancestors—they forced the white men off the ship. While the Igbos were still shouting in triumph, however, the ship ran aground. When they disembarked, night was falling, and they could see no path through the thick undergrowth that edged the water.

Like all Africans, the Igbo people believed water was not only the source of physical life but also a conduit to God. And so, trusting in the Water of Life, each of the Igbos took up the chant: The Water Spirit brought us. The Water Spirit will bring us home. Their united voices became a single voice as they walked together into the darkness, toward the deep water.

If you’re white, you may have heard that St. Simons Island on the Georgia coast was the site of these people’s mass suicide. But if you’re Black, you probably know a different ending to the story. In this version, those 75 Igbo people didn’t drown. Instead, they walked on the water, just like Jesus. And then something even more miraculous happened: Feathery wings burst from their shoulders, lifting them into the air. According to an interview from the Georgia Slave Narrative Project, the people rose up “into the air with a great shout; and in a moment were gone, flying, like a flock of crows . . . miles on miles, until they passed beyond the last rim of the world.”

It wasn’t a mass suicide. It was a journey from death to life. The 75 Igbos crossed over from hopelessness to hope.

This story has given hope to generations of Black people, assuring us that death is not the end. This is what Pope Francis was talking about, and it is the same hope Jesus gives us in the gospels.

Hope in the Bible is often connected to remembering. The psalmist wrote, “For you, O Lord, are my hope. . . . From my birth I have leaned upon you. . . . I remember the days of old; I think about all your deeds” (Pss. 71:5, 6; 143:5). When we look back and see the ways God acted in the past, we gain spiritual energy for the road ahead. Like the Igbos who marched into the darkness, we enter the future with our heads high. We face even death without fear. This is the biblical meaning of hope.

And so, during Black Catholic History Month, let us pray for those who suffered terrible oppression and sorrow, even as we affirm and honor the spiritual wisdom and power that is their legacy. We look backward—and in doing so, we unite our hearts with the larger communion of saints. Like the 75 Igbo, we draw courage and inspiration from our unity with one another, a unity that exists across time and space, that’s held within the timeless love of God.

Alone, we would be too weak to fight injustice—but together, connected to God, to one another, and to those who went before us, we can do amazing things. “I remember,” we tell one another. We return to the past so we can move forward.