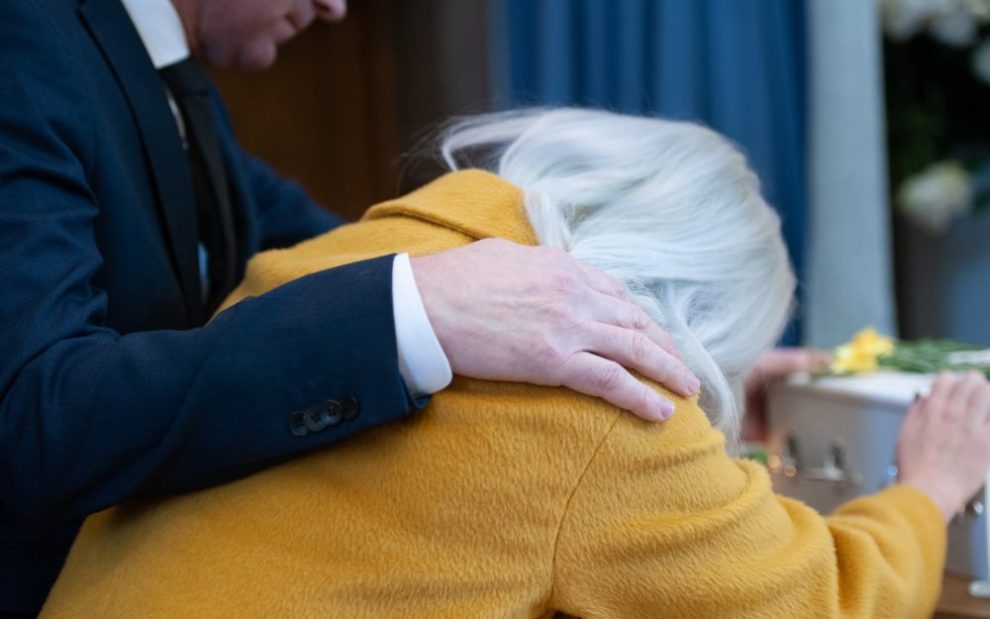 My husband and I carried the small white coffin into our bedroom. It was light. Either one of us could have managed it alone. Our daughter was 28, but she was tiny: under 5 feet and less than 95 pounds. The coffin—a wooden box, handmade that morning—was “child-size.” The lid was attached with two thin nails. We squinched it up and off with a few tight back-and-forth motions—he holding one end and I the other. Our eyes met as the lid came free: a dull moment of recognition between us, like citizens from the same country meeting in a foreign land.

Ravi and I aren’t from the same country. Although we have lived together in India for 40 years, I am an American, an obvious foreigner here. Today, however, neither of us could remember where in the world we came from.

With the lid of the coffin resting on the floor, I searched the linen cupboard for just the right softness of blanket. I had never done this before. I had buried both my parents, but in America we outsource the details. I had not had to line their coffins with padding or lift their bodies into them. They were carried away on stretchers by professionals and reappeared two days later in new clothes, wearing unfamiliar makeup. It wasn’t strange. It was how we do it.

Here in India, we do everything ourselves. Moy Moy’s body had been bathed by her own family and friends, and now it lay in the living room in a refrigerated coffin loaned to us by a Sikh charity. That coffin had a clear domelike lid—inside, she looked like Sleeping Beauty.

Cathleen, our middle child, helped me select a soft, thin quilt for the bottom of the wooden box. As we smoothed it out, tucking it along the sides to fit neat and square, I found a little bundle of nails wrapped in a red cloth and taped to the side wall. I remember this now, three years later, but at that moment I took the bundle off the wall without registering it and put it aside. I was intent only on getting the coffin ready.

We had been preparing for this moment for the past 20 years. When Moy Moy was 9 and having multiple seizures every day, our pediatrician told us she probably only had months left to live. Ravi and I stumbled through those blurry, hollow days with that news, just barely able to hold it together.

I looked after the children, fed the dog, made the meals, went to work. But one day, while selecting carrots at a sabzi stall, I looked at my own hand and wondered to whom it belonged. I had no idea what I was doing or why.

Ravi chaired a high-powered meeting in Delhi—microphones at every seat—on the verge of tears. He went through the agenda, asked for supporting evidence, took the votes. He had no recollection of what was decided, who had said what, or what he had agreed to.

Moy Moy survived that crisis and sailed on for two more decades. But we never felt at ease again. A white noise of dread hummed in the back of our minds constantly: sometimes a thin whine, sometimes a full-throated siren. Always there.

At a rare breakfast alone one morning (the children in school, Ravi’s mother visiting her other son), I told Ravi about a recent conversation with our pediatrician: “Linda says Moy Moy may be losing her vision. She’s not sure. She wants to do some tests.”
Ravi looked away. I stared down at my coffee. He turned back to me, and I looked up at him at the same moment. We cried.

Moy Moy was adopted. Anand and Cathleen were homemade. We knew that her disabilities would limit their lives and wondered about the impulsiveness that had impelled me to say yes to taking her. It had been my decision, not Ravi’s, and now we were all living with it.

I grew up this way. My parents were Catholics who took their faith seriously. They had taken people in our whole lives. The young woman with mental illness. The pregnant teenager whose parents had thrown her out. The bankrupt uncle with 11 children. The British friend who had outlived her partner and had no one else in the country to live with. When an elderly neighbor’s house burned down and the firefighters asked him where he wanted to go, a bystander called out: “Take him to the McGowans. They take everyone.”

I hadn’t realized as a child how much it cost my parents to do that. I hadn’t connected the impulse of a moment with the conditions of a lifetime and how one careless yes could result in an endless litany of no. Maybe it wasn’t impulsive for them. Maybe it was careful and thought through. Maybe they had known exactly what they were doing.

I hadn’t. I had just heard about a baby needing a home and said yes, expecting it to all work out, that my husband would agree and the baby would be as perfect as our other two.

Ravi told me right from the start he wasn’t on board. He told me if I wanted to do it, she would be my responsibility. For years I held his honesty against him. For a few of those years, he even kept his word. But Moy Moy had her ways.

As a baby and toddler, she was fetching, ridiculously cute. She had a surprising sense of humor for her age and could convert even the most determined. But her disability was degenerative. From walking, talking, and making jokes, she declined slowly, definitively. By the time she had gone completely silent and moved to diapers, to a wheelchair, to a G-tube, we were all helplessly in love.

We got stronger out of habit. Less sleep, more lifting. Long years of separate travels, only for work. One of us always at home. We cultivated a passion for jigsaw puzzles—enjoying the straight borders, the click-tuck of pieces snapping into place, the chaos being herded into the pattern of tents on a beach or doors in Dublin.

We took turns at night, waking the other only if essential. We took turns with the squalid necessities too and developed not just a tolerance for the daily rituals, but an affection. We became experts in things we had never heard of—chest physiotherapy, tube feeding, impacted bowels—and made lifelong friends with people we never would have met had it not been for Moy Moy.

Travel was difficult, so everyone came to us. Ravi once said Moy Moy was the invisible thread drawing us home and binding us together.

When Cathleen got married in the United States, we took Moy Moy for the wedding. On the plane we were like a surgical SWAT team: feeding her through her G-tube, changing her diapers, stretching her stiff limbs, each anticipating what the other needed without requiring words, doing whatever had to be done like seasoned pros.

We were proud of ourselves. We felt valiant, as if our love for her and for each other was a potion and shield. It gave us powers and protections our 59- and 71-year-old bodies shouldn’t have possessed.

That trip was her swan song. She died less than a year later. We had lived through losing her so many times we thought we would be prepared when it actually happened. Nothing prepared us. We fell apart. But we managed to do it together.

At the cemetery, there was a reassuring, behind-the-scenes guy. He ensured the grave was dug and the ropes to lower the coffin were in place. Unobtrusively, he directed the Hindu, Sikh, and Muslim mourners where to stand and what to do. Most of them had never attended a Catholic funeral before. Many had never seen a cemetery.

He came quietly to me as the lid was placed on the coffin. “There was a little bundle of nails inside the box in a red cloth,” he whispered. “We need them to fasten the lid. Do you have it?”

“It doesn’t matter.” He and Ravi said it simultaneously.

He said the words out loud, but it was Ravi’s voice I heard, though he was on the other side of the grave and hadn’t even heard the question. It was Ravi’s assurance I felt as the lid went on attached only by the same two thin nails we had earlier squinched out. I knew with his certainty that the lid would hold, that those two nails would be sufficient for the slow, shaky, hand-propelled descent into the earth. I knew the lid would not slip off, that she would be safe until the end. The coffin bumped back and forth a little as it went down, then settled into the ground, beyond our reach, far beneath our feet. Ravi’s eyes met mine across her grave. For as long as we had had her, she had been safe and loved. We had been her champions.

When we got home, I found the little bundle of nails exactly where I had left it, on the bed she had shared with us for 28 years.

I still have it. It sits in a small pouch with my earrings and necklaces. I’ve never opened it, never untied the knots keeping the nails in one tight bunch. But the red cloth grows softer each year and the sharp little nails protrude.

I don’t mind. My fingers graze against them sometimes as I search for my earrings or the ruby pendant Ravi gave me on our 25th anniversary. The red cloth contains them and the sweet, bright jewels keep them company: joyful, though mindful of the facts.

Jo McGowan is a writer by profession and the founder and director of the Latika Roy Foundation, a voluntary organization in northern India for people with disabilities.