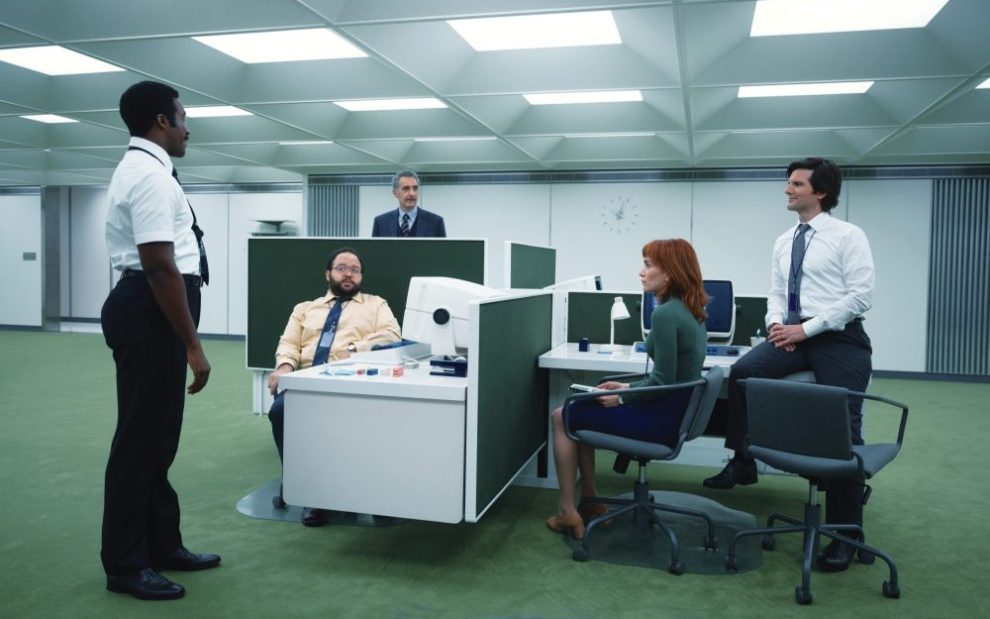 Before the COVID-19 pandemic, work-life balance was a term corporations used to lure new hires but an evasive concept to operationalize in day-to-day cubicle life.

Analysts predict the workplace has changed forever: Zoom instead of air travel and commuting. Flexible hours that let parents work after their kids are in bed. Working from home—or anywhere. Heightened awareness that employers should support workers’ mental health.

Corporations that promoted work-life balance as long as it didn’t interfere with productivity suddenly scrambled to reinvent themselves—and sublet all that empty office space. The pandemic taught us that workplaces could be reinvented to be more flexible, productive, and humane.

A new Apple TV+ series, Severance, sends us right back to work the way it was in prepandemic corporate America. At Lumon Industries, bosses are manipulative and intimidating, employees are distrusted and infantilized, rules are draconian, and work is apparently pointless. Employees in the macrodata refinement department spend their days watching endless numbers scroll by and occasionally drag a few of them to the trash. Even supervisors can’t articulate what Lumon produces and why.

Severance is labeled a thriller, but it’s not thrilling. It’s as interminable as a 9-to-5 workday under fluorescent lights in a barren cubicle.

Believing creativity and imagination make for bad worker bees, Lumon severs workers’ private lives from their work lives with the insertion of a brain chip. The work personality is called an “innie,” and the evening and weekend personality an “outie.” Neither remembers a thing about the other. Mark (Adam Scott) voluntarily elects to have himself severed so he can forget, even for just the daytime hours, the recent death of his wife. Helly (Britt Lower) is a newly severed hire, and we learn about Lumon’s bizarre workplace culture through her neophyte innie eyes.

Having no outside-of-work memories renders employees naïve and malleable. If they ask too many questions, make a map of the maze of hallways, or interact with another department, they’re sent to the “break room” for torture and mind control. Severance makes “good morning” sound like a life sentence.

The disciplined framing of each shot is artful but unvaried. Shots of office life are rigidly composed, relentlessly symmetrical, and starkly lit. Labyrinths of low-ceilinged hallways are identically white, identically unmarked. Rooms are low-ceilinged and featureless. There are no windows anywhere. After an episode or two, this art direction becomes exhausting to endure and fails to deliver additional information about characters or plot. The initial visual elegance becomes visual paucity. It’s claustrophobic to watch. I kept hitting pause and stepping outside for fresh air.

The corporate headquarters looks like a prison: cold, bleak, and gray. And, like Alcatraz, it is inescapable. When Helly tries to resign, she’s escorted to the door, which leads only to more white hallways and eventually back to her desk. It’s not employment, it’s ownership.

A supervisor recites the nine corporate values each night as if they are commandments. The board is unchallenged and godlike, never seen and heard only as unembodied breathing on a speaker phone. Founding CEO Kier Eagan is venerated as if he were Joseph Smith or L. Ron Hubbard (or maybe Charles Manson—let’s wait for season two). Eagan’s giant face is etched into a lobby wall, evoking the famous bas-relief of Vladimir Lenin’s profile. Employees intone Eagan’s not-so-deep thoughts as if they were Bible verses, and the employee handbook is written like scripture: “No workplace shall be repurposed for slumber.” One verse entreats workers to “rise up” from their sick beds and “sally forth” back to work in a jaunty bit of shaming that feels familiar to essential workers who soldiered on without adequate PPE.

When innies leave the building, they become outies, dwelling in a dark, wintry, and barely lit world. Private life is so gloomy, we wonder why the characters miss it.

Ben Stiller directed most episodes and makes his points, slowly—oh, so slowly. Content feels stretched, episodes drag, and tension wobbles. The “thriller” often veers into satire with goofy details such as a corporate department dedicated to raising baby goats or the most coveted employee award being a waffle party. Mark’s boss, Harmony Cobel (Patricia Arquette), leers, jeers, and throws mugs at people. But everyone is creepy and no one is likable, so she seems normal, not scary.

Lumon’s departments distrust each other to bizarre degrees of othering, which may not be so unrealistic (ever live through a corporate budget cycle?). The head of the optics and design department, Burt Goodman (Christopher Walken), reveals that his staff believes another department’s workers have marsupial pouches that house larval offspring.

Severance is labeled a thriller, but it’s not thrilling.

Eventually, Mark’s colleagues—Dylan (a marvelous Zach Cherry), Helly, and Irving (the always-intense John Turturro)—dare to venture out as innies to learn who their outies are.

This isn’t the first Lumon rebellion. The department printer mysteriously spits out paintings of a rumored intradepartmental uprising, The Grim Barbarity of Optics and Design, with bloody men in ties and ID badges disemboweling each other like some historical mural of a battlefield.

Severance’s premise that individuality is the enemy of corporate productivity feels weary. Been there, Aldous Huxleyed that. Maybe Lumon cranks out soylent green, or maybe all the humans are really robots. After nine dreary episodes, we still don’t know.

The useless “rewards” handed out to appease the workers—notebooks, finger traps, and food cart breaks for melon balls and deviled eggs—underscore what workers feel right now. Enough with the gimmicks already. Pay us a living wage, give us meaningful work, and let us stay home when our kids are sick.

If you’ve never had a soul-stealing job, watching Severance will grant you that experience. If you binge it, you’ll need antidepressants and a lot of chocolate.