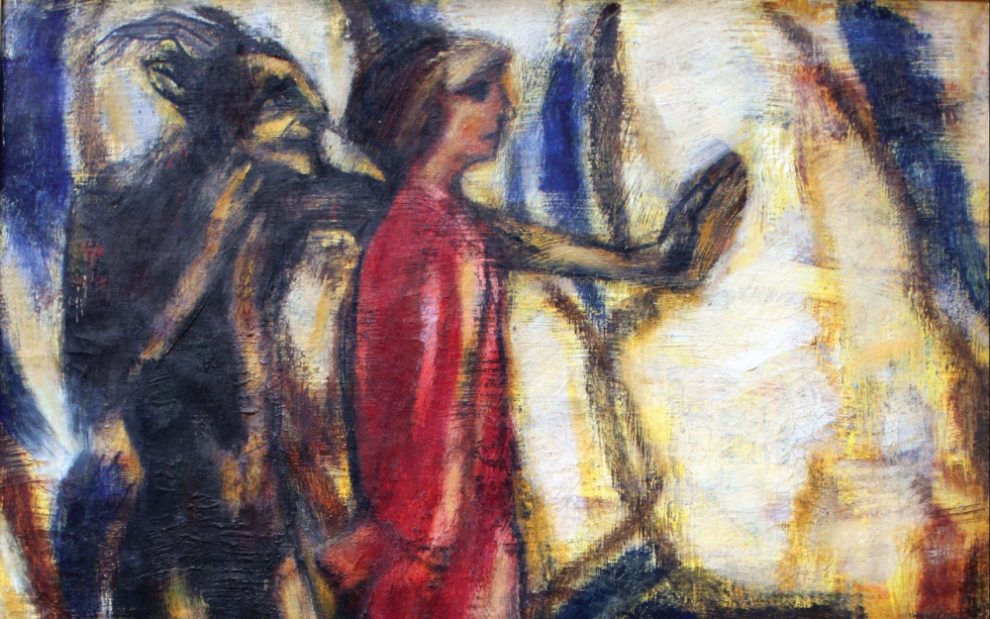 My friend in Buffalo wrote me on the day an 18-year-old murdered 10 people at a small supermarket there. She was heartsick and shaken at the violence but also appalled at the idea that such intense racial hatred existed so close to her—in her city, her community that suddenly felt less familiar, less like home.

White people such as my friend and I may well be shocked at discovering that folks close to us harbor dark passions that are compatible with violent intentions. We don’t know people who feel this way, we think. In our families, neighborhoods, and church communities, people are basically good, peaceful, and civilized.

Then I remember Bill. Tall, well-dressed, and well-spoken, Bill showed up in our parish’s Rite of Christian Initiation of Adults (RCIA) program one year. I was the facilitator of the inquiry sessions that front-loaded the first 12 weeks and was glad to welcome Bill to the group. A dozen folks were considering joining the church that year, ranging from young couples seeking to get their “Catholic papers” in order for an upcoming wedding to older people who’d thought long and hard about making a faith commitment and were finally ready to do it. Bill fell into this latter category.

Running the inquiry sessions was my favorite part of RCIA. These commitment-free nights explored topics pertaining to a Catholic way of life. Each night we’d talk about some theme: God, the Bible, the church, Mass, prayer, sacraments. We’d zero in on topics of curiosity: Why do Catholics have such a thing about Mary? What’s up with the pope? We’d also explore pragmatic themes such as the church’s moral teaching and the contents of our creed.

The inquiry nights gave folks raised in other faith traditions, or with no religious background, the chance to explore Catholic thought in a judgment-free zone. We’d get to know one another, practice building community, and examine the range of elements that make up Catholic Christian living. After three months together, if group members wanted to continue, they moved into the catechumenate and began a more deliberate formation process leading to the Easter celebration of initiating sacraments: baptism, first communion, and confirmation.

Bill was a great addition to our group. He was an EMT whose specialty was in ferrying donated organs around the country to hospitals performing transplants for desperate people. As Bill explained to us, a heart lasts no more than 6 hours after removal, a kidney up to 36. These urgent missions of mercy made him a sympathetic candidate for a life of faith. Bill worked on the razor’s edge between life and death and had plenty of time to contemplate mortality’s limits.

Having spent a decade working with inquirers, I was used to newcomers’ shyness, cautiousness, or uncertainty in our midst. After all, to non-Catholics, nothing could be weirder than hanging out with Catholics. Some people admitted they hadn’t told family members, friends, or coworkers what they were up to. Many were adamant in insisting they were here to window-shop and feed their curiosity. My job was to make them all feel comfortable with us, however long they remained. It was always fascinating to me which people bailed after the first meeting and which stayed through the Easter sacraments.

Bill wasn’t shy or uncertain. He was determined up front to go all the way and join the church. He was well informed and invested in the decision. He took part in each session’s conversation with enthusiasm and pleasant humor, asked thoughtful questions, and did his informal brand of homework on each topic. In every way Bill was the model RCIA inquirer. I found myself thinking what an engaged parishioner he was going to be.

A few weeks before Easter, Bill mailed me a manila envelope full of magazine clippings. These were articles and letters to the editor that Bill had written over the years to white supremacist resources. I recognized Bill’s style in the printed columns: logical, well-organized, yet emboldened by a cold hatred that shocked and terrified me. It seemed our “model” parishioner-to-be was a card-carrying Neo-Nazi racist.

Horror movies have that scene where an unsuspecting person opens a closet and a half-rotted corpse falls on them. That’s how I felt: brushed with some putrefying touch of death. I nearly fainted when these clippings fell out across my couch. I had admired and liked Bill. We’d shared many frank group conversations about what it means to be a disciple of Jesus, how to pray, the sanctity of each human life. I thought I knew Bill. If you’d asked me for a hundred descriptors of this man, not one of them would have been “hater.”

Along with the clippings, Bill included a letter explaining that he wanted me to know exactly who he was, and had been, before the water was poured over his head at the Easter Vigil. He admitted he was feeling a bit uneasy with his identity these days. He didn’t ask for advice, but I determined it was my responsibility to give it to him.

I sat down and penned a careful letter in the strongest possible terms. I told Bill that the Easter Vigil is a ceremony dominated by the symbol of Christ our Light. The paschal candle illuminates each member of the assembly, all of whom take a small bit of the fire onto their own symbolic candles. The newly baptized do the same in turn, each choosing to becoming the light of the world in their deliberate acceptance of Christ our Light.

These ritual actions—and more importantly, the way of life they signify—were entirely incompatible with the darkness revealed in his writings. I urged Bill to denounce them and put them behind him. I urged him not to approach the Easter mysteries until he had expunged the way of hate from his life. He of all people should understand the irrevocable line between life and death: He was a man who carried fragile hearts, lungs, and kidneys across the country in a race against time every day. The words he’d penned for public consumption were death. I begged him to choose life.

I didn’t see or hear from Bill for five years. Then I accidentally ran into him on the street one day. He saw me first and called to me. From a safe 10 paces away, he told me he’d burned all of his hate paraphernalia: books, magazines, flags, and keepsakes. He said he’d changed. He said it was over. I wanted to believe him and promised him my continued prayers. But I was too afraid to get closer and made no attempt to contact him again.

People of goodwill are understandably anxious these days about the level of violence in our society. At the time of the Buffalo shooting in May, more than 200 similar shootings had already occurred in the United States this year involving four or more victims. They took place in all but a half dozen U.S. states. At nearly two mass shootings a day, we’re on track to surpass last year’s total of nearly 700.

The message can’t be clearer: Hate kills. Darkness claims its victims on both sides of the gun. We have to take the pledge not to allow voices of hate to access us: through news media, on websites, from people we trust. Wisdom saves, but only if we commit to her path. Be a light for the world.