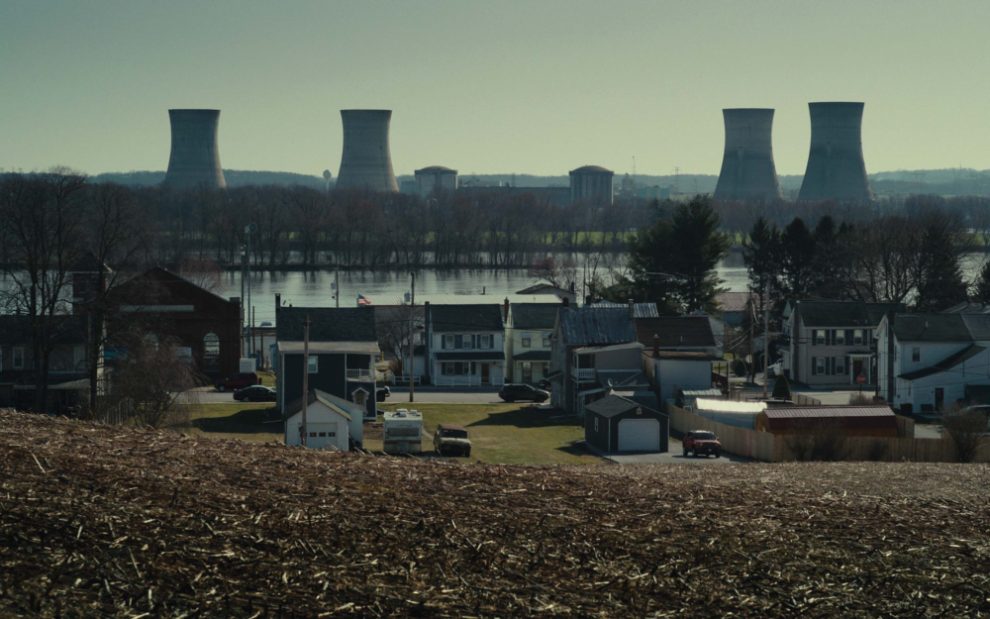 Near the beginning of Meltdown, the four-part Netflix documentary series about the Three Mile Island (TMI) nuclear power plant disaster, a scared-looking, towheaded little boy not more than 8 years old is being interviewed by a TV reporter. The boy has been having bad dreams “about Three Mile Island.” In the dreams, he says, the power plant “blew up.”

That little boy is not alone. Since it was first unleashed over Hiroshima, Japan, 77 years ago this month, nuclear power has haunted many of our dreams and the collective dream life of our culture. From Godzilla, the giant sea monster activated by nuclear weapons tests in the Pacific Ocean, to the giant ants that came from New Mexico in the classic movie Them!, to the Louvin Brothers country-gospel hit “The Great Atomic Power,” the mysterious, invisible menace of nuclear radiation has long been an undercurrent in the stories we tell ourselves. The so-called peaceful atom even has a central role in TV’s longest-running series, The Simpsons, in which the hapless paterfamilias has worked as a nuclear power plant safety inspector since 1989.

In fact, when the TMI disaster occurred in March 1979, it seemed to blend in with our pop culture nuclear nightmares: The real-life meltdown began near Harrisburg, Pennsylvania just two weeks after the release of The China Syndrome, the Jane Fonda suspense thriller about a nuclear power plant disaster.

It’s no surprise that nuclear power plants would become the stuff of nightmares. After all, they aim to harness and contain the heat and radiation generated by nuclear fission—power that can obliterate entire cities in minutes. The spent fuel from the plants can remain dangerously radioactive for millennia. For all this to work, there has to be a fanatical devotion to plant safety and complete public trust. At TMI, as Meltdown shows us, the utility company (Metropolitan Edison) cut corners on safety and lost that essential public trust. Since TMI, only two new nuclear power projects have been licensed in the United States, and neither has actually gone into operation.

So, if TMI stopped all growth of the nuclear power industry, why even bother with this cinematic look back? Well, in the climate change era, nuclear power is not dead yet. Today, reasonable experts, including even the nuclear safety watchdogs at the Union of Concerned Scientists, tell us that nuclear power plants, which emit no greenhouse gases, have to be part of the climate solution.

However, you’ll have a hard time selling that proposition to the TMI neighbors we meet in Meltdown. Joyce Corradi and Paula Kinney, especially, were, in 1979, ordinary mothers who became antinuclear activists. We see them in archival footage as young women, raising hell to protect the community’s children, and in interviews today as grandmothers, still looking back in anger.

These women are countered in the series by regular commentary from Lake Barrett, who represented the Nuclear Regulatory Commission (NRC) at TMI. To this day, Barrett toes the NRC line that nothing really bad happened at TMI. Over and over, he blithely dismisses nuclear critics and their arguments as merely “emotional.”

It’s no surprise that nuclear power plants would become the stuff of nightmares.

Meltdown uses dramatic reenactments to show us what happened inside the power plant on March 28. At about 4 a.m., all the alarms in the plant’s control room started going off. Heat and pressure were rising in the nuclear core due to a valve that was stuck open. To prevent a complete meltdown, the operators released unknown amounts of radioactive gas into the atmosphere over the plant, with consequences that are unknown to this day.

As the series goes on, whistleblower Richard Parks emerges as its central figure. Parks was a nuclear technician brought in by Bechtel Corp. to work on the TMI cleanup in 1982. From him we hear of Bechtel’s plan to lift the radioactive core from the reactor containment building using a crane that had been in place throughout the radiation emergency and had never been inspected or tested. If the crane malfunctioned and dropped the core, it could easily have caused a catastrophic nuclear explosion in an area that was home to 2 million Americans. Bechtel executives didn’t want to take time to inspect the crane because that would delay delivery of the company’s next multimillion-dollar payout.

Parks went up the chain of command at his company and eventually to Barrett. For his trouble, he got his apartment burglarized and marijuana planted in his truck to try and provide a pretext for firing him. Eventually, Parks went public, and political pressure forced the NRC to stop the cleanup until the crane could be evaluated for safety.

On its website today, the Office of Nuclear Energy has a page titled “7 Things The Simpsons Got Wrong About Nuclear.” There we learn that in real life fuel rods are never used as paperweights and cracked cooling towers are never mended with chewing gum. However, as Meltdown shows us, The Simpsons does get one big important thing right. In the cartoon sitcom, the nuclear power plant owner, Charles Montgomery Burns, is a greedy, penny-pinching robber baron who won’t let nuclear safety get in the way of maximum profits. That pretty much sums up the behavior of the Metropolitan Edison executives, who lied to government officials from the first minutes of the accident, and that of the Bechtel titans, who were ready to risk mass death just to keep the money flowing.

At the end of the final episode of Meltdown, Parks, who still supports the prudent use of nuclear energy, puts it bluntly: “We’ll never have a viable nuclear industry in this country until we take the profit motive out of it.”