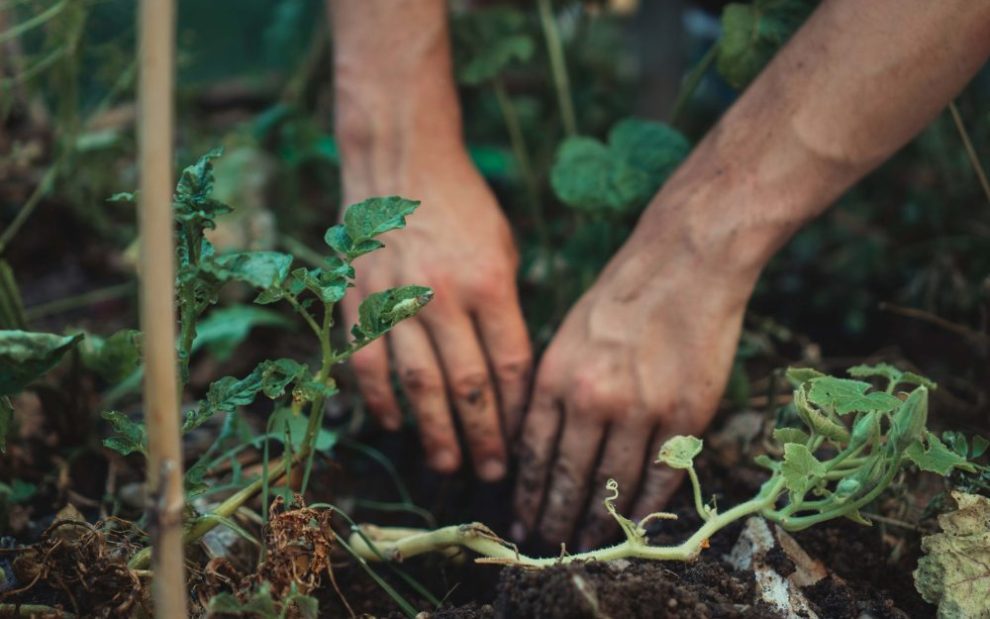 I have never been a gardener. Despite my best intentions, any plants I try to tend typically wither up and die before I can enjoy the fruits of my labor. Perhaps this is because I never thought of gardening as a practice of mutual care. Rather, I have attempted to grow plants for the express purpose of consuming their fruit. But last summer I read Robin Wall Kimmerer’s Braiding Sweetgrass (Milkweed Editions) and began to understand the importance of reciprocity—of receiving all life as a gift and giving myself in return. So I planted a garden and am happy (if somewhat surprised) to report that it flourished. And not only did it flourish, but it also saved me.

Last year, on June 14, I awoke at 6 a.m. to one of the worst text messages I can imagine. It was from my sister: “Please come be with the kids as soon as you can this morning. I’m so sorry. There’s no other way.”

Thankfully, we found her in time.

She was admitted as a psychiatric patient in a nearby hospital and subsequently diagnosed with major depression with psychotic features after a prior misdiagnosis of postpartum depression. This depressive episode manifested for her in severe anxiety, guilt, and hyperactive religiosity. Focusing relentlessly on every sin she had ever committed—even those for which she had been absolved already—and exaggerating them beyond reason, she began to see herself as evil to her core. She became convinced that she lacked a soul and that God had abandoned her due to previous misdeeds. Despite having three beautiful children, her illness made her view life as fruitless and irreparably corrupt.

While my sister underwent treatment, she called me multiple times every day. I am not a mental health professional, so trying to furnish the words that would help her find her way out of that dark place was overwhelming and heart-wrenching. I tried to navigate this role by encouraging her to discuss her perceptions with a therapist, but our conversations left me feeling depleted and helpless. Since I could not care for her in a practical way, I turned my efforts to the garden, which, to my surprise, responded in kind, offering respite, stability, and a reprieve from metaphysical preoccupation.

Although my faith in God never wavered, the usual religious rituals for processing grief were tainted by emotional trauma because of the religiously oriented manifestation of my sister’s illness. Many friends tried to encourage me during this time with reminders of God’s unfailing presence, quoting biblical passages to assure me that God would overcome Satan’s insidious attacks. Sometimes these expressions of spiritual hope were combined with skepticism about the necessity of medical treatment. Certainly, the concern was greatly appreciated, and I have been in the difficult situation of finding something meaningful to say when a friend is struggling—indeed, I was in a similar spot whenever I talked to my sister. Still, I found these sentiments unhelpful.

For one thing, they revealed an unhealthy dualism that separated spiritual activity from physical existence and paralleled—perhaps even contributed to—my sister’s psychoses by keeping an otherworldly focus rather than attending to the present physical illness. For another, cherry-picking Bible verses led to her determination that she deserved to die in the first place. Matthew 18:6 (NABRE) was particularly harmful, and she quoted it often: “Whoever causes one of these little ones who believe in me to sin, it would be better for him to have a great millstone hung around his neck and to be drowned in the depths of the sea.”

At this time, I found traditional religious platitudes exasperating. I felt, viscerally, the Bible’s potential for harm when interpreted rigidly or without attention to such things as social context or original language use. I struggled to pray with a church that, as an institution, has perpetuated such rigid interpretations and the dualistic framework that values spirit over body. Officially, of course, dualism is rejected. Yet aren’t we taught that heaven is the gracious reward for good earthly action? And haven’t atrocities been committed with the purpose of saving souls? In other words, the Catholic faith is one of sacramental imagination, of finding God in all things. But in the way we think and speak, we often separate this life from the one in the next: God abides in heaven, presiding over our world from a throne “up there,” and our bodies are merely vessels to carry our souls through this earth to dwell in divine paradise.

But it was through gardening that I felt the presence of God.

I discovered that the more deeply I connected to the Earth—to pure, physical goodness—the more connected I felt to God.

Turning the compost bin; pulling weeds; breathing in the rich, earthy aroma of soil; and watering plants to foster their flourishing became the essential elements of my daily rituals. As I communed with the cucumbers, peppers, and tomatoes—and all the creatures that made their home among the plants—I remembered that God makes all things good. Not only that, but our goodness does not consist in striving for otherworldly perfection. Instead, it inheres in this life and in our very bodies, which work to carry the world forward toward its purpose: “that they may all be one” (John 17:21, NABRE).

Like a gardener, God beckons us toward flourishing—toward the goodness for which we were created. And this goodness inheres in our physical bodies, not because they are the dwelling place of souls, but simply because they exist. To reflect the image of God, we should embrace the whole of ourselves in our physical reality, living in communion with others and sharing our gifts with this world.

Although I cannot claim to know precisely what a soul is, or whether there is an actual heaven paved with gold or a hell full of fire, I will say this: When my heart was too heavy to think anymore about these questions, the ache was eased by accepting the embrace of the Earth. Coming down from the metaphysical to be present with the material offered a way to cope with the trauma.

Struggling with mental illness, our own or that of a loved one, can be disorienting. But by allowing God to reach us through the steady arms of the Earth, we root ourselves in authentic love and can refocus away from esoteric or otherworldly concerns, connecting to God at the heart of matter.

Kathleen Bonnette teaches theology at Georgetown University and in her parish's children's liturgy. She is the author of a forthcoming book that is part memoir, part theological adventure exploring the Catholic faith through the lens of interconnection rather than hierarchy. The working title is (R)evolutionary Hope: A Spirituality of Encounter, Conversion, and Transformative Grace, and it will be available next spring. Visit her website evolutionaryhope.wordpress.org or follow her on Twitter/Instagram @kbonnette_thd to learn more and connect.