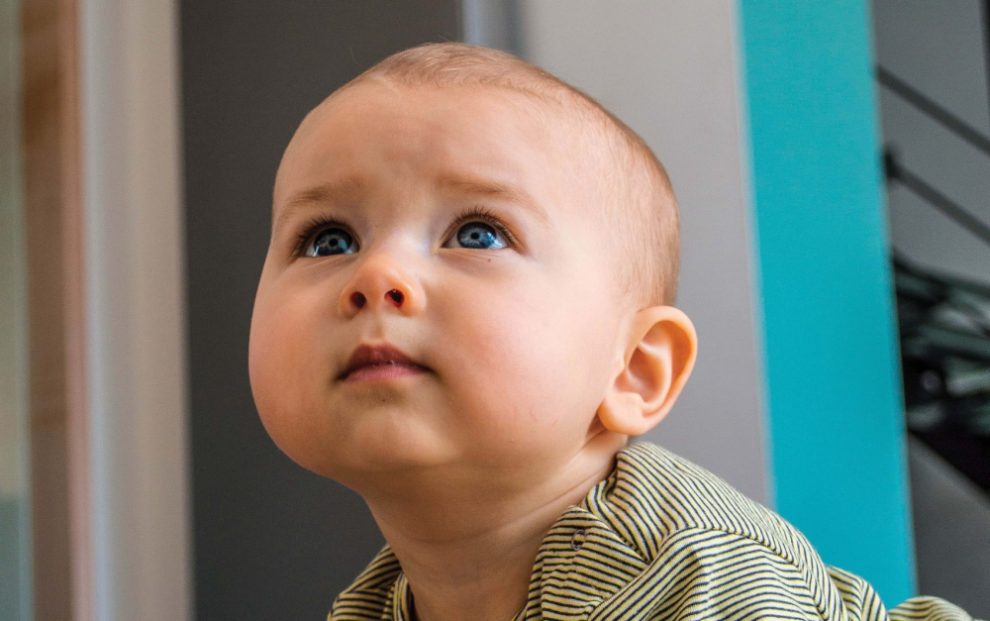 The cliché—though it’s true—is that kids teach their parents far more than their parents teach them. I have found this most often to be the case in perspective building, that is, learning about my own history and experiences by seeing them replayed from one generation removed and by now occupying the other seat in the parent–child dynamic. From this vantage point, simply occupying space in a child’s presence can unlock incredible wonder for an adult.

For instance, spending time with a baby, especially one who is just starting to sit up and explore the surrounding world, lets you see through a child’s eyes just how big everything in the world is. If we dig deep, we can unearth our own recollections of the grandeur of these first encounters with our own world: the stuffed animal as tall as we were; how Dad was a giant whose head towered in the cathedral-like rafters of the family room; the airplane ride at the mall that swept us unthinkably high into the air.

But as we grow up, the transition to adulthood brings with it an unfortunate succession of things in life losing the wonder of their scale: finding the old stuffed animal in the back of a closet and realizing how tiny it really was; realizing the adults in our lives lose their mythic stature as we catch up to them in height. Everything becomes smaller, more finite, worn. As we navigate this process, it’s easy to supplant our earlier perceptions with new information that undercuts it.

We second-guess our younger selves and devalue their judgment. The world wasn’t that magical. It’s subtler than the loss of Santa Claus and the Easter Bunny, but it’s a loss nonetheless.

But that’s not the end of the story. When one eventually transitions to parenthood and has the opportunity to sit with a little one in this new-again world, it can be jarring to realize how right our first impressions really were. The ceilings, doorways, tables, counters, grown-ups—they might be giants after all.

The Monkees’ “Me and Magdalena” was my daughter’s lullaby song for several years of her early life. It includes the line, “Do you see a long-lost father? / Does he hold you with the hands you remember as a child?” If not for that lyric, I would not have registered that my hand really does cover the span of her back. A dad really is that big! A child’s perspective is valid.

Wonder holds an important role in sustaining the life of faith. If we don’t retain a sense of awe before the infinite being who willed all into existence, there’s something fundamentally wrong in that relationship. As a Catholic, I hold on to this sense of wonder, because frankly we aren’t the only ones on our journey who will try to make us question our sense of the world.

How often in church spaces does someone bring a vibrant spirit, full of joyful love for the divine, only to have someone else tell them it’s inadequate or somehow wrong? We all have these stories, whether our own or from friends and family along the way. We also know the cost that these encounters exact. According to the Pew Research Center, some 13 percent of the U.S. adult population is composed of former Catholics. And without fail, that body count includes the real treasures among us—the artists and poets who see the world in a beautiful way. We lose the people who challenge us to see the wonder of things as bigger, and too often we let the most rigid people with the smallest God call the shots and shame the rest of us.

A friend who was easily the most socially conscious person in our high school once persisted in asking hard but earnest questions to the zealous young priest visiting her religion class. He finally said that if she couldn’t just accept the teachings involved with her questions, then she should ask herself whether she was really a Catholic. At that moment, she decided she must not be.

I think with sadness of the story of Audrey Assad, the popular vocalist whose singing tapped many listeners into a deeper sense of the sublime, who announced early last year that she is no longer Catholic or Christian. When she went public, the negative reactions in some Catholic circles ironically underscored the very reasons she left. We couldn’t help but join the chorus of small people who had sought to belittle her and her faith perspective. How tragic that someone with such an expansive and beautiful sense of God’s creative wonder found what the church had to offer was too small for her.

If it isn’t clear, I don’t want my kids to leave the church someday. And with each sacrament and daily casual report on what they learned in religion class, I feel my defenses rising, waiting for the day that my child’s sense of God’s infinite wonder has taken a hit because of someone else’s narrowness.

It saddens me that I spent my formative years progressively ceding my sense of childhood wonder without anyone even prompting me to do so. But thanks to the new perspective afforded to me by my kids, I will do my best not to smother their own sense of marveling at the world around them. It is God’s creation after all, and what a splendid way to give back glory to their Creator and learn that God loves them immensely.

Jesus rebukes his disciples and says, “Let the little children come to me, and do not stop them; for it is to such as these that the kingdom of heaven belongs” (Matt. 19:14). We could all benefit from the humility of being helplessly miniscule and totally reliant on the goodness of another. If we become the right kind of small, we can recover a truly epic sense of wonder for the giant one who looms over us but is so often obscured from view.