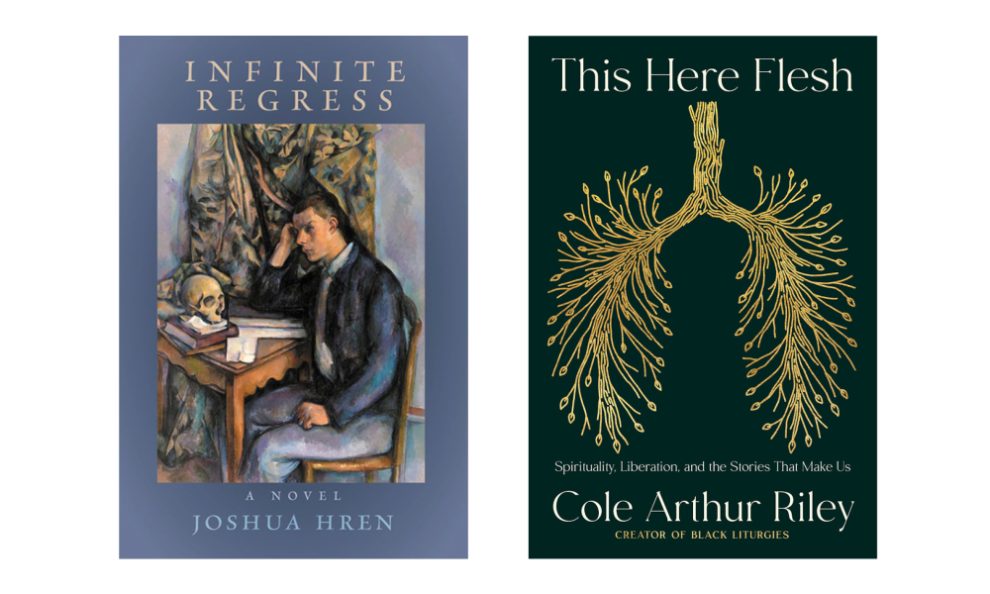 Infinite Regress follows Blake Yourrick, who is rebuilding his life after accumulating a staggering educational debt. The name Yourrick plays on the “poor Yorick” character in Hamlet, but while Shakespeare’s Yorick is remembered as a man of “infinite jest,” Hren’s Yourrick faces more ominous trials. As a graduate of the prestigious St. Marquis University in Milwaukee, Yourrick has fallen under the sway of conniving but captivating defrocked Catholic priest Theo Hape. Taking advantage of Yourrick’s vulnerability, Hape offers to pay off his debts if Yourrick surrenders himself—body and soul—to his former mentor.

Throughout his discourses, Hape seeks to “rehabilitate” Satan, who Hape believes has been wrongly accused. “If we have to prepare for the ascent of Christendom over the world once again, we ought to advance a conception of God that is void of the vindictive, punitive, hell-forging God of the old one,” he says. Hape is also a proponent of “infinite regress,” a philosophical term concerned with cause, effect, and the origins of the universe. By his rationale, it is impossible to prove the existence of a creator, and questions of morality and eternity become fodder for endless speculation.

In his previous work, How to Read (and Write) Like a Catholic (TAN Books), Hren advises, “Given that fiction is largely a record of man in rebellion, a large part of [a Catholic writer’s] work consists of drawing out the spiritual depths of man’s refusal to serve.”
With Infinite Regress, Hren gives us a masterful story highlighting Satan’s non serviam rebellion and an inspiring antidote to the gospel of nihilism.

“I used to think that Christian contemplation was reserved for white men who leave copies of C. S. Lewis’s letters strewn about and know a great deal about coffee and beard oils,” writes Cole Arthur Riley in her new book, This Here Flesh. Instead, through her meditations on scripture, storytelling about her own family, and reflections on her own embodied experience, Riley reclaims contemplative Christianity, finding God in stories, in our own histories, and in our very bodies.

Riley is the creator of Black Liturgies, an Instagram page that shares prayers, poetry, and quotes by Black writers. The page serves as a place for lament, celebration, and prayer for Black Christians and others who have been disenfranchised by the institutional church. With her new book, Riley takes the work she began with Black Liturgies one step further, showing how telling your own story can serve as an act of justice and bring you closer to God.

The short book overflows with powerful reflections about race, justice, theology, and spirituality. It’s the kind of book you don’t read all at once, but a few pages at a time, pausing to sit with what you just read.

One of my favorite images in the book was when Riley talks about liberation not as a place to which we arrive at the end of time, but as a family table—a place to which you can return again and again. The eucharistic image of a noisy, intergenerational table, with everyone coming to their own seats in their own particularity—warts and all—to tell their own story and their own experience is perhaps one that many of us have experienced in our own lives. It is a powerful reminder that God is in the ties that bind us together: that the trinitarian God is present in our relationships with one another and with the rest of material creation.

Breaking Ground: Charting Our Future in a Pandemic Year

This collection of essays written over the last two years documents the intersection of faith, pandemic, racial reckoning, and political polarization.

Smith explores artificial intelligence and robotic technology through a biblical lens, considering the good the Christian community can accomplish with them.

Body Becoming: A Path to Our Liberation

Henderson-Espinoza argues for the importance of being present within one’s body as a starting place for approaching society and religion.