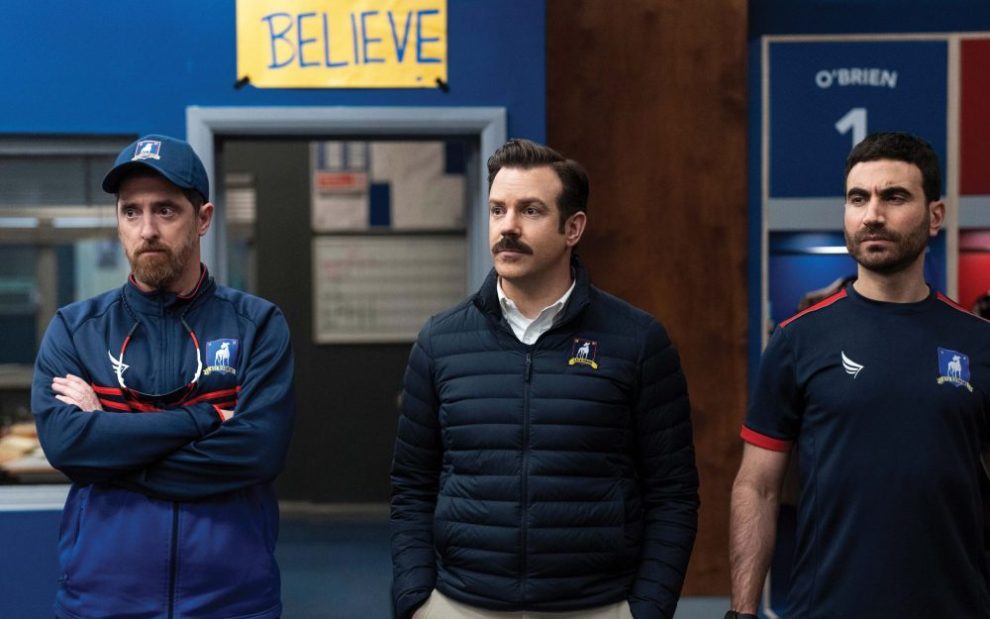 Ted Lasso is teaching boys how to be men and men how to be good people. Right there on television, where the opposite usually happens.

The American series—named for its main character and produced in London for Apple TV+—was nominated for 20 Primetime Emmy Awards its first season alone, scooping up Golden Globe, Critics Choice, and other awards along the way. It was just renewed for a third season.

The premise will feel slightly familiar to fans of the 1989 film Major League: An owner of a United Kingdom soccer club hires American coach Ted Lasso, hoping he’ll be incompetent and drive the team into the ground, thereby really annoying her soccer-loving ex-husband.

Ted (the heroically delightful Jason Sudeikis), a state college football coach from Kansas City, Kansas, arrives in southwest London to somehow lead the AFC Richmond team in a sport he barely understands. Everyone—the team, the fans, his boss, the press—thinks he is an ignorant fool. They are mean to him.

Ted is not mean back.

Ted may not be able to tell a midfield anchor from a sweeper (the offside rule is a consistent bewilderment), but he is relentlessly cheery, confident in his plan, and bravely vulnerable. He’s marvelously, unexpectedly, consummately kind.

We fear for Ted, story line after story line, because he takes on bullies and schemers with nothing but a sunny determination to face life with joy and empathy. Yet slowly, gradually, we watch his sweetness and belief in humanity work their magic on the naysayers.

He treats big shots as regular folks who are going to love his bad jokes and long stories. He stands up to intimidation with truth and good manners.

He contends with an immature, womanizing sports diva not by slamming him into lockers but by strategically using praise and appreciation.

He wins over his cranky boss by baking her shortbread every morning. A hero who copes with a demanding female supervisor by dropping off homemade biscuits at the start of each workday. Imagine.

When sports writer Trent Crimm (the wry and bemused James Lance deserves more lines) shadows Ted for a day, hoping to write an incriminating feature story about the new coach’s ineptitude, all he manages to unearth are examples of Ted’s unflinching decency.

Ted hires a Black female sports psychologist to help the team (and eventually even himself) deal with mental health challenges.

He befriends and uplifts little people who have no power, elevating them and benefiting everyone.

The series is about soccer—sort of—but doesn’t follow the common trope of sports narratives in American media: sad sack underdogs getting coached into becoming heroes and trouncing all other teams in some championship event.

Men must be so grateful to see masculinity represented as something wise, romantic, loving, and thoughtful.

Ted doesn’t often win games. And he doesn’t really care. To Ted, winning is not the point of sports. He celebrates with his team just because they played.

Ted Lasso shows men who are still utterly masculine, even when they wear tiny shorts, fail to win, or have panic attacks. And Ted is not the only character leading the way out of the emotionally addled masculinity of his media ancestors.

An obsequious administrator, a Sphinx-like assistant coach, and an insecure equipment manager form an impromptu support group called the Diamond Dogs, counseling Ted and one another. They are alternately baffled, wise, and delicate as they try to figure out relationships, parenting, and themselves. They call emergency meetings to offer support and guidance in Ted’s office—a remarkable location for interaction between male characters, given television’s and film’s tendencies to always put men in a bar for any conversation.

Aging soccer star Roy Kent (Brett Goldstein’s eyebrows should be considered part of the supporting cast) embodies the media masculinity we all know too well—he’s furious at everything, constantly. Yet he frequently takes his young niece to the park, admires the independence of his businesswoman girlfriend, and visits the Diamond Dogs to talk through how to handle jealousy without punching the other fellow’s lights out.

In a welcome break from the violent, cheating antiheroes of the last two television decades, Ted Lasso covers professional sports without the predictable macho idiocy and dares to bring us male characters who are fully developed human beings—who cry when their partners leave, treasure drawings their kids send, and have the emotional maturity of adults.

Ted Lasso makes grown men cry (my grown men friends tell me). Men must be so grateful to see masculinity represented as something wise, romantic, loving, and thoughtful. I am.

Notably, the Primetime Emmy–winning actress Hannah Waddingham plays club-owning Rebecca with depth, humor, and nuance. Thank you, Ted Lasso, for having a part for a grown woman who is not 25, still sexy, prickly, and complicated.

The series is a skillfully crafted story about masculinity that is—finally, blessedly—compassionate and supportive. Ted may or may not be making his team into better players. But he is making them—and his audiences—better men.