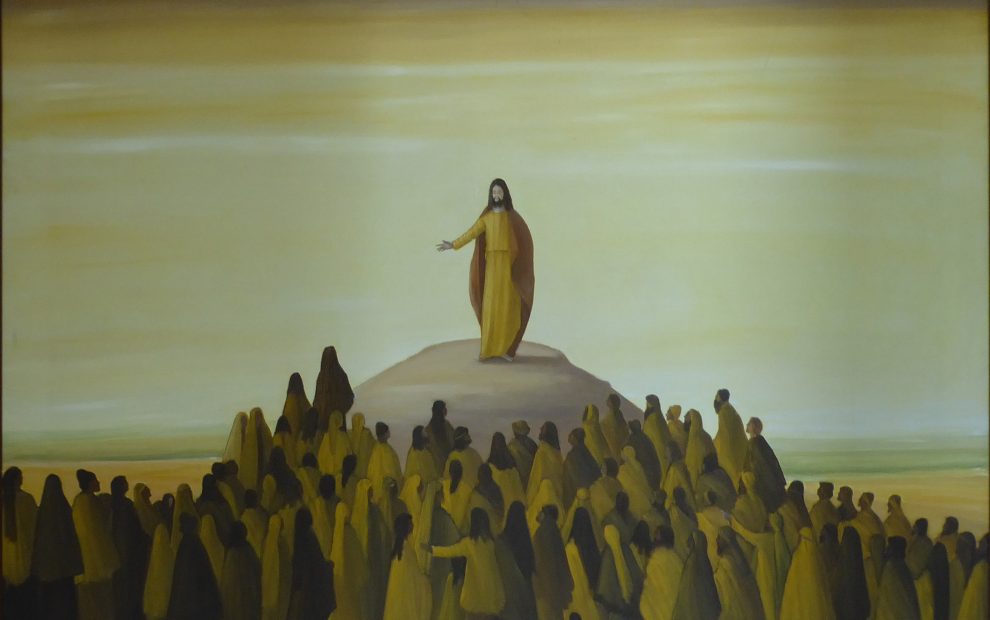 When I entered the office of a dear colleague recently, he had a poster set up on an easel. The school was promoting virtues on homemade posters, rather than the glossy ones sometimes seen in office buildings. His poster highlighted the virtue of humility: “Humility is admiration for the gifts God has given to others, Reverence for God in others, Recognizing and developing our own gifts for others.” I was immediately struck by these words. I think the default when thinking about humility is self-effacing diminishment. Yet the introduction of the word admiration struck a bold path in the other direction. I suddenly started to recognize all the ways in which, being preoccupied with myself, I fail to stop and admire others’ gifts. I am happy to say the poster immediately made me admire my colleague’s gifts!

I’ve thought of that poster many times since, especially when witnessing the pitched battles over so many social issues. When we think about Catholic social teaching, it’s very easy to get drawn into battles over policies, structures, and outcomes. No matter which side we’re on, we’re thinking about getting good things done, and anyone who questions or opposes us can start to look like a barrier to accomplishing something good. We can fall into a form of what Pope Francis calls the “technocratic paradigm,” where we treat others as things, as recalcitrant “parts” of an engine assembly. But society isn’t like a machine. It’s ultimately something we do with other people. Thus, Catholic social teaching isn’t just about policies and plans. It is always also about virtues—the habits we form for interacting with others. We need something like social humility, like what is rooted in the convictions my colleague’s poster expressed.

Three important beliefs are crucial for practicing such social humility. The first is a belief that none of us can see the whole picture. None of us has a true “God’s-eye view” of something as vast and complicated as society. This is a simple fact of human life, but it is especially important for Christians. Wanting to “be like gods” is the primordial sin. It’s especially tempting when we are trying to better society motivated by our religious faith. We can come to believe, too easily, that we are simply doing God’s work, and so our opponents are also God’s opponents. Social humility should remind us that the situation is never that simple. We should seek to admire the piece of the picture that God has gifted the other to see.

The second belief is rooted in traditional Catholic social teaching about conscience—namely, it is virtually impossible to snuff out conscience entirely. No matter how badly formed a person is, there is still a simple underlying inclination: Do what is good. Of course, we can be badly mistaken about what the good is and what means will achieve it. But even if we believe we see the good relatively clearly and accurately, and our opponent does not, we must still believe that our opponent is also seeking the good as they see it. There is something in their view that is good and thus worth admiring.

Third, we believe that God intends the human race to be one family. Notice how dominant family metaphors are when we speak of human relationships in Christianity. We get used to hearing we are “brothers and sisters,” that God is “our father,” and that Mary was called to be “mother” of the “son” who is the “brother” to us all. We don’t take that seriously enough when we go out into society. Our first response to others should be the kind of response we hope for in family relationships—no matter the conflict, the option of total rejection or destruction is off the table. Of course, we are all too aware that family relationships break down. Parents reject children, children reject parents. People become alienated from their own families. But the deep pain of such situations should alert us to the fact that this is not the way things should be. Instead, we should always try to find the good in our brothers and sisters—and not just our biological ones, but everyone in God’s hoped-for human family.

This admiration-first approach is not easy. We need to be aware of the particular “structures of sin” that we face in trying to cultivate this humility. Chief among these is the movement of so much discourse about society into online forums that prioritize a performance of getting attention and rousing followers. It may be easier to realize humility when faced with people in real life, as flesh and blood. Yet real-life social relationships can be plenty infected by pride, hostility, and arrogance.

More importantly, it might be objected: Won’t such humility be taken advantage of? Won’t playing nice and seeking the good intentions of opponents lead us to lose when they do not reciprocate? The painful answer is yes: In this world, that may well be the result. We are always tempted to lay aside the spiritual weapons of the gospel in favor of our own device and use the enemy’s tools and methods. But as we enter into the mystery of Lent and the way of the cross, we must realize that this willingness to “lose” rather than to fight is at the center of how God saves the world. We always hope for better than the cross when we act on and spread the gospel. But we must always recognize and accept that the cross is a possible outcome.

We should seek to admire the piece of the picture that God has gifted the other to see.

We should follow Christ in standing up for truth and dignity, and we should especially minister to those suffering from the blows of those who do not respect others’ dignity. But we must also respect the dignity of and even minister to those on the “other side.” In the Gospel of Luke (14:25–33), Jesus is on his way to Jerusalem, and “large crowds” are following him. He turns to them and tells them about the need to have a plan to finish the building, lest people laugh at a half-finished mess. It’s similar to Matthew’s story that ends the Sermon on the Mount, about building your house on rock, not sand (7:24–27). These are not architectural advice. Rather, they warn people that they need to be “all in” on the mission that heads toward the cross.

Is that path the real foolishness? If we think in terms of maximizing our desired outcomes, it certainly is. But my colleague’s poster reminds us why it is not foolish. It’s a way of entering into conflict that says to the opponent, first and foremost: You are a gifted child of God, and nothing you do or say is going to make me stop trying to connect with that identity. It’s admiring their basic dignity and finding their gifts, no matter what. In doing that, we never truly lose.

Image: Wikimedia Commons/Painting of the Sermon on the Mount, Trentino, Italy