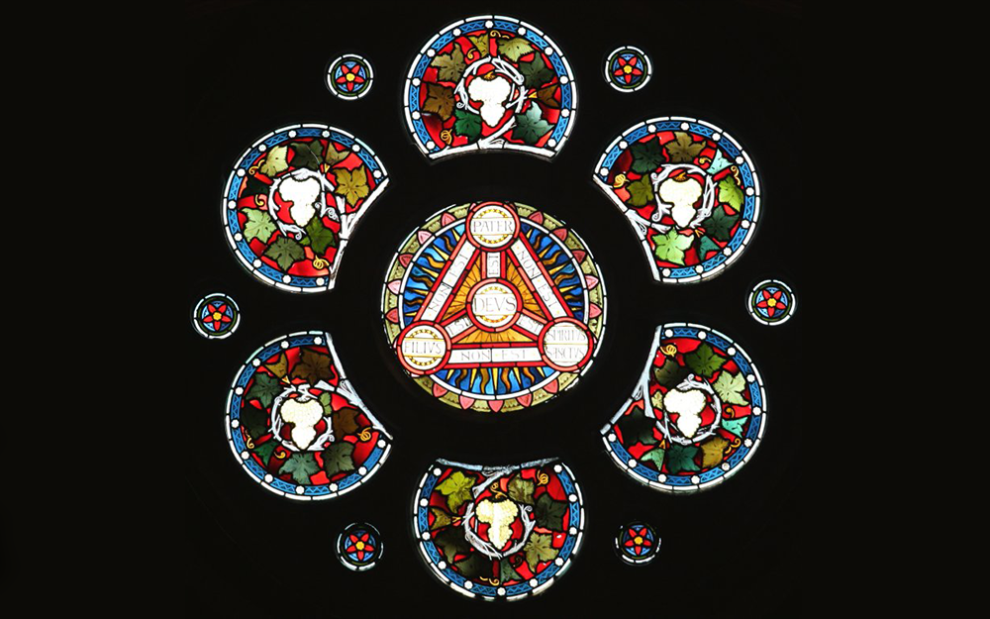 I recently wrote on the various models Pope Francis offers to call us to work toward unity in the church by engaging those we disagree with. If effectively put into practice, Pope Francis’ exhortation enables us to move out of echo chambers and embrace the other with the compassionate, merciful love that the heart of Christ reflects toward all people.

In addition to the Sacred Heart of Jesus, we can turn to the Holy Trinity, God’s community of love, as a model for exiting echo chambers.

However, for many Catholics, the Trinity is such an esoteric concept. While we make the sign of the cross and pronounce the names of the three persons of the Trinity, we often find a chasm between the theological notion of the Trinity and how the trinitarian model applies in our daily lives.

Therefore, my aim is to share insights from Eastern Catholic spirituality, which offers a treasure of resources on trinitarian mysticism and theology, and to bridge these insights with how exiting echo chambers allows us to more fully enter into this community that echoes total and complete love.

Echo chambers keep us insulated, preventing us from imitating the self-gifting action of the Trinity, and can cause us to treat those who do not share our beliefs as our enemies.

However, there is only one echo within the Trinity—one of self-giving love. We are called to receive and reciprocate this echo.

God the Father and God the Son are oriented toward one another in an eternal act of self-gift, offering of Oneself fully to another and reciprocating this self-gift. The reciprocating self-gift between the Father and the Son is the third person of the Trinity, the Holy Spirit. As the Catechism of the Catholic Church puts it, God “is an eternal exchange of love, Father, Son and Holy Spirit, and he has destined us to share in that exchange.”

In his book God’s Community of Love (New City Press), Jesuit Father George Maloney describes the Trinity as the following:

The great revelation Jesus came to give us was to reveal to us that God is an ecstatic, intimate, loving community, a circle of inflaming love that knows no circumference, of a Father emptying himself into his Son through his Spirit of love. Such intimacy and self-emptying are returned by the Son gifting himself back to the Father through the same Spirit.

Related to the gifting of oneself is ekstasis, a notion promulgated by several of the Eastern fathers including Gregory of Nyssa and Maximus the Confessor.

The word ecstasy comes from the Greek word ekstasis (ἔκστασις), which has a much different connotation than the English word. Ekstasis means “to stand outside oneself.” Maloney notes the Trinity exhibits a standing outside of Oneself through an intimate, self-surrendering love and therefore models our call to stand outside ourselves and offer ourselves to God and God’s people.

Therefore, echo chambers are an obstacle to both our relationship with God and our vocation as a Christian to love one another (John 15:12). They must be dismantled so that we can join in God’s community of love.

In addition to ekstasis, the Trinity exemplifies self-emptying, or kenosis (κένωσις). Jesus demonstrates this in becoming human and dying on the cross (see Phil. 2:6–8). The kenosis of Christ manifests the economy of trinitarian love, a self-gift that is self-emptying.

Maloney describes the self-emptying love of the Holy Spirit as the “gift that ‘goes forth’”  from the Father to the Son, “experienced in the kenotic or self-emptying between two persons.”

The Trinity also calls us to self-emptying love toward one another, including those we disagree with. The kenosis therein includes a surrendering of our positions and ideas so that we might see the other and recognize them as a child of God, just as Pope Francis exhorts on the art of accompaniment in the 2013 apostolic exhortation Evangelii Gaudium (The Joy of the Gospel). In doing so, we acknowledge that our beliefs and ideas are not irrefutable idols. Moreover, we are better disposed to participate in true worship of the Trinity by imitating the economy of self-emptying love toward those who are our ideological enemies. This call to surrender requires the gift of humility and the grace of vulnerability.

Self-emptying love does not expect love in return. Just as humans reject the love the Trinity offers them, so too will others reject our self-emptying love, especially those who are at odds with us. The trinitarian model of self-emptying love teaches us that what matters is not being right but instead selflessly offering love to another.

Circle: A symbol of unity

Andrei Rublev’s icon The Trinity is inspired by Abraham’s visitation by three angels (Gen. 18:1–10), which is analogous to the three persons of the Trinity. In the icon, the Trinity sits equidistantly in a circular fashion at a table with a chalice bowl at the center. The circle denotes infinite connectivity and unity without distinct sides. The chalice bowl symbolizes communion and love, as the divine persons experience a communion of unending love rooted in total unity.

Echo chambers, in contrast, promote division and prevent an exchange of love. These exchanges are often vitriolic. Animosity and self-righteousness, not communion of love, are at the center.

No one is more righteous than the Trinity, no “side” is greater than that of the Trinity. The Trinity exhibits righteousness through communion. The only echo is reciprocal love.

If we reconfigure our social media and interpersonal relationships as sitting around a circular table instead of drawing battle lines, we can learn to respect differences and reverence the dignity in the other person. Cultivating this habit can help us learn to see the other and love the other as God does.

We therefore ought to emulate the Trinity’s model of the circle, promoting unity and issuing love not only to those in our immediate “circle.” We must expand our immediate circle to grow more like the infinite trinitarian circle. Following the call of Pope Francis, to pause and engage those who hold positions different than ours, promotes a self-surrendering and self-giving love that invites those with whom we disagree to join us in the circle of trinitarian love.

I referenced in the previous article that when I implemented Pope Francis’ call, a person who was once my ideological enemy online became my friend and brother. Moving away from echo chambers, which stifle our union with the Trinity, offers a positive response to the prayer of Jesus after the Last Supper: that his followers “may all be one. As you, Father, are in me and I am in you, may they also be in us” (John 17:21).

Thus, the measuring stick for our union with the Trinity is directly related to our willingness to work for unity among those in the church who oppose our beliefs and whose beliefs we oppose. When we learn to let go of our attachments to our positions and welcome those with whom we disagree to sit with us at table, whether literally or spiritually, we can more readily enter into the unbroken circle of trinitarian communion and lead others to this precious divine gift expressed in Rublev’s icon.

We can grow in trinitarian communion and demonstrate this toward those who oppose our beliefs (and for whose beliefs we oppose) by accepting the gift from God to participate in the divine nature (2 Pet. 1:4). The Eastern fathers used the term uncreated energies to express the Trinity’s action of communicating love to each of us as a gift of self. In other words, God communicates to us by offering divine uncreated energies.

Archbishop Joseph Raya explains that the divine uncreated energies are not distinct or separate from God. Rather, they are actually God’s self-gift and self-communication to us:

The uncreated energies of God are not “things” which exist outside of God, not “gifts” of God; they are God himself in his action. They are the very God who is himself Uncreated.

When we open ourselves to receive the uncreated energies and allow God to fill us with divine love, which is God gifting the divine nature to us, our eyes begin to see anew—that which we held on to so tightly in terms of our personal beliefs loses importance.

Sequentially, the animosity toward those who oppose our beliefs loses its grip. Our hearts relinquish the attachment to our ideas to become filled with the only matter of importance: being loved by God and loving as God loves.

God’s uncreated energies change our trajectory from self-centeredness to self-emptying, the latter of which leads not to emptiness but the freedom to enter more fully and completely into the divine communion of love. God frees our hearts from the frigidity of polarization, and, like a hearth, God’s love draws us close to those we were at odds with so that we can together form a new community by being in communion with God’s community of love.

By God’s self-gift to us, God can transform our binary, finite positions into a disposition of love, which looks upon the one who thinks differently than we do with curiosity, interest, and openness. God’s uncreated energies can lead us to the freedom to accept that others who have a seemingly opposing stance might have something to teach us. They also lead us not to view them solely from the basis of their ideologies but to see and value them holistically and fully, just as God does.

Let us ask the Trinity for the grace to be delivered from echo chambers, whose walls bind us in fear and limit our ability to receive God’s love and communicate this divine love to others—especially those we oppose in thought, word, and/or deed. As obstacles to loving our neighbor, echo chambers prevent us from growing in holiness and sharing in the divine nature. Rather, God calls us to engage the other and to see the other as God sees them. Additionally, God invites us to receive and imitate the self-giving, self-emptying, ecstatic, and undivided love of the Trinity. We can grow in this activity by allowing God’s uncreated energies to transform us so that instead of echoing our own beliefs and opinions, we echo to each and every person God’s merciful and saving love. By surrendering to this transformation, we join in the Trinity’s echo of divine love.