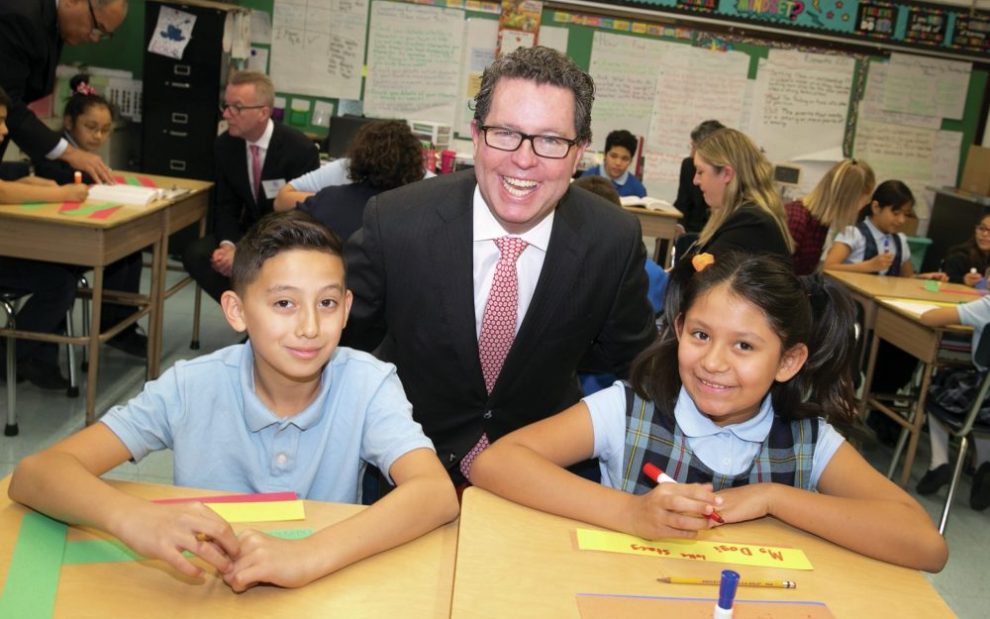 When the COVID-19 pandemic closed school buildings across the country last spring, teachers, families, and students anxiously wondered how they could possibly teach and learn from home. More than that, many low-income students had relied on their schools for meals, support, and other important services. When school buildings closed, some people felt like their whole world was collapsing.

In the midst of such chaos, Josh Hale, president and CEO of Big Shoulders Fund, sprung into action. The Chicago-based nonprofit supports 72 inner-city Catholic schools and more than 20,000 students—80 percent of whom are minorities and 66 percent of whom live in low-income households. Big Shoulders Fund’s mission is to keep Catholic schools open and thriving so they can provide quality values-based education to all students, regardless of their financial situation. When the pandemic hit, its mission became even more critical.

“We really listened to what [the schools’] needs were,” Hale says. “[Big Shoulders Fund] tried to respond to whatever they were looking for.”

Some schools needed Chromebooks. Others needed help setting up meal distribution sites for their families. Others became community support sites, giving away clothing and PPE and eventually administering COVID-19 tests. True to its mission, Big Shoulders Fund helped facilitate it all.

Offering such support during this challenging time was more than just Hale’s 9-to-5 job. It was his faith in action.

Born one of five children to an Irish Catholic family outside Boston, Hale learned from an early age that faith was about more than sitting in the pews on Sundays. His family was steeped in the faith community at Our Lady of La Salette Parish, run by a small missionary order dedicated to social justice.

“[At Our Lady of La Salette], I learned that what we were called to do as Catholics was service and being outward-bound,” he says. “Mass on Sunday was a place to reflect on our actions, but that wasn’t an end unto itself. We were taught, ‘How do you go out and preach without using words?’”

Mass on Sunday was a place to reflect on our actions, but that wasn’t an end unto itself. We were taught, ‘How do you go out and preach without using words?’

Hale attended Catholic schools from elementary through college at Marquette University and participated in service activities in his own neighborhood and abroad. He traveled to Haiti every summer as an adolescent through a mission program run by his mother, during which they would live in community with Haitian boys who would have otherwise lived on the streets. “It had an unbelievable impact on my life,” he says. After college, Hale continued to feel his faith come alive while in service to others during his two years in the Jesuit Volunteer Corps living in the Marshall Islands.

When Hale returned to the United States, he began working with his father as a consultant at The Hale Group in Boston. “I thought that was going to be my life and my career,” he says. After five years, he thought business school would be his next step. Instead, upon urging from a Jesuit friend, he landed in Chicago at Cristo Rey Jesuit High School to work in fundraising and public relations.

Hale thrived at Cristo Rey, which he describes as “probably the best years of my life. I really grew a lot being part of a faith community in action,” he says. But when it was time to move on, he again thought working in business would be his path.

“Once again, thankfully, a higher power took control, and I got introduced to Big Shoulders Fund,” he says, “which was a lucky, lucky day for me.”

In 2005 he started at Big Shoulders Fund as executive director and hasn’t looked back once in the last 16 years. During his tenure, the organization has grown tremendously, at first investing $5 to $7 million a year in inner-city Catholic schools and now investing more than $20 million annually. The money goes to everything from scholarship support for students to operational improvements of school buildings to professional development for teachers and staff. Such investment in students pays off: Alumni of Big Shoulders–funded schools graduate college at two times the national rate overall (three times the national rate for Black students and four times the national rate for Latino students). And on top of that, the alumni are involved citizens, employed, and active in some sort of faith community, all at rates above their peers in national benchmarks.

Faith is a big part of why I’m [at Big Shoulders Fund]. But I hope my actions speak for that.

During the COVID-19 pandemic, Big Shoulders Fund continued to support these schools, albeit in different ways than it ever had before. When a donor reached out looking to help, Hale coordinated meal donations from local restaurants—supporting both families who needed meals and small businesses that were struggling. By the fall, Big Shoulders Fund was able to help schools bring back their students for in-person learning with the appropriate safety precautions in place.

Hale is passionate but humble about his work and quick to lift up the principals and teachers working in the schools day after day. “They are the heroes of it,” he says. “We are the cheerleaders in the back office with the megaphone for what they do on a daily basis.”

What keeps Hale motivated, especially during challenging times like the last year and a half, continues to be his faith, which he is shy to discuss but eager to show through his actions. And although he believed his career would take a different path, he admits he has found the most joy in being part of a mission-driven organization making a real impact in people’s lives.

“Faith is a big, big part of why I’m [at Big Shoulders Fund],” he says. “But I hope that my actions speak for that.”