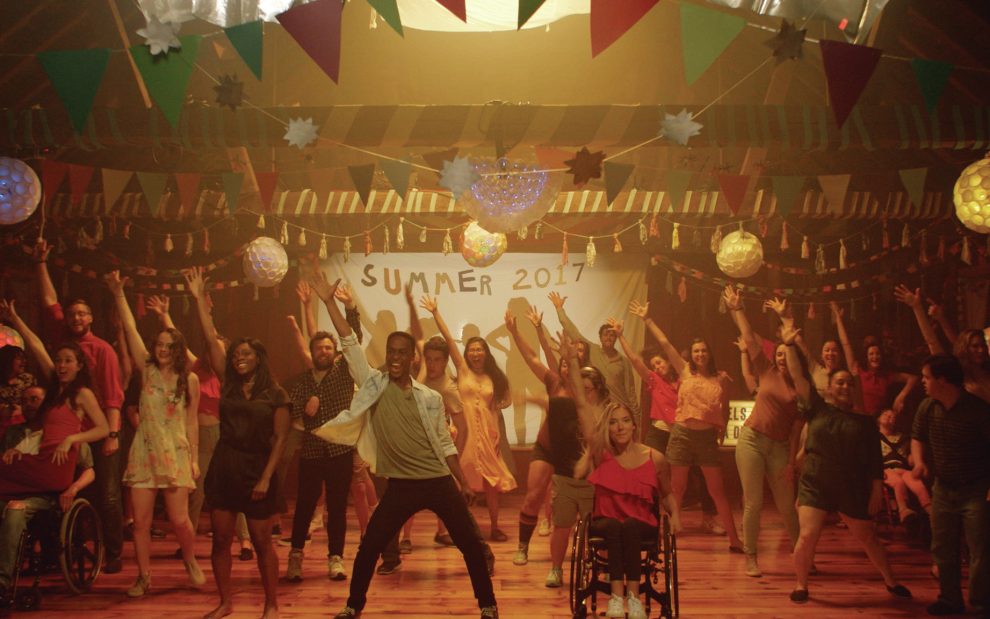 Best Summer Ever (available on Hoopla and to buy or rent on streaming platforms) is a predictable summer film about adolescent yearning and intrigue, an homage to Grease and Footloose. It breaks no original ground in plot or theme and features dancing and acting that, with a few exceptions, gets a bit rustic now and then.

None of that matters in the slightest. It’s a delightful film.

Directors Lauren Smitelli and Michael Parks Randa bring us a cast of actors with Down syndrome, cerebral palsy, spinal muscular atrophy, and developmental disabilities in a film that never once mentions any of them.

Instead, we see kids of all abilities together in high school classes, sports teams, and pep rallies, inhabiting a world more kind than the one in which we live—a better world in which parents know their children will be welcome on the football team or cheerleading squad without comment about what equipment they employ to ambulate down the hall to the lunchroom.

It’s the standard teen film plot: The football star meets a pretty girl over the summer. They part in September, gaze longingly up at the moon for a while, and then, poof! Inexplicably, they find themselves in the same school confronting a mean head cheerleader who wants the football star all to herself. But here’s what’s fresh: Desire, love, joy, and aspiration exist in the lives of people with disabilities, and we get to see it.

Of the original songs composed by Jamie Lawrence, the most rousing are the big song-and-dance productions. Here, the film shines. The opening number at dance camp, where campers include people who don’t walk but nonetheless dance, is explosively joyous, brimming with genuine grins on genuine faces and a happy mix of abled, disabled, straight, queer, and everything-else folks. The choreography is not executed with Broadway perfection, and that’s just fine. The celebration on the field after the concluding football game (of course the film ends with the big game) includes the cast plus moms, dads, and people who look like everyone you know who isn’t a Hollywood star. They all dance—sometimes awkwardly—on the turf in merry exultation. It really is merry. It really is exultant. This looks like it was a fun film to make.

As heroine, Sage (played by comedian, singer, and actress Shannon DeVido) has a powerful solo in which she plays piano and sings poignantly about (what else?) longing for teenage love. DeVido being who she is (as well as being twice the age of a high schooler) has more emotional depth to plumb than do most 17-year-olds. She knocks it out of the park.

Humanity encompasses variety. So should media.

Rickey Alexander Wilson plays Tony, a football star who dreams of being a dancer. Wilson isn’t much of one, but we root for him anyway. He’s a handsome romantic lead. Disability activist Lawrence Carter-Long executes a charming turn as a small-town cop investigating Sage’s mothers’ marijuana crop. He’s wry, funny, and interesting to watch.

Young Eric Folan and Phil Lussier don suitcoats and sit atop the football field in the broadcast booth running commentary on the team. They are a hoot to watch work together, as are Maggie Gyllenhaal and Peter Sarsgaard, who cameo as a TV reporter and cameraman, respectively.

This film doesn’t tell stories about disabilities; it tells stories about being a teenager. Disabled and abled characters mix without discussing difference, as if they are comfortable with and not threatened by one another. It’s wonderful.

A few quibbles with an otherwise family-friendly film: The mean cheerleader, marvelously played by the multitalented MuMu, flips people the bird, swears, and once prays to a dark goddess of destruction. A brief obscene drawing is just as jarring. And then there’s the issue of Sage’s two moms running a pot-selling business out of their aging van. The plot needed a secret for Sage to protect, but couldn’t it have been something other than drug lords in the family? These things might work well in other films, but in this one they feel dropped in from some other script.

Best Summer Ever is revolutionary filmmaking, not because of a riveting plot or nuanced acting, but because it throws down a significant challenge to Hollywood.

At the football field dance party, the camera turns away from the actors and shows us the crew behind the scenes. Many are people with disabilities too. This reveal is an important—and emotional— moment. It is just as critical to disrupt the able-bodied white male stranglehold on who gets to make films as it is to promote diversity in front of the camera.

Best Summer Ever is revolutionary filmmaking, not because of a riveting plot or nuanced acting, but because it throws down a significant challenge to Hollywood. Stop making films about disabilities and just start making films with and about people of all abilities—because humans are made that way.