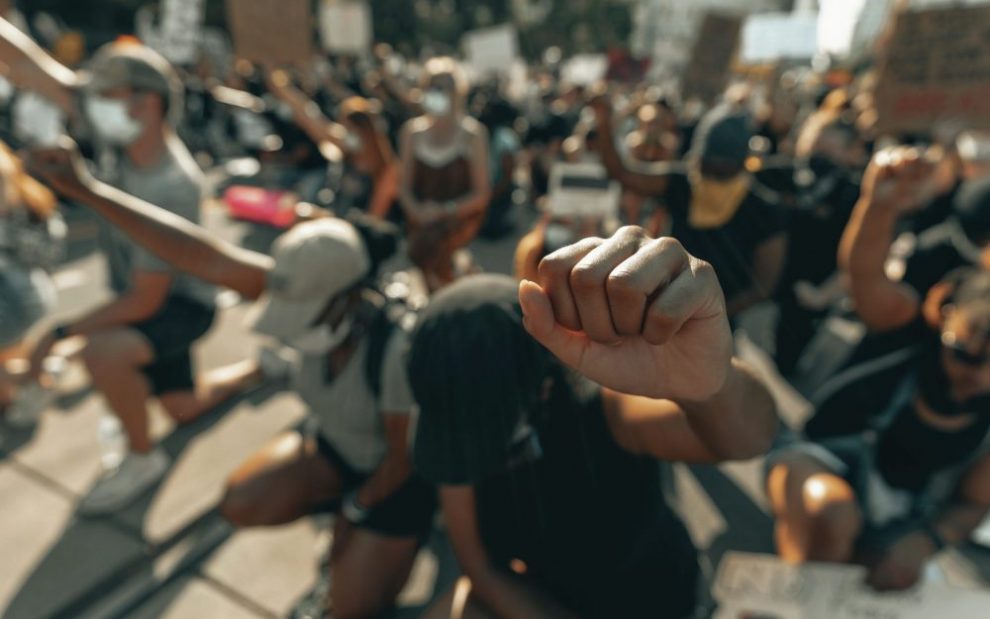 “Why are people so mean?” asked my friend’s first grader last summer as we tried to explain what happened to George Floyd. As my friend’s children learned the names George Floyd and Breonna Taylor, we had meaningful conversations about Black Lives Matter, discrimination, and why, despite the pandemic, it was important to mask up and show up. It was a privilege to accompany them to their first protest. Solidarity, social justice, and moral courage must be taught, modeled, and practiced.

But new efforts to criminalize and discourage peaceful protest are sweeping across the United States. These laws threaten a bedrock of our democracy: They jeopardize our First Amendment rights to freely assemble and speak. For those familiar with Catholic social teaching, these efforts are a significant threat to the common good.

Viewing Jesus through the lens of privilege often leads people to miss the radical call of the good news.

As Christians, we are called to work for the common good of each and of all. No one can be excluded or sacrificed. We are called to solidarity with our local community and to the one human family.

But as Pope Francis notes in Let Us Dream (Simon & Schuster), “A Christian will love and serve her country with patriotic feeling but cannot be merely a nationalist.” Solidarity does not exclude opposition—it mandates it. Opposition to injustice is a form of participation in the common good. St. Pope John Paul II recognized that those protesting in opposition to injustice “are searching for participation and such a definition of the common good that would permit them to participate more fully and effectively in the community.”

Nonviolent resistance is a powerful inbreaking of the good news, but it is important to remember that often those in power use a vision of peace filtered through privilege to undercut justice movements. The selective invocation of Martin Luther King Jr. and the civil rights movement is one key example. “Dr. King would never advocate breaking the law,” an older man once shouted at me as I spoke about civil disobedience at a parish talk.

But I remember, growing up, how my grandparents would tell stories about marching for civil rights and against the Vietnam War. Chastised by teachers in middle school for wearing peace buttons on his jacket, my father continued to do so. Injustice was something to be discussed at the family dinner table and resisted in public. Protest is not merely about justice; it is an act of faith. Through protesting injustice, one publicly witnesses to the gospel.

Jesus rejected sinful structures of exclusion in ways that provoked and made people deeply uncomfortable.

Public rallies and marches are often loud and disruptive. Even when they are silent, they are still destabilizing. There is no comfortable protest. Interrupting injustice requires this kind of disruption. The stability of inequality and injustice lessens the dignity of all of us. “God is paralyzed when we fail to honor the imago Dei in the other as a human being,” notes Sister Anne Arabome, reflecting on the ways “individuals and structures of society conspire to violate and distort the imago Dei.”

In a theology course I teach, my students and I examine the story of Jesus tossing the money changers out of the Temple. It invites a nuanced and provocative conversation about violence, property, anger, and refusal to accept the status quo. I ask students to evaluate whether Jesus is being violent when he tosses over the tables and chases people out of the courtyard. They have a deep unconscious inclination to simply filter the story through “but it’s Jesus” glasses (largely regardless of their religious affiliation). I ask how this story would be interpreted if Jesus were a Black man in America. What if it were Mary Magdalene instead of Jesus? Almost universally, students immediately note that the Black man would be met with physical violence and Mary Magdalene dismissed as a “hysterical” woman.

Viewing Jesus through the lens of privilege often leads people to miss the radical call of the good news. As Jewish New Testament scholar Amy-Jill Levine says, parables exist “to comfort the afflicted and afflict the comfortable.”

Jesus rejected sinful structures of exclusion in ways that provoked and made people deeply uncomfortable. Protest is not about making the privileged comfortable but about destabilizing and dismantling injustice. It is not only required for a healthy democracy—it is a part of discipleship. Ongoing protest for racial justice is participation in the common good and the inbreaking of the reign of God.