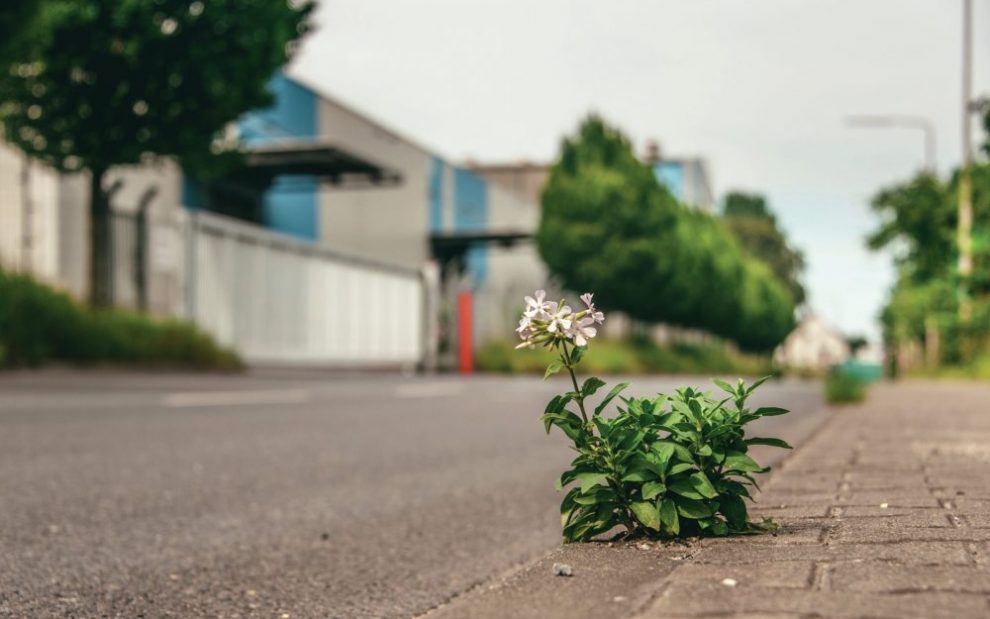 For years I’ve had the word gelassenheit (literally: “serenity”) framed on my wall.

In college, I studied existentialism and phenomenology and came across the writings of Martin Heidegger, who writes about gelassenheit, an image he takes from the writing of Meister Eckhart. Simply put, the term refers to the act of surrendering. For me, the word is a reminder of my journey: where I came from and where I am now.

I grew up in the beautiful neighborhood of Mount Airy, Philadelphia. Our lot was 50 feet by 100 feet. The backyard had three levels. The top had a patio, a swing set, and a place for hanging wash. The second level had four fruit trees: two apple and two peach. The third level opened onto a driveway that bordered the homes on the next street.

In winter our backyard was the gathering place for the neighborhood as we sledded down the levels (we called them “hills”) to the back driveway and crashed into the garage doors of the neighbors. When it was warmer, we played board games in the small log cabin my parents set up in the yard.

As we got older, my brother and I rode our bikes everywhere. I was particularly fond of the section of Fairmount Park that is in Chestnut Hill, a neighborhood near Mount Airy. Walking in those woods, I could forget I was in a major metropolis. I would walk along the Wissahickon Creek, climb trails, and find a clearing to sit and read one of my books. I loved the way the sunbeams came through the leaves and warmed me with their rays.

Later, when I went to the college seminary of St. Charles Borromeo, with its expansive lawn on three sides, drives lined with trees, and a well-stocked library, I was in heaven. Behind the upper­side, or Theologate, was the woods. There I could find trails and a small pond with a clearing above. On winter evenings while it was snowing, I would walk trails beside the pond, and watch the snowflakes slowly fall in the pond or on the trail. This was a time to be silent and listen. A time to pray in wonder.

In my mind, as for Heidegger, those forest clearings represented gelassenheit: a yielding to what is, a surrendering or openness to God. For me, those woods and forest lands physically demonstrated the spiritual path I was on.

So, when I was assigned as a deacon to the inner city, I panicked. “Where are the trees? Where’s the grass? Where’s nature?” All I saw was tarmac, pavement, and brick. I was devastated: This was so unlike any place I lived previously.

Gradually I began to see that nature still surrounded me. I saw grass growing through the cracks in the pavement.

But the people welcomed me. The kids invited me to the school and the skating rink. The elderly people welcomed me into their homes where I ministered the Eucharist. Gradually I began to relax. Gradually I began to see that nature still surrounded me. I saw grass growing through the cracks in the pavement. I saw flower boxes outside windows. I even spotted trees growing in alleys.

I saw a toughness that defined gelassenheit for the inner city, that broke through the forces that would try to stop their growth. It was an act of enabling growth to happen and becoming what God desired.

My early experiences of woods and forest lands resonated with my growing spirituality to surrender to the Spirit, to open myself to God and accept how I was being formed in the Light. My experience of the inner city taught me to not be passive in the process but to participate fully as the Father’s child in my journey of faith.

Father Tom McGann, C.M.F., was ordained in 1976 for the Archdiocese of Philadelphia. In 1998 he received permission to join the Claretian Missionaries in Chicago. In 2001 he was assigned to the Archdiocese of Kingston, Jamaica and stayed there until 2005.