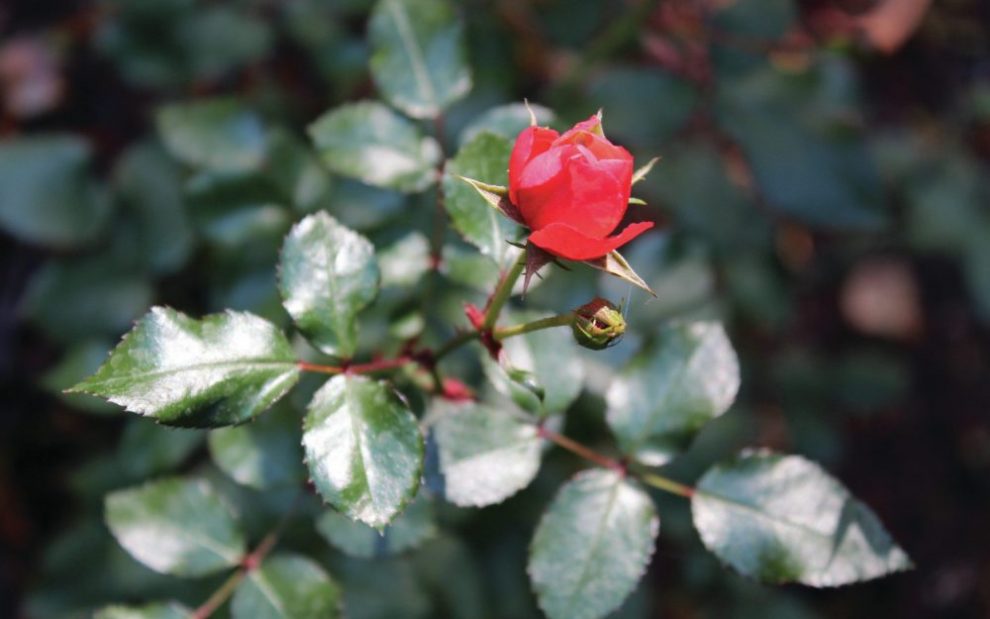 If I give you a rose, you will not doubt God.

A decade before he died, in my front yard my dad and I planted one deep red tea rose. I haven’t tended it as well as he would have in his prime, but it has survived and graced the block with three blossom spurts each year: mid-May, early August, and early October.

In its autumn cycle, it supported one full bloom, facing east, toward the Pentagon or Jerusalem, depending on your view of the world. But the next morning the flower was gone, clipped, not a red petal left behind in the dirt or surrounding grass.

My neighbor and I surmise it was plucked by a passerby in the night. Yes, stolen. At age 30, I would have fussed at the thief. Even now, if this had been the first May blossom, I would have been irritated.

But with the equinox past and days growing short, I didn’t much mind. I assume someone needed it more than I.

In my early 40s, before I could envision my mother bedridden and my father lost on the roads of New York’s Southern Tier—say nothing of silent in their graves—I attended a younger friend’s small at-home wedding reception. In lieu of throwing her well-wishing bouquet, the bride pulled two or three roses out of the table vase, looked around the room, and with a hug handed one to each of the few unmarried female guests. I waited for my rose until it was obvious that I wasn’t going to get one.

She thinks I’m too old. Or . . .? I couldn’t think of another or. I grew agitated, reminiscent of the night when I was 5 and my family insisted that I was sleepwalking. I was not.

I thought of taking matters into my own hands, moseying up to the table and surreptitiously slipping a tulip-shaped bloom into my purse. No. It felt like a thou-shalt-not violation calling for confession. I couldn’t steal a rose. I needed permission or collusion.

So I sidled up to another guest, a few years older than I. “Don’t bring the bride into this and make her feel guilty, but . . .” I looked her straight in the eye, listen to me, listen. “When I leave later tonight, I need a rose in my hand.”

With her help, I brought one home, preserved it dry. The color of pickled beets, it was the first of dozens of roses I’ve gathered in before the killing frost.

“When I leave later tonight, I need a rose in my hand.”

Some have been found. The October after Mother died, I discovered two dozen, count them, 24, on the top of a trash can at the end of the street. White and pink. Still fresh and fragrant, neither tightly closed nor fully open. Still protected in a vendor’s cellophane. Amazed, grateful, and curious—a rose receiver angry with a rose giver?—I brought them home and gave half of each color to my neighbor.

Some have been, uh, stolen. After Dad died I let down my guard and went through a phase of impulsively slipping or snipping roses without permission. None that would be missed. One bent over and dragging in the garden dirt at the National Cathedral. One from a wedding reception winding down. Another from a lavish funeral bouquet left at the church. I hid each in my deep purse and hoped it would perk up when watered in a bud vase in my dining room.

I think I’ve gotten beyond that stage, pinching public roses because I need their promise, though I did recently steal just one more, the afternoon of a predicted frost, on my dad’s birthday. Needing to get out of the house, I took a few hours off and drove to a county park that features an extensive rose garden. To read a book a friend had liked and lent about making order of chaos, I set myself up in a lawn chair on a strip of grass between two rows of deep reds. I’d been there an hour when two middle-aged daughters walked past, speaking Spanish to an older woman, presumably their mother, in a wheelchair.

When they stopped near me to inhale the wafting fragrance, the older woman reached out to grab a stem. I smiled. “You like roses?” I asked.

I think I’ve gotten beyond that stage, pinching public roses because I need their promise, though I did recently steal just one more, the afternoon of a predicted frost, on my dad’s birthday.

The mother smiled and waved, eager to be friendly though she did not understand my question. The daughter spoke: “She wants to pick one, but I told her it’s not allowed.”

When they left my company, I returned to my book until I got chilled. As I walked toward the car, I saw the three at the south end of the garden, still enjoying the last roses of summer.

I decided to take a final tour up and down the north-side rows. And I found what I was looking for: a perfect small bud, bright yellow, on a short stem. To save it from the coming frost, I snipped and slipped it into my purse. Not a bountiful gathering in, but a colorful symbol of contentment.

I got to the car and put my lawn chair in the back seat but wasn’t quite ready to drive away. Behind the wheel I sat and continued to read in my solar-heated Chevy, refreshingly womblike and warm, until I saw the two daughters approaching and loading their car, Mother to the front seat, wheelchair to the trunk.

On this, my father’s birthday, I knew what I needed to do. From my purse I picked up the bright flower. I opened the car door, walked toward the strangers, and handed the old woman the rose she’d wished for.

We both were smiling. It wasn’t too late to enjoy.