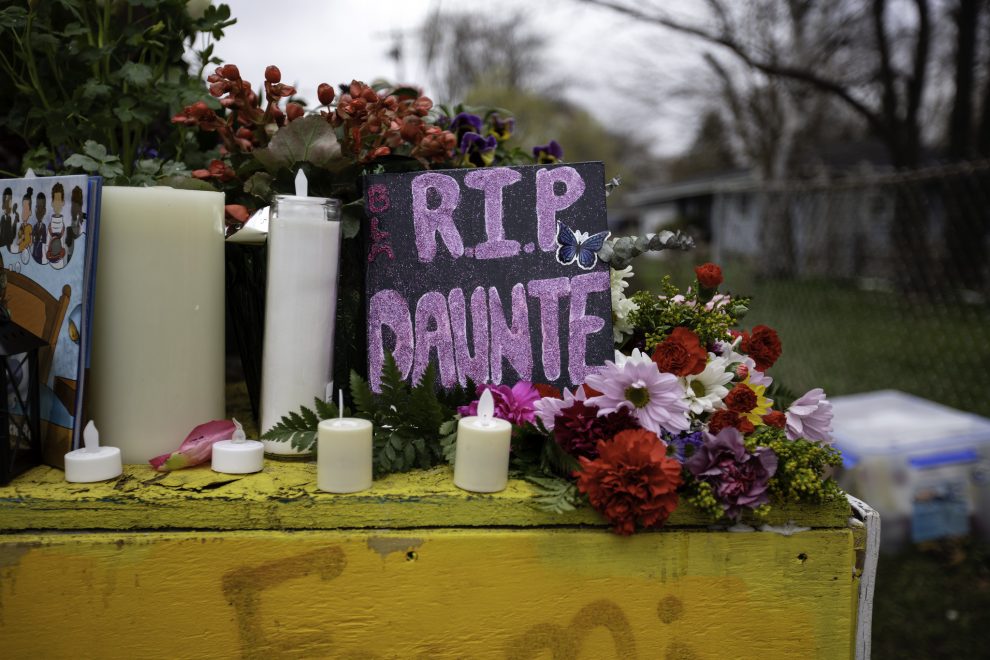 As a Catholic, this year I am not experiencing the joy of the Easter season. Instead, I am in pain. I am sad.

I am retraumatized by the death of Black Americans, senseless deaths that are taking place during this holiest of seasons. As a Black man in America, this is the first time that I have truly felt as if I am walking like the living dead.

A very social creature, I usually want to celebrate the gift of Christ’s love and sacrifice that Easter symbolizes. Yet this year, the pain and sadness of racial violence has taken my joy away. The sin of racism has eclipsed the joy of Easter for those of us in the Black community. I feel saddened, hurt, and enraged by the repeated murders of Black Americans.

I recently FaceTimed with a friend from Minneapolis for nearly three hours. She was distraught, crying nonstop for more than 45 minutes. Finally, when she was able to verbalize her distress, she broke my heart as well: She suggested that I might personally know Daunte Wright, one of the latest Black men to be fatally, nonsensically gunned down by the police.

Just as Peter denied that he knew Jesus, I insisted that I did not, could not know this dutiful son, this adoring father of a young child, this 20-year-old whom former Officer Kim Potter shot and killed after a routine traffic stop.

“No,” I repeated over and over, amidst my friend’s protests. I did not know the man.

But then, I realized that she was right: I do have a connection to Wright. Not so long ago, his sister was an AP Spanish student of mine in Minneapolis. I remember her well: She was a smart, attentive young student. My friend is a former volunteer at the same school who also works with Wright’s sister.

This one degree of separation added to my sadness and inflamed my rage. I quickly moved from anger to devastation. This latest example of violence toward Black Americans hits too close to home for me.

Upon reflection, I realized that my denial that I knew Daunte Wright stemmed from two things. First, I didn’t recall meeting him or anyone close to him—a memory that is partially flawed. Second, and more profoundly, I didn’t want to claim knowledge of Wright, as that would add more pain and suffering to the devastation I was already enduring.

As soon as I realized the connection to Wright’s sister, I came to the realization that racism in America is just like the coronavirus: At some point, it will affect you or someone close to you.

While you are reading this piece, someone you know or someone who knows someone you know is suffering some kind of racial injustice in America. It is not a matter of if but when you will hear that someone who is in some way connected to you has died because of the systemic racism that is deeply ingrained in the American DNA.

Today, none of us can avoid the ravages of racism, none of us can pretend or protest that it doesn’t exist in the United States. We are all victims of it, whether it affects us directly or indirectly. Whether Black, brown, yellow, or white, we will all pay the price for irresponsibility. We will all pay the price for inconsistency and lack of memory.

My friend in Minneapolis is a white woman, married with two white children. She is upper-middle class and volunteers in a Catholic high school. I am a Black man, a religious who has taken vows of poverty, chastity and obedience. I teach the psychology of race and racism at a university in Omaha and also work as a psychotherapist. We live hundreds of miles apart and have not seen each other for over two years. Our lives look very different and yet today we are both suffering the same pain: the loss of a former student’s brother.

Today, I have come to the realization that in the United Sates, Black skin not only dictates your racial identity but also defines and embodies your home. If you are Black, your color travels with you wherever you go; it is not simply a trait that you possess. Black is something I engage with, it gives me direction and orients me every day. This is a place I go to. And now, Black has become the place that buried me alive, even during Easter.

Given the many incidences of police violence against Blacks, I have begun to suspect that all white officers are afraid of Black skin. These officers identify Black skin as a danger that they must protect themselves from: They stand ready to shoot or taze suspects proactively, instead of reactively or when their lives are actually at stake. Thus, to be Black in America means living with a constant fear of being killed, even by those who are theoretically tasked with the job of protecting us.

This Easter season, an inextinguishable rage is dwelling in me. I humbly and honestly admit that I cannot feel the joy that Easter promises. I cannot pretend to be happy while my brothers and sisters are being slaughtered. I pray to become comfortable with my pain. I sit with that pain now, waiting to see what will happen next and how I will respond.

I am struggling to understand and feel the joy of Easter when the brother of my former student has died in the hands of a white officer, simply for the crime of having Black skin. I can’t stop thinking about the many Black Americans who are victims of systemic racism.

In January 2015, the Washington Post established a database of all known deadly shootings by police in the United States. They found that every year, police shoot and kill nearly 1,000 people, and a disproportionate amount of those are Black Americans. According to the study, although Blacks comprise about 13 percent of the population, they are killed by police at double the rate of whites in America. The most devastating statistic: Forty percent of Black people killed by police were unarmed.

This Easter season, an inextinguishable rage is dwelling in me.

Racism is a virus spreading through our nation’s blood, and we seem incapable of stopping it. Have we learned nothing from the police brutality that killed George Floyd, Breonna Taylor, Ahmaud Arbery and countless others? Have we already forgotten that last December, a police officer mistreated Lt. Caron Nazario, a serviceman dressed in his Army uniform? Is our nation’s collective lack of memory larger than its heart? Haven’t we seen and endured enough?

How do you feel watching the video of Adam Toledo, a 13-year-old who got murdered by police in Chicago? Where is our sense of Christian decency when we see this video? What is the role of the Catholic church today in the face of this series of police violence on Black lives? Do police officers really believe they will suffer no consequences for acting with impunity on Black skin? What will it take to finally effect change?

As Americans, and especially as Christians, we must question why being Black has become reason enough for police to shoot to kill. Today, while other Catholics continue to celebrate Easter, the joy of life, we in the Black community are crying over the bodies of our loved ones. Has the killing of Black bodies normalized and desensitized America’s spiritual consciousness?

The time to reimagine policing in America is long overdue. So, too, is the time for Christians to reimagine how to become anti-racist. It is time to take a stronger stand against crime on Black lives. Pope Francis put it right what he said, “Racism is a virus that quickly mutates and, instead of disappearing, goes into hiding, and lurks in waiting.” American Catholics, we have an obligation to act now.

Today, Catholics’ silence regarding the treatment and loss of Black Americans astounds me and seems sinful. I ask myself, do Black lives truly matter for Catholics? James Baldwin said in “The Price of the Ticket” in 1963, “ From my point of view, no label, no slogan, no party, no skin color, and indeed no religion is more important than the human being.” Would today’s Catholic Church agree, even while remaining silent regarding the death of so many Black people?

Today, Catholics’ silence regarding the treatment and loss of Black Americans astounds me and seems sinful. I ask myself, do Black lives truly matter for Catholics?

I am feeling the cumulative effect of the church’s indifference and the lack of response. At the same time, this serves as a leitmotif to light the fire of the Holy Spirit in me. I feel compelled to know Christ more intimately through the pain of my fellow Black Americans. I feel compelled to love Christ more dearly through the trauma of witnessing police violence against Black bodies. I feel motivated to follow Christ more closely as a Black-skinned man dwelling in the land of justice.

The more we deny the existence of racism among us, the more we will die from it. We are invited to pray and engage in uncomfortable conversations about race, recognizing that racism is a sin and exists among us. We are invited to have the courage to engage in conversations that expose the privileges and disadvantages of skin color. We are invited to remember that none of us is immune to the consequences of racism in America. Unless we are willing and open to work towards change, the next victim might be you or me. It is not a matter of who or if, it is a matter of where and when.

I am not celebrating the joy of Easter this year because, like Jesus did on the cross, my people are still going through needless suffering and death. And you?