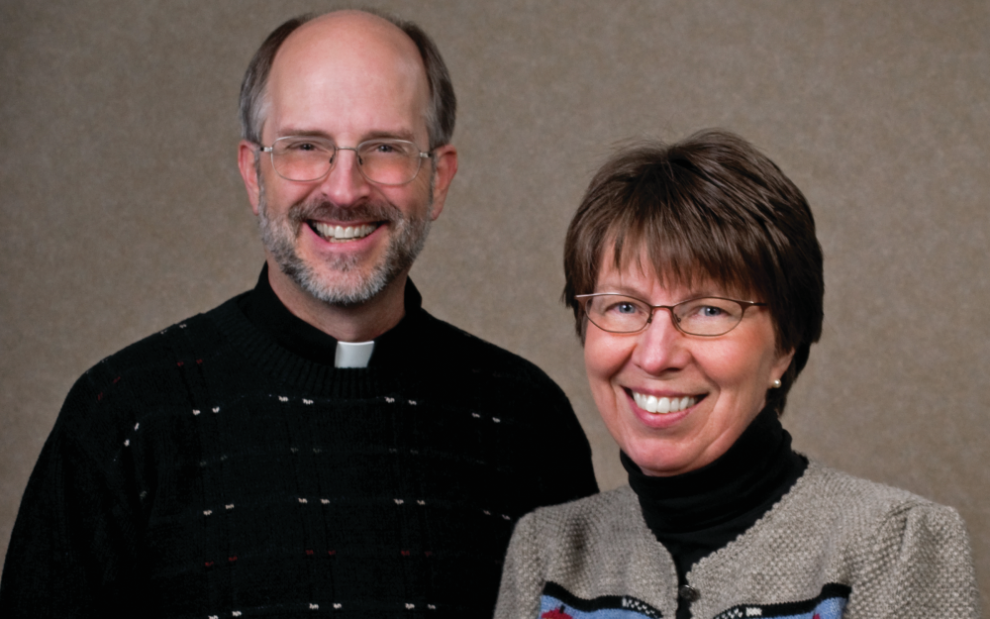 It was the early 2000s. The stories of sexual abuse by the Catholic clergy were making headlines everywhere and over and over again. Horrifying stories of the abuse perpetrated on children by adults they had been taught to trust. It had happened in parishes across the country, and even those who hadn’t personally experienced that sort of trauma were triggered by the news stories.

Sharon Froom, a licensed mental health professional, was witnessing a great deal of emotional turmoil. “I was on contract to do therapy in the Kalamazoo dioceses. Father Ken Schmidt approached me. I said it’s a far more complicated” endeavor to help these individuals, says Froom, whose work doing just that has earned her a finalist position in Catholic Extension’s 2020 Lumen Christi Awards.

Her parish, St. Thomas More Church, was one whose members were deeply impacted by the news. Parishioners sought out their pastor, Schmidt, for help. And while Schmidt acted as a de facto counselor to his flock, he knew Froom could help more. For Froom, the work became “God-driven,” something that “validated” her faith, she says. “It allowed me to see how trauma impacts people, spiritually and physically. I have often thought of the incredible good fortune for my skill set intersecting with that need.”

Together, Froom and Schmidt started an innovative program to treat trauma. It wasn’t just a standard support group. It evolved into the Trauma Recovery Program (TRP), and while it began with one parish, it spread to faith communities throughout the diocese. Just as trauma doesn’t discriminate, neither does the program. It’s free to anyone who takes it. Using the Trauma Model developed by Canadian psychiatrist Colin A. Ross, the program helps individuals and groups identify conflicts, calm the body’s stress response, unlearn specific cognitive distortions, develop self-awareness, and regulate feelings related to trauma.

It’s the group component that Froom says is particularly effective. In the safety of a group environment, where the members have similar issues, individuals are often more open to sharing their feelings. “What’s marvelous about meeting in groups is [the participants] benefit each other,” says Froom. “You have the best opportunity to make a breakthrough.” More than 600 individuals in the Kalamazoo diocese alone have completed the program.

While the clergy sex abuse cases are unquestionably linked to traumatic outcomes for victims, there are many examples of traumatic experiences —from neglectful parents to suffering from a terrible disease during childhood—that adversely affect an individual’s emotional and physical well-being.

Just as trauma doesn’t discriminate, neither does the program.

The Trauma Recovery Program is able to treat all of those forms of trauma, says Froom. What is most gratifying to Froom is seeing the transformation of those in the program.

Froom says one of the most striking breakthroughs she’s encountered from the TRP is that of a woman in her late 20s, the eldest of three children. The woman’s mother was severely depressed throughout the survivor’s childhood, spent days in bed, and worked evenings. She was rarely available to her children. The father, an alcoholic and drug user, often left the children home alone when the trauma survivor was as young as 3 years old. Neighbors reported the situation to protective services. The father then took the kids with him and left them in a car for hours while he drank and used drugs with friends. Froom says the survivor’s conclusions from a childhood of suffering were that life is too hard to endure, and she deduced that the only way to survive was to “zone out until my luck changes.”

As an adult, the woman was unemployed and had her two young children removed from her care—children she had placed at risk due to her lack of parenting skills. But she made huge strides after taking the trauma program. By the end of her participation, “she had gained some perspective about severe neglect she experienced as a child. This allowed for her to have some empathy for herself rather than only extreme guilt and shame,” says Froom. The woman also “began to grieve the childhood she never had as well as grieve the loss of her children.”

Froom brought her knowledge of trauma to Africa through a serendipitous meeting with a priest in California. “Sharon had made a presentation in San Diego, where she was introduced to a Rwandan priest, Father Ubald Rugirangoga, who said we must come to Rwanda,” says Schmidt. “When Sharon told me, I laughed. Ten months later, we were in Rwanda, with a fresh French translation of our manual in hand. Later we found out we were expected to pay not only for our own expenses, but for 160 participants’ room, board, and transportation costs for two multiday conferences. Family, friends, and colleagues contributed more than $20,000 to make that trip happen. We agree that the entire experience was ‘God-driven.’ ”

Froom elaborates on the experience of sharing her knowledge of trauma with Rwandans and the immeasurable rewards she gained: “My sense of connection and how it translates cross-culturally makes me feel like I’m a citizen of the world,” she says. And despite cultural differences, trauma is a universal experience that “needs to be addressed in this generation, or it will continue to be passed down,” she says.

Despite cultural differences, trauma is a universal experience that “needs to be addressed in this generation, or it will continue to be passed down.”

During the COVID-19 pandemic, when group meetings were put on hold, Froom and Schmidt created an online Trauma Program. The TRP’s success also led Froom and Schmidt to create Trauma Recovery Associates, a nonprofit that has trained more than 6,000 mental health professionals in 23 states and six countries. Froom is now retired but remains a senior advisor of the board.

Schmidt believes his modest cofounder “achieved her destiny” when she created the Trauma Recovery Program, which is both secular and faith-based. “Sharon’s discipleship to Christ was clearly the foundation of her work, which eventually led to her providing counseling services at her parish pro bono for years before she started the diocesan Trauma Recovery Program,” he says.