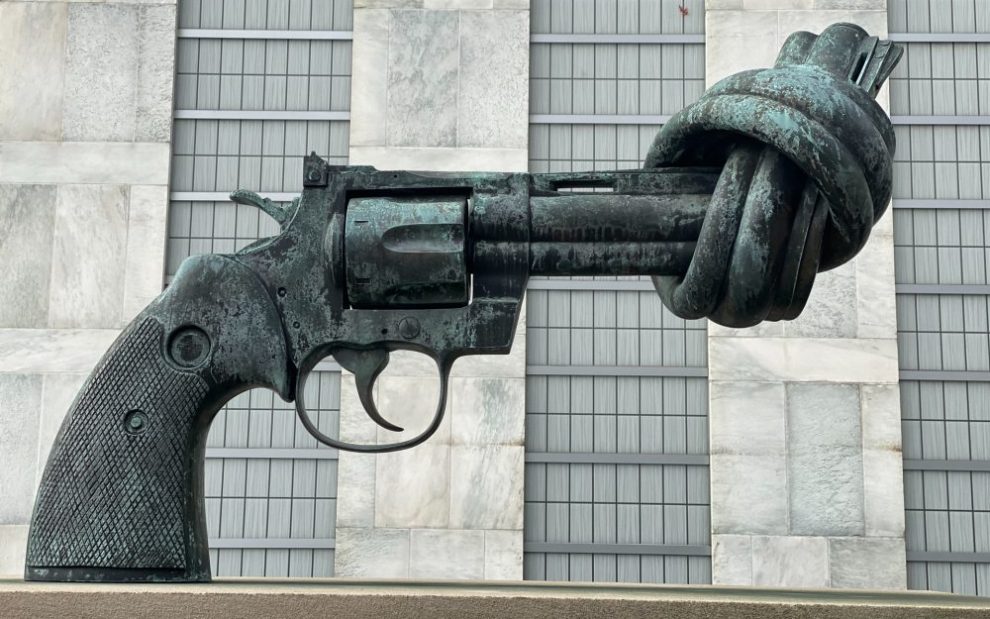 America, we have a gun problem.

Gun violence continues to speak louder than our love for one another. How could we forget the brutal assassinations of Medgar Evers on June 12, 1963; John Fitzgerald Kennedy on November 22, 1963; Malcolm X on February 21, 1965; and Martin Luther King Jr. on April 4, 1968? These leaders are all gone because of gun violence, and yet such murders persist.

We never learn. According to EveryTown Research & Policy, every day in the United States about 100 people are killed through gun violence. As of today, according to the Gun Violence Archive, we have had 104 mass shootings and 4,182 people killed in gun violence in 2021 alone.

As I write this piece, another rogue with an assault weapon is almost certainly planning to take aim at innocent people somewhere in America. By the time you finish reading this piece, do not be surprised if you hear about yet another brutal event. Unless we act now, tomorrow there will be another shooting. You or I—or someone we love—might be the next victims.

All of these individuals were our siblings, fellow members of the body of Christ.

Every person who was gunned down was a child of someone. The victims were parents, spouses, siblings, colleagues, friends. They have left empty places at dinner tables and in beds. They have left behind empty hearts in the people who love them.

America, we have a gun problem. When will we take action?

Today, I am thinking especially of Boulder, where I spent time during the summer of 2017. While I was living in Denver, I always looked forward to the weekends, when I would bike from Denver to Boulder, a small city on the edge of a mountain range. I immediately loved the tight community that makes visitors feel it would only take a day for everyone to learn their name.

As I write this piece, another rogue with an assault weapon is almost certainly planning to take aim at innocent people somewhere in America.

Once I arrived, after my 26-mile ride, I enjoyed sitting down, feeling the wind penetrating my skin and contemplating God as I gazed upon stately trees on the snow-capped mountains. Just thinking about those peaceful moments makes me smile.

I remember considering the way that God controls the wind and balances the temperature; I noticed how the leaves caressed each other and moved in synergistic harmony as an expression of God’s glory. Boulder quickly became my spiritual sanctuary. During my weekend visits, I allowed my imagination to walk with the Divine. Surrounded by the various colors of nature’s bounty, I experienced profound moments with Christ. And on my way in and out of town, I often biked by the King Snoopers store. A simple stop for a cool beverage and quick snack could have led to my death.

This week’s murders brought tears to my eyes—and made me realize how vulnerable we all are to gun violence. No place is safe.

Christian Americans, we have a gun problem. When will we take action to combat it?

Will we consider the killings in Boulder and Atlanta to be opportunities for reckoning, for national healing and reconciliation—or will we wait for another public shooting spree to once again make us mourn and pray? Where is our commitment to protect one another?

But, some say, no one has the right to take away Americans’ constitutional rights—and the right to carry a firearm remains fundamental to American freedom. After all, a legally owned gun can be used for many purposes, including self-defense and hunting for food.

The church is crystal clear on who should carry a gun.

Personally, I enjoy shooting as a sport in a controlled environment. However, the use of a gun against another human, except for self-defense or under extreme circumstances, should not only be strictly prohibited legally, but should be considered a sinful act.

Let’s consider for a moment the ownership of guns for protection. This human right is clearly outlined in the Gospel of Luke, when Jesus tells his disciples, “Let him who has no sword sell his mantle and buy one” (Luke 22:36). The Catechism of the Catholic Church infers that we have the right to use a gun as self-defense when it counsels, “Do not slay the innocent…and the righteous” (C.C.C. 2264-2265). While the catechism does not clearly permit lethal force in self-defense, it suggests that in a situation where a gun is the ultimate recourse, people must protect themselves and others.

Nevertheless, none of us has the right to use guns against our brothers and sisters in any pretext, without provocation, at any point.

This leads to the question, who should have the right to own a gun?

For Catholics in the United States, the topic of gun control is sensitive and fragile territory. And yet the church is crystal clear on who should carry a gun. In 1994, the magisterium of the Catholic Church asked Catholics to consider gun control, and the resulting document, “International Arms Trade: An Ethical Reflection,” makes the church’s stance clear: “It is urgent to find an effective way to stop that flow of arms to terrorist and criminal groups. An indispensable measure would be for each State to impose strict control on the sale of handguns and small arms. Limit the purchase of such arms would certainly not infringe upon the rights of anyone.”

Similarly, the U.S. Conference of Catholic Bishops, in a 2000 document titled “Responsibility, Rehabilitation, and Restoration: A Catholic Perspective on Crime and Criminal Justice,” stated, “All of us must do more to end violence in the home and to find ways to help victims break out of the pattern of abuse. As bishops, we support measures that control the sale and use of firearms and make them safer . . . and we reiterate our call for sensible regulation of handguns.”

These church documents clearly state the church’s position on gun control: They do not suggest the ban of guns but rather advocate for measures to “limit” and “control” their ownership and use. As such, gun control remains a pro-life issue that needs to be addressed by the Catholic Church.

Why is it always victims who have to wait for justice, for healing, and for peace in this country?

U.S. bishops are obligated to engage in a collective conversation with the authorities and to ask them to protect God’s people in the ongoing battle against violence, racism, and misogyny. Our Catholic faith calls us to love and care for everyone. God has given us the ongoing mission to heal ourselves and our society.

Catholic Americans, we have a gun problem. When will we take action?

While I respect their message, I have to wonder when will it be the time? Why is it always victims who have to wait for justice, for healing, and for peace in this country? As James Baldwin once said of the violence spawned by racism:

“What is it you wanted me to reconcile myself to? I was born here, almost 60 years ago. I am not going to live another 60 years. You always told me ‘it takes time.’ It’s taken my father’s time, my mother’s time, my uncle’s time, my brother’s time and my sisters’ time. How much time do you want for your progress?”

Baldwin said these words in the 1980s. If it wasn’t the time then, why can’t it be the time now? Isn’t it time we showed respect for the victims of gun violence?

Now, in beds, at tables, and in the hearts of many, lie voids that hatred and violence created. The countless families and friends of the innocents killed by gunfire remain traumatized. This affects all of us in the United States and will last in our unconscious minds for a long time. If this trauma remains unprocessed or repressed, it will express itself at some point, in some form. Then, we will need to deal with it again.

Thus, we have a human responsibility as moral Christians to act as a Beloved Community, to stand together and not only pray against hate crimes but also advocate against the rampant gun violence in our midst.

If this trauma remains unprocessed or repressed, it will express itself at some point, in some form.

I invite all U.S. Christians to sit down with the names of the recent victims, to pray over them, and to listen to what God is telling us. Let us use our imaginations to consider what we should be feeling, where we should be going, and what God wants us to do in this moment.

Today, this moment, can be a kairos time—a critical opportunity to heal. A time to imagine ourselves as people of God who support the sanctity of life.

Now is the moment to stand as one church for what matters. This is a time to pray as one nation. This is our opportunity to take action as a free nation, to fight for our right and moral obligation to protect and promote the lives of each other.

When will the time come to take action against gun violence? America, the time is now.