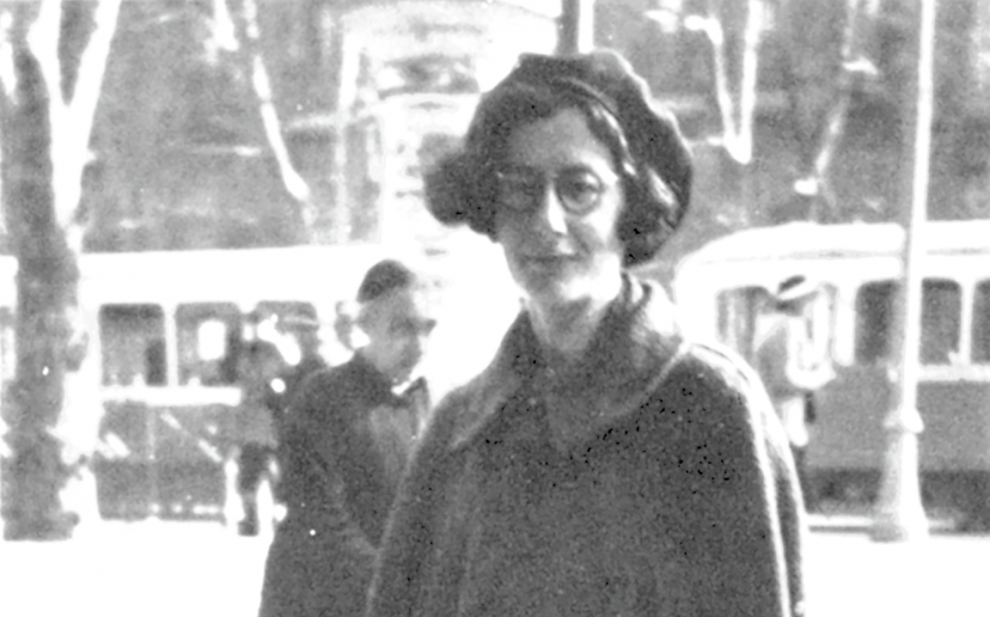 Lucy Maud Montgomerys spunky heroine Anne of Green Gables famously uses the term “kindred spirits” to describe people with whom she quickly senses understanding and connection. Through the years, the designation has come to mind as I’ve met various friends and mentors, both in person and through literature. One individual whom I knew to be a kindred spirit at my moment of first encounter is the French philosopher, mystic, and political activist Simone Weil. I can remember my exact seat in the lecture hall when my divinity school professor introduced Weil to our class. If my first thought was, “Oh, that’s how you pronounce it!” (sounds like “vey” in “convey”), my second was a satisfied “Yes!” The life and ideas of this spiritual seeker, thinker, and writer resonated with me immediately.

Weil was born in Paris in 1909 to respectable parents, and her childhood involved no lack for love or resources. But from an early age (when, at 5, she refused to eat sugar out of solidarity with the French soldiers on the front during World War I), Weil felt out of place in the privileged world provided for her. An absence of understanding formed a gulf between Weil and her family throughout her life.

An intelligent child, Weil advanced quickly through her studies, and in her early 20s she began teaching philosophy at a secondary school for girls. Alongside teaching, Weil supported the unemployed workmen in the town by taking direct action against municipal authorities. She wrote for La Révolution prolétarienne, an exercise that helped her articulate ideas and crystalize her feelings about the conditions of workers.

Inspired by these peripheral projects, Weil took a year’s leave from teaching to experience the working people’s life in the fields and factories, but as she worked, the poor health that would continue throughout her short life plagued her. Weil spent her 20s vacillating between immersion with the poor and retreat (at her parents’ beckoning) to a less arduous way of life, either teaching or recuperating with her family.

During one of her periods of withdrawal, Weil moved to Marseilles, where, in 1941, she met Father Joseph-Marie Perrin, a Dominican priest whose friendship and guidance shaped her spirituality and thinking significantly. From this time until her death, Weil’s mystical tendencies and her preoccupation with the notion of God developed, aided by a mail correspondence with Perrin after she moved to New York and then to her final home in England.

Continued commitment to solidarity with the poor—specifically, eating only the rations to which her compatriots in the occupied zone were limited—took its toll on the already sickly and exhausted Weil, and she died in a sanatorium in August 1943.

Weil’s position as an outsider doesn’t hinder her prayer life in the slightest.

Although Weil’s resistance work and commitment to justice during her short life were remarkable, it could be said that her greatest contributions to the human family came after her death: The rich interior life that remained largely hidden during her 34 years on Earth revealed itself through posthumously published essays and letters.

For instance, for anyone who has ever felt unsure about their feelings for the institutional church, Weil’s complicated relationship with Catholicism and her refusal of baptism will resonate. Her reasoning, expressed through several letters to Perrin, is thoughtful and detailed, both political and personal. In line with the rest of her life, Weil possessed an extreme commitment to solidarity and was determined to remain with those on the outside of the church.

The church’s social structure also discouraged Weil from formally joining it, as she learned about saints who, “blinded by something very powerful,” approved of the Crusades or the Inquisition. With disarming self-awareness, Weil writes, “My natural disposition is to be very easily influenced, too much influenced, and above all by anything collective. . . . That is a very great weakness, but that is how I am.” Out of concern for being swept up in the communal thinking and feeling of the church, she resisted formally attaching herself to it.

But the reason for Weil’s refusal of baptism that most stands out to me is perhaps the simplest: She didn’t love the church. “I love God, Christ, and the Catholic faith,” Weil writes. “I love the saints through their writings. . . . I love the six or seven Catholics of genuine spirituality whom chance has led me to meet in the course of my life. I love the Catholic liturgy, hymns, architecture, rites, and ceremonies. But I have not the slightest love for the Church in the strict sense of the word, apart from its relation to all these things that I do love.”

Christ himself came down and took possession of me.

Weil found comfort living in a gray area, one where she could appreciate and learn from a tradition without formally attaching herself to it or getting caught up in the semantics of salvation. This encourages me, someone who remains on the inside of the tradition out of love for aspects of it (the very ones that Weil mentions) but experiences frequent discomfort with and disapproval of “the church” itself. Weil reminds me that these diametrical feelings can exist within one person at one moment.

Indeed, Weil’s position as an outsider doesn’t hinder her prayer life in the slightest. She, quite plainly, was an unintended mystic. At a time when she wouldn’t have even identified her actions as prayer, she recalls that “Christ himself came down and took possession of me.” No one could have been more surprised by this experience than Weil herself. “In my arguments about the insolubility of the problem of God,” she writes to Perrin, “I had never foreseen the possibility of that, of a real contact, person to person, here below, between a human being and God.”

There’s a sense that Weil has no control over her mystical experiences—Christ’s possession of her is grace—but also that Weil did what she could—the recitation of poems and prayers, the cultivation of attention in all facets of life—to open herself to God’s movement within her. This, to me, is such a valuable insight into the nature of prayer. The message weaves its way throughout Weil’s work: God’s presence does not depend on our human actions, but our behaviors can create pathways for connection and can prepare us to receive God’s transformative presence.

Weil is a kindred spirit to anyone who embraces the complexity of life on the periphery.

In a way, the dichotomy that encapsulates Weil’s approach to prayer reflects her entire life: Public and private, privileged and poor, profound and practical, Weil defies expectation and compartmentalization. With utter frankness and humility, she positions herself between the inside and the outside. She surprises herself as much as she does us with her unfolding spirituality, her clarity regarding organized religion, and her union with God. At once lofty and down to earth, a (non-official) convert and critic, Weil is a kindred spirit to anyone who embraces the complexity of life on the periphery and receptiveness to the ever evolving mystery of faith.