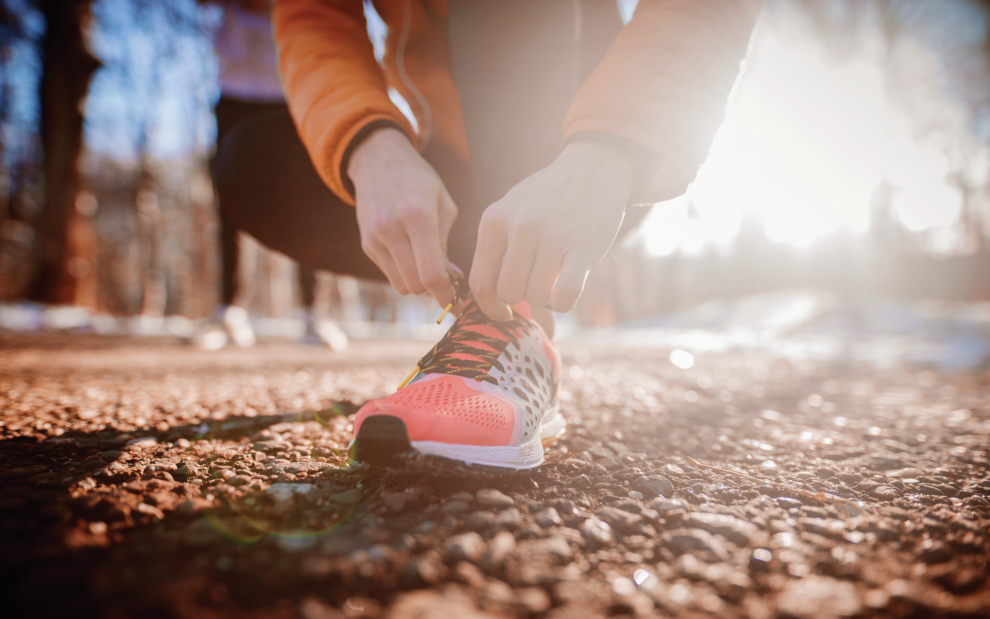 There are plenty of things in this life that I am not known for—two of those being crying and running. Yet there I was on my third lap, tears melting down my cheeks for no apparent reason, and it felt great.

We instituted backyard laps for our kids every evening last spring when schools were closed. Sleep issues, anxiety, and confinement were wearing on everyone in our house. We played outside every day and got on an e-learning routine, but our children just weren’t ever hitting that mental and physical exhaustion (and easy bedtime) that came with a full day of school. So we made them run laps, and occasionally we ran with them.

Let’s be clear: I could hike all day for a sunset view, but I am not a runner. I powered through a few laps in the backyard for a week to set an example for my kids before I curiously realized I looked forward to them each day. I even went rogue and ran by myself one afternoon. That’s when the crying incident happened. On my third lap in a wooded section of our lot, I realized I was sobbing. It was April. We were in quarantine. I had just turned 40. The only grandma I had left had just passed away. That run somehow released all the stress and pressure I didn’t even know I was holding inside.

I let my emotions flow out of me, and I kept up the running after that day. It has become an important time for me to decompress, check in on myself, and examine my faith. Some days I run with my kids, and other days I sneak out and run on my own. Both are helpful in different ways, so I became curious about the benefits of running, for myself and for my family.

My friend Stephanie has two kids and started running on a dare more than 10 years ago. She has since completed 16 marathons. She tells me running keeps her in balance. “It is my me time, my stress release, and my emotional release,” she says.

Stephanie’s mom was diagnosed with dementia in 2017, and it rattled her Catholic faith. “I was angry,” says Stephanie. She took that anger and put it into training for the Carmel Marathon in Indiana, which she does every year. She says she will never forget the lady in bright purple shorts next to her at the starting line. “By mile seven or eight,” Stephanie says, “we took a curve and she gets in front of me with a sign on the back of her shirt that said ‘God is not dead.’ That stuck with me.” She thought about that phrase long after the race, especially when she ran, and used it to redefine what her own personal faith looked like.

When I want to stop, I push through another lap, listing things I am grateful for.

Last year, due to the novel coronavirus pandemic, the Carmel Marathon was cancelled. “I had already trained and wasn’t going to stop. I put in over 400 miles and wanted to keep going,” explains Stephanie. So she decided to log the 26.2 marathon miles on her own, running five-mile loops in her neighborhood. “My neighbors were waiting on the circle ringing cowbells and holding signs. It was a struggle, but there were so many people that came out to cheer me on. Almost every single one of them was from my parish,” she says.

I don’t plan on running a marathon anytime soon, but Stephanie’s story about finding her faith and realizing her community resonated with me. I often feel like I’m just going through the motions in my life—with my faith, my family, and my community. With running, the motions are everything. You find your flow in the motions, and you find what works best for you.

My friend Kelly is a gymnastics coach and no stranger to a workout routine, but she is fairly new to a daily running practice. “I was never a runner growing up—we had to run in sports for punishment,” she tells me. When her daughter started running cross-country two years ago, she took notice of the discipline it takes to be a runner, especially when you run long distances. Kelly started running too and set a goal to run a minimarathon. “I started training, but I didn’t do very well and didn’t end up doing the mini,” she says. She hit a slump.

Slumps are common—in running and in life. Runner’s World recently asked runners to share tips and tricks when they hit walls or fall into slumps. Gratitude topped the list. I find gratitude helps on my runs too. When I want to stop, I push through another lap, listing things I am grateful for in my head as I go. Almost every time it empowers me to keep going.

Kelly agrees that running for a cause or purpose, or with something particular on her mind, helps push her faster and farther. She still wants to do the minimarathon at least once in her life, but for now she works toward smaller goals, such as running at least a mile each morning.

Running helps me carve out time to take care of my body, mind, and soul.

When everything shut down last spring, Kelly began running regularly again. “Every morning I go out and run. I pray. I listen to podcasts, and it is my time away to leave everything,” Kelly says. She explains that she not only notices how much stronger she is, but also how much more peaceful she feels after running. “I notice how much better my days go when I start with a run,” she says.

Both Stephanie and Kelly concur that running with their kids is a great time to connect. “It is an opportunity for us to talk about things going on in the world, the more difficult conversations, with no phones and nothing else distracting us,” says Kelly, adding that her daughter can be timid talking face to face, but opens up and asks more questions when they are running side by side.

I asked my doctor what she thought about running. She said that in addition to building muscle and improving the cardiovascular system, running can have profound impacts in other ways, such as developing creativity and relieving stress. She explained that once I get into a regular routine, my body—and mind—would crave it. She told me that if I stick with running, eventually I would be able to go more than just a few laps. I’m not sure I believe her about that part, but I do feel better while running—mentally, emotionally, and physically.

Running helps me carve out time to take care of my body, mind, and soul. I examine my faith and become aware of God’s presence in my laps. Life was full of changes last year, and running has given our kids an opportunity to open up to us in ways they might not have around the dinner table or in the car. I don’t know where this path might lead, but I know that running a little bit of it each day is good for my heart in more ways than I ever knew.