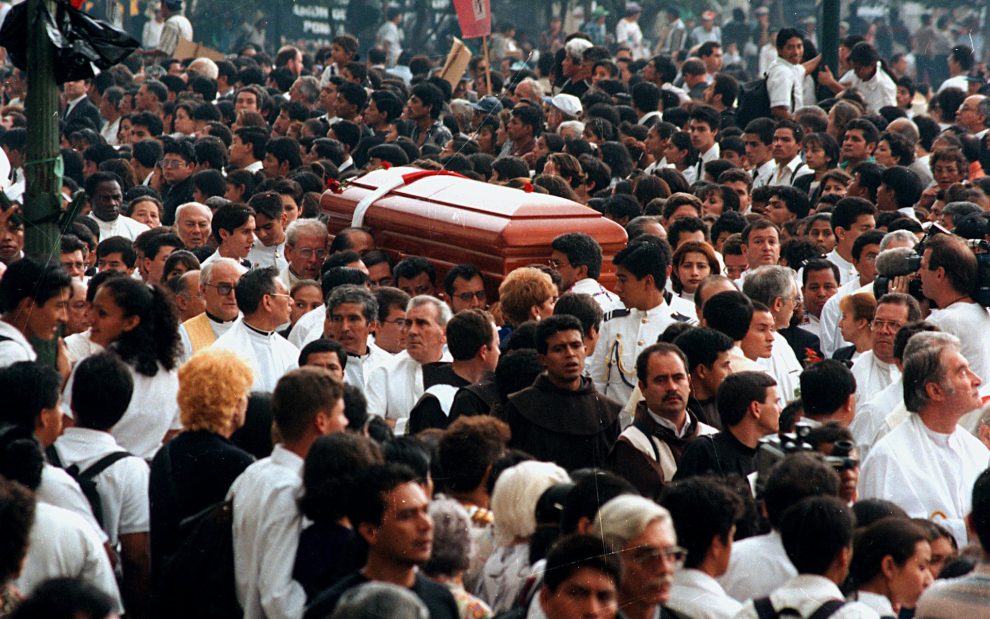 There is a lot of blood.

And then there’s the blood on the hands of the people who murdered bishop and parish priest Juan José Gerardi Conedera.

In Guatemala in the 1960s and ’70s, Gerardi was bishop of Verapaz and Quiché. He became auxiliary bishop of the Archdiocese of Guatemala in 1984. He was an outspoken human rights activist working for official acceptance of indigenous languages and the improved status of Mayan peoples. He openly criticized the military’s violence against Mayans and rebels during the country’s 36-year-long civil war (1960–1996), during which an estimated 200,000 people were killed or “disappeared.” After a visit to the Vatican in 1980, Gerardi was not allowed back into Guatemala. He spent two years living in exile in Costa Rica, returning home only after the nation’s president Fernando Romeo Lucas García was overthrown in 1982.

In the 1990s Gerardi was appointed by the government to a reconciliation commission that gathered facts and information about the violence during the civil war, seeking to make the history of those years more transparent.

On April 24, 1998 Gerardi presented a report, Guatemala: Nunca más! (Guatemala: Never Again!), summarizing statistics and statements about the atrocities and blaming the military for most of them. Two days later, he was killed. He was 78 years old.

A documentary about Gerardi’s death and subsequent investigation and trial is now streaming on HBO. The Art of Political Murder is executive produced by George Clooney. He and his wife, attorney Amal Clooney, are cofounders and presidents of the Clooney Foundation for Justice, which advocates worldwide for accountability for human rights abuses.

This is a darkly fascinating murder mystery—as filled with twists and turns as a fictional plot—but it’s true. It’s also a tale of political rivalries and cover-ups, some of them markedly clumsy, others nefarious.

The documentary takes its name from novelist and journalist Francisco Goldman’s 2007 book that explores the media circus, red herring leads (including a bizarre accusation that a German shepherd dog attacked the bishop), and obfuscation from official sources that created confusion and misdirection in the investigation and celebrates the ultimate and unprecedented trial results. Goldman first wrote about the case for the New Yorker in 1999.

Gerardi was beloved by the Ladino peasants and Mayans whom he defended. He was praised for giving a voice to the people so they could express their pain. Clips of news broadcasts show weeping crowds in the streets and a news anchor calling the bishop the “bravest human rights leader in Guatemala.”

Interviews with Goldman, crime scene investigators, and Gerardi’s human rights colleagues are compelling and often emotional. Ronalth Ochaeta, who worked with Gerardi, tears up when talking about events he says he hasn’t spoken of in 20 years. Ochaeta also delivers an account of a threat to his young son during the investigation that is chillingly terrifying and makes vivid the world which Guatemalan resistance must negotiate. Award-winning journalist Claudia Méndez Arriaza, who diligently covered the trial, went on to a Knight Visiting Nieman Fellowship at Harvard University and is a profile in courage and a sheer inspiration.

Modern digital images contrast with grainy historical footage, some of it gruesome and gritty, and director Paul Taylor augments this with reenacted scenes of the night of the murder. Like most real-life history, the narrative arc doesn’t work like a tidy movie plot, instead bogging down in periods of dry exposition and tangles of distracting subplots and procedural minutiae.

It isn’t entertaining. But it shouldn’t be.

This is history of which U.S. citizens should be more cognizant, particularly given CIA involvement in Guatemalan politics since the 1950s (which goes unmentioned in this documentary). This is a cautionary tale of racism, genocide, and what happens when governments and military operate as if they are above the law. This is an illustration of the crushing nature of oppression and the healing power of speaking truth—to fellow victims, to allies, and to power.