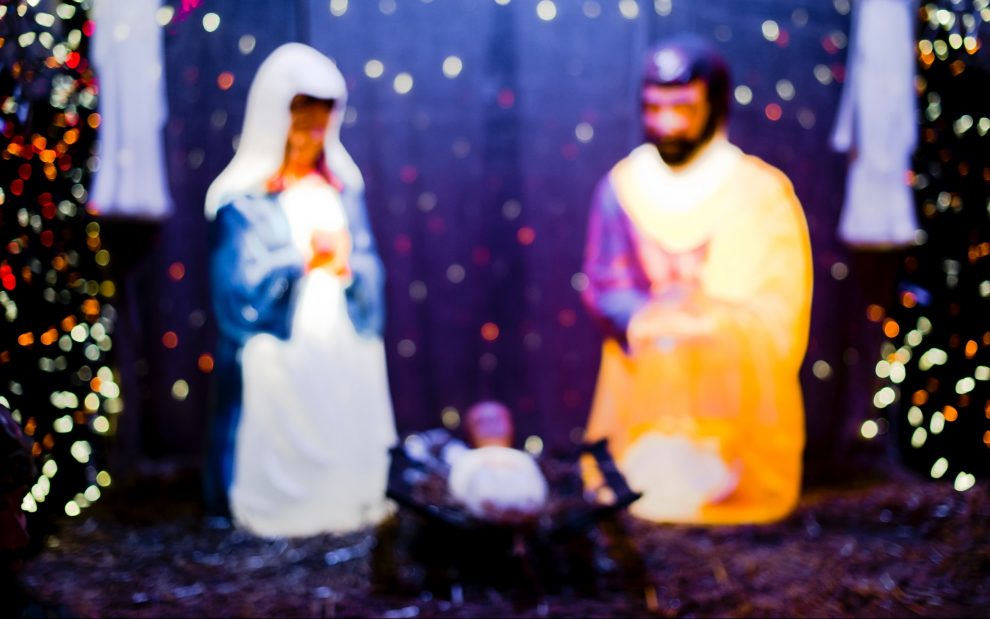 The story goes that one Christmas Eve St. Francis of Assisi thought of a new way to share the news of God’s amazing love and mercy, a way that would speak to poor people. He placed a model of the Christ child in a manger, with cattle standing by, and called people from nearby villages to adore the newborn God of the poor.

In a society where few could read, the explanations of theologians and the beautiful Latin chant of the Christmas liturgy passed over the heads of ordinary people. Who would explain to them what it meant that God became human, that Jesus felt at home among the poorest and loved them above all? They needed something visible, something they could see, touch, and so adore the beauty of the newborn child among the hay. So they came, saw, understood, and remembered.

Through the centuries Catholic people have continued the tradition, and it is the most wonderful affirmation of what our faith is about. The Christmas crib is a ringing proclamation about the kind of God we worship—a God who lives with the poor and ordinary and welcomes them.

In Provence, in southern France, the tradition of the Christmas crib grew in a special way and still persists. These Provençal crèches are made of brightly painted figures—often no more than three inches high. There is Mary, Joseph, and the Holy Child and, of course, angels, shepherds, and wise men. But gathering around them in all directions are people of the village, coming to the child, carrying whatever gifts they are able to offer the newborn.

The village baker in his apron brings a loaf; the cure in his black hat comes with an office book; an old woman brings a hen; children carry a basket of eggs; a mother and baby draw near with a toy for the Christ child. These scenes contain dozens of familiar figures.

When my children were little, we made our own versions: some we made not of clay but with bodies made of pipe cleaners and faces and hands of plastic wood. Then clothes were made from scraps of fabric and the stable-cave was made of brown paper and draped with cotton for snow.

The Christmas crib is a ringing proclamation about the kind of God we worship.

Years later my eldest daughter began to make them for her own children, but the people in her crib scene were not French villagers but English ones from her own experiences—the milkman with his rack of bottles, the fisherman with a big cod, folk dancers, local choir boys in red with white surplices, a schoolteacher with books, a little girl with flowers, an elderly couple bringing warm clothing for the child.

Nowadays, working in a shelter with homeless families, I set up a crib scene with figures my daughter made so that children who have never known the real meaning of Christmas see it and carry away a memory of another child who had no home but was loved.

In the weeks before Christmas, when every TV, newspaper, and store portrays Christmas as a super-consumer binge, it may be hard to hold onto Christmas as a spiritual experience. It seems all the more important then to struggle against the smothering of one of our most previous spiritual traditions—when the shopping malls place large models of the Christmas crib right in the middle of all the glitter as if to equate frantic spending with the Christmas spirit!

We need the Christmas crib. Ours is the God who is vulnerable, who needs love, who waits and welcomes. The Christmas crib doesn’t need to be great art; it just needs to be tender, human, and full of joy. If we have crib scenes in our churches, they too should be homely, full of the awe and ordinariness of a God who lived with poor, treated their sick, made friends with women and other despised people, felt comfortable with children, and preached liberation for the poor.

Ours is the God who is vulnerable, who needs love, who waits and welcomes.

The Christmas crib is a precious heritage, and if we lose or trivialize it or make it a sophisticated work of art to be admired, we are in danger of losing touch with the very heart of the Christmas mystery. The model of the child in the manger with all his loving and delighted attendants reminds us of the joy at the heart of the universe, of God who touches us and lives in us bodily—a God who is incarnate.

The Christmas crib is a sign of defiance in the face of what is greedy and cruel in our society and a sign of hope that the goodness is in us and near us as we greet the newborn child.

This article originally appeared in the December 1996 issue of U.S. Catholic (Vol. 61, No. 12). Click here to subscribe to the magazine.

Rosemary Luling Haughton is an author and cofounder of Wellspring House in Gloucester, Massachusetts, a community-based organization committed to social justice through education, shelter for homeless families, economic development, and low-income housing.