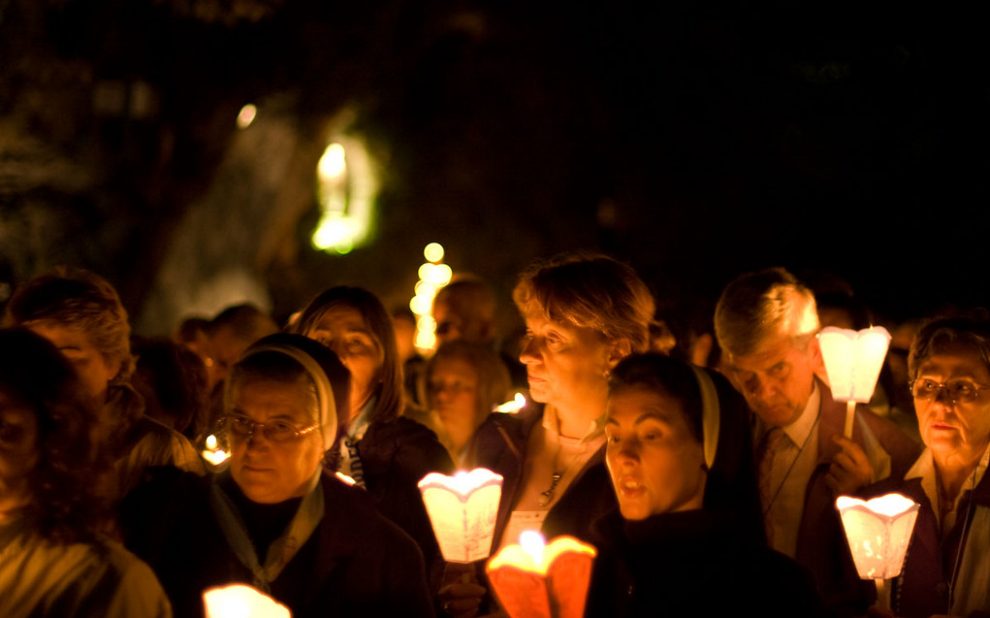 It was December and the night was crisp and chilly. From my doorway I watched in awe as a magnificent scene unfolded before me. A candlelight procession of men, women, and children praying and singing tradition posada songs was making its way down my neighborhood street. Children dressed as angels led the procession followed by a costumed Mary and Joseph, who were trailed by others dressed as shepherds.

Their singing filled the night air. Glowing candles illuminated the darkness. Even the stars in the dark sky seemed to have extra sparkle. The procession stopped at pre-selected houses asking for posada (posada means “lodging” in Spanish). They were refused until they came to the third and last house—my house—where I was the innkeeper who would welcome them.

When the pilgrims reached my house and asked for posada, I replied, “Aqui hay posada. Bienvenidos.” There is lodging here. Welcome. Everyone crowded into my house, about 35 people in all. After praying and singing, I served a traditional Mexican meal: tamales, reposteria (Mexican pastry), and hot whipped chocolate.

This reenactment of Mary and Joseph’s difficult journey and search for lodging before the birth of Jesus is known as Las Posadas. This beautiful Mexican tradition is celebrated during Advent in most Hispanic communities.

In my city of San Antonio many Catholic parishes sponsor this cultural and religious even, which originated in Mexico and dates back to the 16th century, when Spanish missionaries introduced the practice as part of their effort to spread the gospel among Mexico’s indigenous people.

Because it is a novena, or nine-day period of prayer, the journey is repeated for nine nights before Christmas Eve. On the last night, the parish church is usually the welcoming innkeeper, and Mass is celebrated there.

When I hosted Las Posadas, I thought of it as a wonderful tradition, but after Hurricane Katrina, I saw it in a new light.

At the end of each night, a festive celebration with food, prayer, and song follows. Sometimes a piñata shaped like a star, symbolic of the one that guided the three kings to the newborn Jesus, is provided for the children. They take turns breaking the piñata (symbolizing breaking up evil) and scramble to gather the candy as it falls like confetti (representing God’s grace). It is a time of rejoicing for having found acceptance instead of rejection.

When I hosted Las Posadas, I thought of it as a wonderful tradition, but after Hurricane Katrina, I saw it in a new light.

In September 2005 San Antonio became the innkeeper who offered housing and hope to many displaced by the storm. Working as a freelance writer for a local newspaper several days after Katrina hit, I walked around a warehouse at a former air force base that had become a temporary home for hundreds of evacuees.

Their homes, that most sacred of places many of us take for granted, were destroyed.

Row after row of cots had hastily been set up for those being brought in by the planeload on the nearby runway. A maze of blankets, rumpled clothes, and shoes were scattered on top of cots. Children chased one another, oblivious of their surroundings, while grownups sat on the cots with vacant looks on their faces.

They never dreamed they’d be seeking shelter anywhere, much less in a city far from their homes, some told me. Their homes, that most sacred of places many of us take for granted, were destroyed. Their jobs were gone. At least for now, they said, they had a place to stay, and for that they were grateful.

As I looked at the faces of the evacuees, I thought about how lives can change in an instant. Life’s hurricanes can come swiftly with natural disasters such as Katrina. Other times, it’s the loss of a job or loved one, mental illness, or flight from one’s country that makes us homeless.

When thousands sought posada in 2005, a sense of compassion enveloped our community.

When thousands sought posada in 2005, a sense of compassion enveloped our community as we welcomed those less fortunate into our city and our hearts. It was the Christian thing to do. “For I was hungry and you gave me food; I was thirsty and you gave me drink, a stranger and you welcomed me” (Matt. 25:35). Isn’t that what Jesus taught us? Isn’t that what Jesus would have done?

Katrina and its victims have seared the spirit of Las Posadas into my mind and heart. May its message stay with us not only during the holidays but throughout the year.

This article originally appeared in the December 2006 issue of U.S. Catholic (Vol. 71, No. 12). Click here to subscribe to the magazine.

Lupe Ruiz-Flores is a freelance writer in San Antonio, Texas.