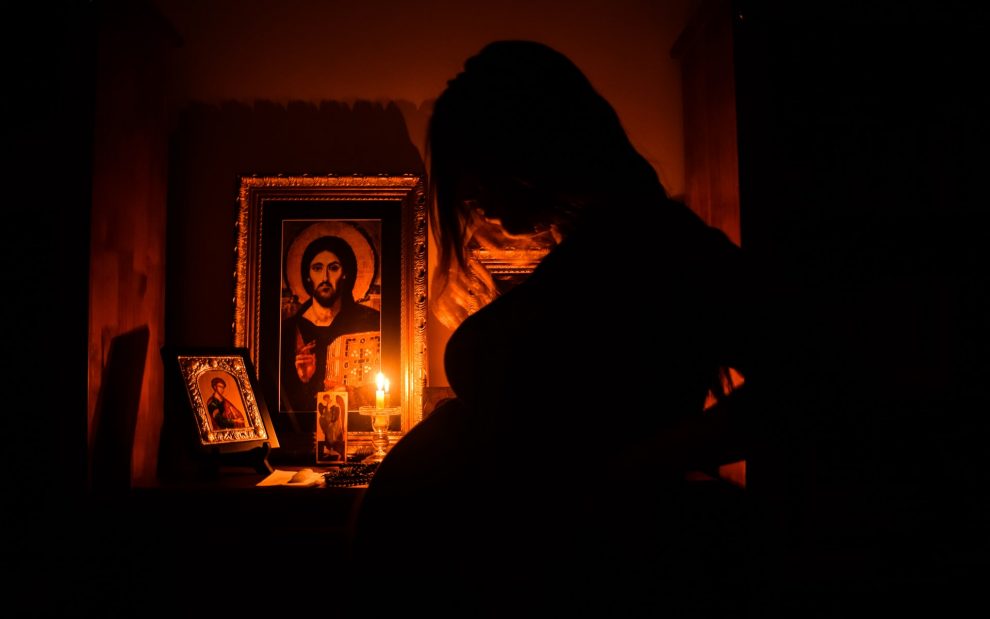 For modern Catholics, Advent is a season of extreme cultural disjunction between commercialized Christmas and the spiritual preparation for Christ’s birth. The materialism of Christmas overwhelms our public spaces. We are immersed in advertising even before Advent starts.

For Catholics who live in the Northern Hemisphere, the darkness of the winter solstice compounds this disjunction. Although darkness is a prominent theme in the Catholic mystical tradition, we have no communal language that expresses and makes real its sacred nature. Everything we hear dismisses darkness.

Even with a mystical tradition that recognizes darkness as sacred, religion and science have developed negative language about the dark. Even as metaphor, scriptural imagery—for example, “He has rescued us from the power of darkness” (Col. 1:13)—can confuse us into thinking that actual darkness is anti-God.

In outdated yet pervasive forms of science, darkness is the lack of light and material, the nothingness between the tiny spheres floating in space. We end up feeling darkness as a room with no windows or light—empty.

What we hear about darkness is magnified by what we have done to our world. We rarely encounter darkness on its own terms. Our web of electric lighting blasts into every corner of our living spaces. We have largely accomplished what our ancestors would have believed impossible and erased the stars.

Yet Catholics know that the presence of darkness is important and its effect is real, because we see it at the Easter Vigil and at midnight Mass for the nativity of the Lord. The Easter candle processes into darkened churches, a single wavering flame that expands into a blanket of stars. It is not an accident that midnight Mass, the center of our celebration of the incarnation, occurs in the middle of one of the longest nights of the year, whose shrouded embrace feels perfect for the coming of God’s human face. We feel the effect of the light because of the darkness.

Catholics know that the presence of darkness is important and its effect real because we see it at the Easter Vigil and midnight Mass for the nativity of the Lord.

The liturgical darkness of the Easter Vigil and midnight Mass connects us to an unbroken ceremonial practice that stretches back millennia. Humans have always used darkness to convey spiritual teachings, something indigenous people still retain. Native American and First Nations people see the dark winter as a time for storytelling. Night is the time of sacred ceremonies.

One example is the sweat lodge, the North America-wide Native ritual in which  practitioners enter a small hut with hot stones at the center. In the dark, practitioners say prayers and sing songs as they pour water on the rocks. By undergoing the ceremony, one reenters the womb to be purified by the darkness and heat, reborn to return to the world.

In the Navajo Way, one name for the sweat lodge is ch’ahałheeł biyázhí, or “little darkness.” The songs recount the story of the first sweat lodge, how after emerging into the Fourth World the people were lost. The Spirits saw the people’s bad behavior and sent them the sweat lodge ceremony to cleanse and purify them. Through the darkness the Spirits enter into the world, and Nihimá Ch’ahałheeł, “Mother Darkness,” absorbs the people’simpurities .

The ritual pairing and repetition of darkness and dawn in the songs emphasize what darkness is in the natural world: the counterpart to light. In this context, invoking darkness is not celebrating evil but the wholeness of our being and the world’s being, much like the world before the fall in the first creation story in Genesis. God’s word transforms chaos into a series of ordered pairs, including day and night, and structures creation in harmony. Darkness, in other words, is integral to God’s outpouring of creative love. It is invoked every morning of the Christmas octave in the liturgy of the hours:

Light and darkness, bless the Lord;
praise and exalt him above all forever (Dan. 3:72).

The sweat lodge ceremony returns practitioners to the center of their being within the created order. Emerging from darkness to starlight, they merge with the cool air and all that surrounds them. They learn in a new way that darkness has light of its own: of the night filled with the glints of living beings from fireflies to the reflection of feline eyes to the wavering stars above and their reflection in the snow. They feel not emptiness but the fullness of “dark energy,” the mysterious unseen force that science has revealed makes up 68 percent of the universe.

Indigenous teachings lead us to what darkness is in the Catholic way. In Catholic mystical tradition, darkness symbolizes fullness of encounter with God.

Dionysius the Areopagite was one of the most influential theologians of this apophatic spirituality, which emphasizes that God is beyond our senses and our capacity to fully understand. Despite all of the positive things we can learn and say, language is incapable of fully expressing direct encounters with God. As a result, for Dionysius, God ultimately exists in a kind of darkness.

The nature of God requires us to move beyond light, like Moses did on Mount Sinai. Dionysius recounts the story: After being purified at the bottom of the mountain, Moses “heard many trumpets and saw many lights streaming forth with pure and manifold rays.” He left the people and summited the mountain, entering a cloud on the peak, which Dionysius calls “the Darkness of Unknowing.” Only by leaving all light, thought, and sound does Moses “plunge into the Darkness where truly dwells, as the Oracles declare, that ONE who is beyond all.”

God’s darkness is not empty but full of hidden light, what Dionysius calls a “superluminous darkness” where “the pure, absolute and immutable mysteries of theology are veiled in the dazzling obscurity of the secret Silence, outshining all brilliance with the intensity of their Darkness.” Truth, in other words, is not found primarily in the light of clear ideas but the darkness of relationship with God. Like in the sweat lodge, the spiritual journey requires purgation, “pure and entire self-abnegation,” to be born on high “into the superessential Radiance of the Divine Darkness.”

In Advent, as the world builds to the winter solstice, the Earth becomes ch’ahałheeł biyázhí, a place where darkness can absorb our impurities, or Mount Sinai’s dark cloud of unknowing, a place where God’s mysteries embrace us in a new and deeper way. The darkness opens the door to truth as it suppresses human activity, noise, and light. A whisper is nothing in the din and chaos of Christmas commotion. But at night, in the silence, it is the loudest thing you’ll ever hear, the whisper of divine radiance that surrounds us and comes in human form at Christmas.

So this Advent, as you prepare for the Light of the World, find ways to rediscover the natural darkness that embraces us and make it a partner in your prayer. Listen to indigenous teachings and the teachings of Catholic mystics such as Dionysius and St. Bonaventure, who said, “Let us die, then, and enter into the darkness, silencing our anxieties, our passions and all the fantasies of our imagination. Let us pass over with the crucified Christ from this world to the Father.” Enter the superluminous darkness so that through Nihimá Ch’ahałheeł God may more fully embrace and transform all that you are.

Dr. Damian Costello is the author of Black Elk: Colonialism and Lakota Catholicism. He is a faculty member at NAIITS (formerly North American Institute for Indigenous Theological Studies) and the American Co-Chair of the Indigenous Catholic Research Fellowship (ICRF).