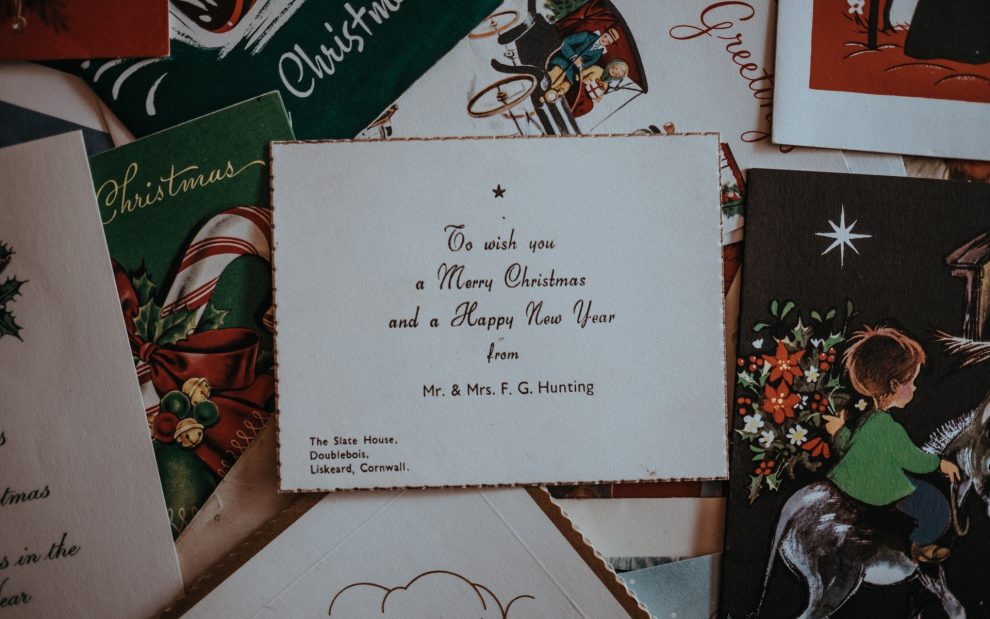 Every Christmas season my mom retrieves “The Book” from storage and puts it on display on the living room coffee table. It’s not a family Bible, but to us it’s akin to scripture. I’m talking about the faded ivory scrapbook filled with every annual Christmas letter from my parents’ 42 years of marriage.

Rubber-cemented into the early pages are purple mimeographed sheets and black-and-white photos of a chubby baby and then her less-chubby sister. Through the years Dad experimented with colored paper (mint green), colored ink (again, mint green), and eventually succumbed to the colorful Christmas stationary from the copy shop. Their latest letters are sheer wonders of desktop publishing, with a half-dozen color photos along with wrap-around text and catchy headlines.

Now I know that the mere mention of such Christmas correspondence is enough to turn even Cindy Lou Who into a Grinch. But an informal poll of my coworkers has determined that although about half of the world detests Christmas letter, the other half, well, they kind of like them. While it’s true that some read like an application to Harvard (“Little Johnny got straight A’s, is captain of the football team, and was elected class president!”) or are thinly veiled excuses for keep-up-with-the-Joneses bragging (“After our ski trip to Vail we took off four our timeshare in the Caribbean!”), many are simply meant to be heartfelt communications with friends and family.

In our family, the apple didn’t fall far from the keyboard—both my sister and I inherited the gene for writing Christmas letters (perhaps because my dad let each of us take a stab at it in high school, which resulted in prose only slightly better than the year he wrote it from the point of view of the “deer that got away” during hunting season). My sister has since handed over that holiday responsibility to her husband, whose dry wit makes his description of his daughter’s ballet recital read like a Dave Barry column.

I, on the other hand, am not funny, so instead I try to provide a little inspiration in my Christmas letters, tucking in prayers or quotes suitable for pinning on a bulletin board. A few years ago after a good friend died I was touched to learn that a “Signs of Inner Peace” quote I had included in a letter years ago was found taped to her computer.

Who could just delve right into a litany of the kids’ successes without somehow acknowledging the suffering and devastation in the greater world?

Over the years I’ve stopped writing newsletters—since, thanks to email, anyone on my Christmas card list already knows the news of my life—but rather have tried to offer a reflection on the past year, remembering the blessings, sharing the losses, ruminating on any insights or growth I’ve experienced.

I’m not the only one. More and more I’ve noticed that many Christmas letter writers are doing more than just listing the family’s accomplishments. Who could just delve right into a litany of the kids’ successes without somehow acknowledging the suffering and devastation in the greater world?

My new-and-improved style of Christmas letter began after a painful divorce, when a cheery “Here’s everything that’s great in my life” salutation just didn’t seem appropriate. After a two-year hiatus, I used my annual letter no so much to announce the news but to let people know I was doing OK and I appreciated their love and support. It seems like an increasing number of letter writers are recognizing the need to share the news of both life’s ups and downs.

The old complaint about Christmas letters was that they were impersonal. But with group emails and texts now a normal mode of communication, it’s hard to make the case today that a group letter is offensive. Instead, current Christmas letter Scrooges usually are put off by those overly peppy pronouncements of perfections accompanied by picture-perfect photos.

Current Christmas letter Scrooges usually are put off by those overly peppy pronouncements of perfections accompanied by picture-perfect photos.

So, if you write a Christmas letter—and I strongly urge you to try it if you don’t already—consider using it as an exercise to reflect on the past year, to count your blessings, and to share your prayers for the future. Consider it a gift to your friends and family—a gift of yourself.

This article also appears in the December 2005 issue of U.S. Catholic .