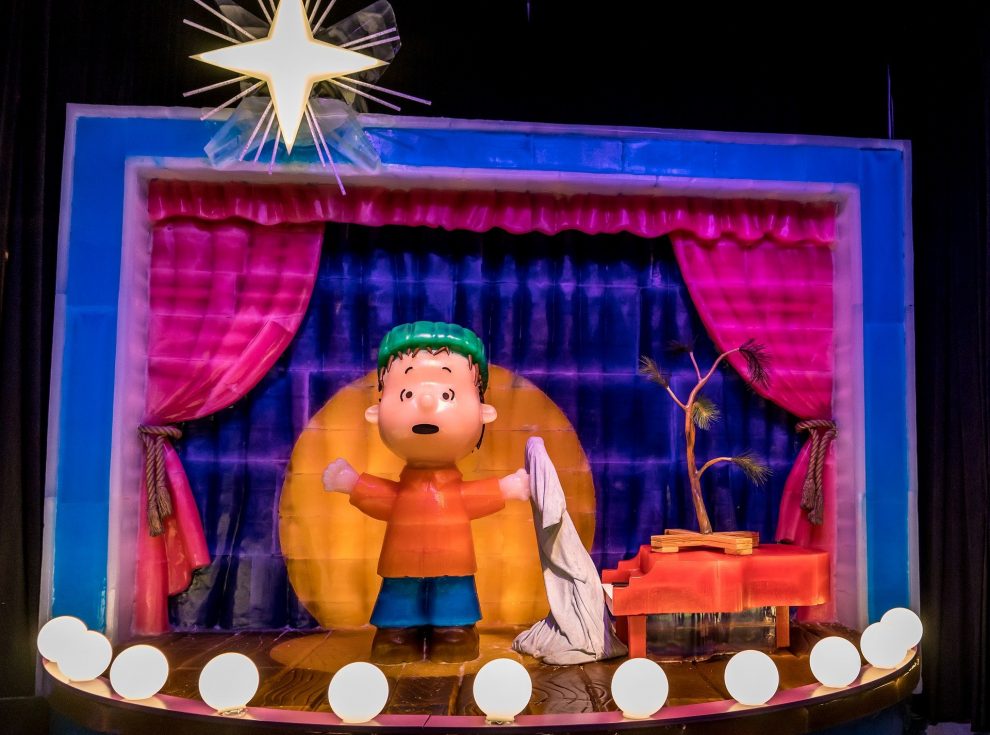 On December 9, 1965, 49 percent of the televisions in America tuned in to CBS for a new Christmas program created by Bill Melendez, Lee Mendelson, and Charles M. Schulz. A Charlie Brown Christmas became not only a holiday classic but also one of the most aired television shows of all time. What gives this 25-minute cartoon its lasting power?

A Charlie Brown Christmas’ success is hard to believe given that television executives and the artists themselves did not expect it to be successful. “We thought we’d ruined Charlie Brown,” producer Lee Mendelson remembered he and animator Bill Melendez felt after watching the final cut of the six-month rush job. Confused by the slow pace, outdated soundtrack, and religious theme, the network agreed and expected failure.

Yet it was this religious theme and slow pace that gave space to Americans dealing with massive cultural change to inhabit Christmas in a new way. Not only was Schulz able to create a religious program in an era that was intentionally secularizing, he also created a Christmas special that deals with the Death and Resurrection—the whole sweep of Salvation History in less than 30 minutes. Just as important, he gave viewers space to find themselves within it.

The simplicity of the art and plot set the stage for this deep existential conflict. The landscapes and skies perfectly capture the subtleties of the changing December world. Through the falling snow, wilderness reasserts itself and humanity is made a little smaller. The same is true of the simple narrative with a documentary feel, created in part by the innocence and authenticity of mostly amateur voices from children as young as four.

Schulz makes meditative space to find yourself within the story, bringing you back to your own childhood. A Charlie Brown Christmas is filled with vignettes—catching snowflakes, throwing snowballs, drifting on skates—that don’t advance the narrative as much as evoke the narrative-less character of so much of childhood, merely passing time in interesting ways as you mull over the world as it emerges to you.

Vince Guaraldi’s soundtrack provides the meditative tone. His improvised instrumentals of holiday standards, innovative yet always understated, are perfect for the open-ended character of childhood questions that only deepen as they age.

Even now when I see the program or hear the music something inside me says, “That was us.” In my memory of sledding with my siblings I don’t know if we were the Peanuts or the Peanuts were us—trudging up a snow-covered hill, the stars and the lights of houses across the valley winking on, the Christmas lights jumping out through the dusk—between rides pondering the big questions that the intensity of the Christmas season heightened.

This power to evoke big questions is a crucial part of A Charlie Brown Christmas’ lasting magic. Many other programs talk down to a child’s imagined limitations. A Charlie Brown Christmas talks up to viewers, giving voice to feelings and thoughts they were already having. It’s a guided meditation within the American civil religion of the now gone post-war consensus.

I am typically suspicious of the way civil religion waters down and domesticates the details of particular traditions, but here the creative stew of midwestern Protestant, urban Jew, and ethnic Catholic managed to heighten the delivery of existential questions by creating a pluralist tone that anyone can inhabit.

Not only was Schulz able to create a religious program in an era that was intentionally secularizing, he also created a Christmas special that deals with the Death and Resurrection.

Schulz, however, gives this pluralist meditation an evangelical answer. As a Sunday school teacher, he was well-practiced in distilling insights gleaned from a life of Scripture study.

Schulz is remembered by his family sitting in his easy chair scribbling notes in the margins of his dog-eared bible. I wonder what he wrote around Isaiah 53, the famous suffering servant passage, which provides the hidden narrative arc for A Charlie Brown Christmas. With it, Schulz transforms the Christmas pageant into a passion play, a medieval mystery play that helped popularize the Christmas tree.

Schulz’s passion play begins with communal disorder. The Peanuts gang refuses to play their roles in the play. They embody their rebellion in their unique dances, performing that they had “all gone away like sheep, each following his own way” (Isa. 53: 6). Charlie Brown strives repeatedly for order, but they spin further and further out of control. “It’s all wrong,” an exasperated Charlie Brown laments, capturing our universal brokenness.

In the midst of the Peanuts’ rebellion the tree appears unexpectedly. “A sapling,” “a shoot from the parched earth,” with “no stately bearing to make us look” “nor appearance that would attract us” (53:2). The tree remains silent and opens not her mouth (53:7), while becoming the catalyst for a final crisis. The Peanuts’ abuse of the tree leads Charlie Brown to voice our desperation: “Isn’t there anyone who knows what Christmas is all about?”

Linus recites the story of the birth of Christ from the Gospel of Luke. His words and the ensuing moment of silence dispel the chaos of the group. They stop doing their own things and inhabit the stillness of the tree for the rest of the show. The Peanuts now see a little of what Charlie Brown saw in the tree. When he takes it and leaves the auditorium, they follow on pilgrimage.

Though Schulz examines the holiday malaise of consumerism, he shows us an authentically American world that is not deformed by it.

Alone under the stars, the gospel words echo in Charlie Brown’s mind. He dances with the Christmas star outside. If this were just a Christmas special it would end here, with Charlie Brown having discovered the true meaning of the season. But this is bigger than Christmas.

Charlie Brown remains where Peter was in the aftermath of the Transfiguration, off to erect a booth to domesticate the vision of the savior that he thought he had seen. He does not know that his dance is along the Via Crucis, but the land does; the birches bow down in worship on this way of the cross.

They arrive at the temple of consumerism. Charlie Brown attempts to decorate the tree, but it collapses under the weight of a single red bulb, the whole weight of commercialism and “our infirmities” (53:4). Charlie Brown hangs his head in defeat (“I killed it”) and flees into the night like the apostles. The tree is not what he or anyone thought it was—glory comes through suffering.

And resurrection comes through love. The Peanuts arrive and their eyes are opened. Linus swaddles the tree with his beloved blanket and it straightens. The group unites to drape the tree with Snoopy’s decorations. The tree emerges transfigured, absorbing and recreating the trappings of consumerism into eternal glory, and enacts the Peanuts’ final transformation: not just united in silence but also now a single voice of harmony. They join in the hymn of the heavenly hosts, a choir of earthly angels that have become the stars above. At the center is the tree, who has become the Book of Revelation’s tree of life.

This, then, is the masterstroke of A Charlie Brown Christmas: through its pluralist tone it makes the audience feel the transformative effect of salvation history without knowing that it is happening. Though Schulz examines the holiday malaise of consumerism, he shows us an authentically American world that is not deformed by it. He brings children into this meditation and keeps us in its mystery as adults for not just a meaningful spiritual response to our growing holiday contradictions but also a vision of the final consummation, the resurrected Christ Tree.

That’s what A Charlie Brown Christmas is all about.

Who chose the books of the Bible?