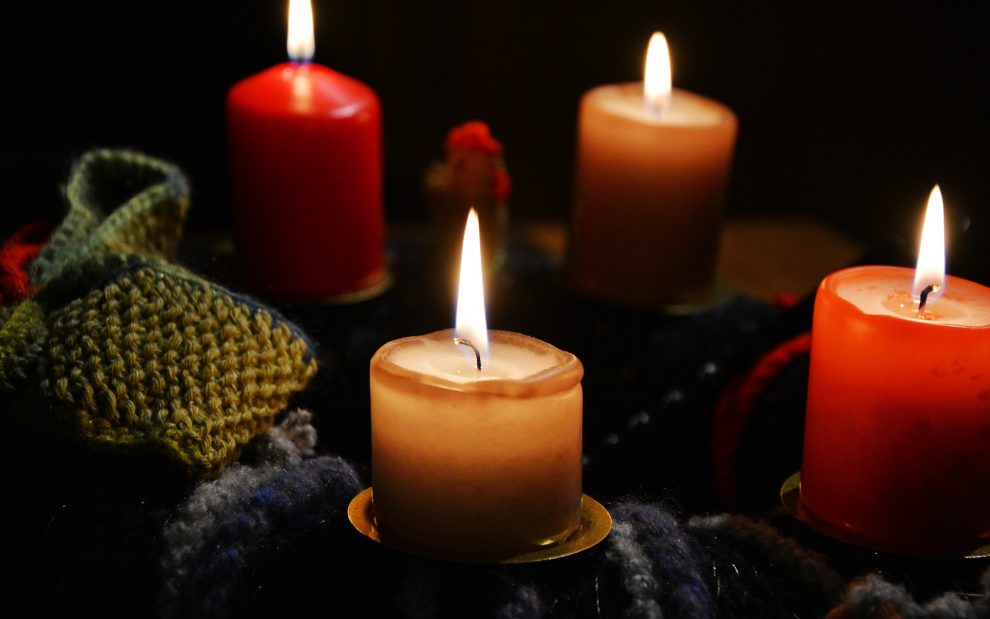 Even though I grew up Catholics in the 1950s and ’60s, I was only remotely familiar with the custom of the Advent wreath. One or two years during my childhood I remember my mother making an Advent wreath and placing it on our dining room table—which was used only for special occasions—and explaining it to me and my brothers and sisters. However, it just didn’t catch on in my family.

When I was in college, students put up an Advent wreath in the seminary chapel, sometimes placing it on a table in the sanctuary or, stretching the wreath concept, laying it out across the sanctuary in a straight line in front of the altar.

But it wasn’t until I went to St. Meinrad School of Theology in Indiana and saw a huge wheel of fire suspended from the ceiling by the monks in St. Meinrad Archabbey Church that I understood the importance of the tradition.

The custom of making an Advent wreath is both new—in terms of almost 2,000 years of church history—and old, having been started in eastern Germany by Lutherans a few hundred years ago, The wreath’s ancestors were most likely the religious fires kindled during late November and early December to brighten up the darkness of the short days of the year and to call back the sun’s warmth and power to provide food and life.

By the 16th century, Christians had found a way to baptize the “old ways” and apply them directly to the season of Advent. Instead of lighting Yule fires in their hearths, four candles, suspended in a chandelier and representing the four Sundays of the Advent season, were kindled successively to mark simultaneously the passing of the weeks, the lighting of the darkness, and the preparation for the birth of the unconquerable Son.

Around the four candles, traditionally three purple (for the first, second, and fourth Sundays) and one pink (for the third Sunday)—the same colors as the Mass vestments—was entwined a circle of evergreen, signifying the eternal life of God who sent the victorious light, Jesus, into the world.

The wreath’s ancestors were most likely the religious fires kindled during late November and early December to brighten up the darkness of the short days of the year.

Once the Advent wreath was firmly established in the home, it was only a matter of time until it made it into the home of the community—the church building. As a young priest I had large Advent wreaths made for the parishes in which I served. We hung them from the ceiling so that the whole congregation could participate in the blessing of the wreath and the lighting of its candles week after week until Christmas arrived.

For the first time in 1988 the bishops of the United States issued rites for the blessing of the Advent wreath and the lighting of its candles in the Book of Blessings. The bishops also included Advent wreath blessings in their 1990 Catholic Household Blessings and Prayers. No longer did we have to look for appropriate Advent prayers or compose our own.

And no matter what form of the blessing is employed, the words refer to “the light of Christ” who penetrates the “darkness of sin.” We pray as we light the candles of the wreath that our light may reflect the splendor of Christ and that the wreath and its light be a sign of Christ’s promise to bring us salvation.

Week after week, as each candle was lit, the whole church gradually became the circle of the light of Christ illuminating the darkness.

Every year around Thanksgiving I purchase four candles, set them on my table, and place them into a circle of fresh boughs from the evergreen trees in my yard. Before eating my dinner during the weeks of Advent, I pause for a moment, and, saying one of the prayers found in either of the books I mentioned above, I light the candles on my wreath (one candle the first week, two the second, and so on) until the whole circle is aglow with light.

One of the best Advent wreaths I have ever seen, at St. Elizabeth Ann Seton Church in Springfield, Missouri, consisted of four huge candles, each sitting on top of a six-foot pillar entwined with evergreen. Two pillars were placed in the sanctuary area of the church and two were placed in the nave. Week after week, as each candle was lit, the whole church gradually became the circle of the light of Christ illuminating the darkness. The members of that parish let their Advent wreath shine.

Father Mark G. Boyer is editor of the Mirror, the newspaper of the Diocese of Springfield-Cape Girardeau, Missouri, and author of books on biblical and liturgical spirituality.