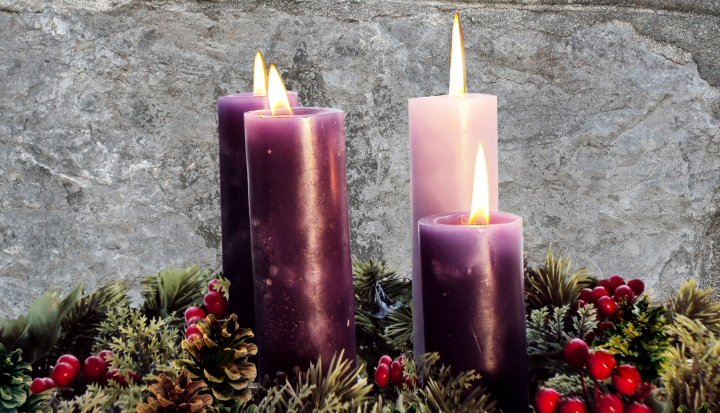 In a season filled with red Santa suits and green Christmas trees, the purple and pink candles of the Advent wreath can seem incongruous with many Catholic families’ usual Christmas decorations. The modern Advent wreath, created in 19th-century Germany by Johann Hinrich Wichern, featured red and white candles. While these colors may be more in keeping with traditional Christmas décor, they were most likely used because they were just what was available.
A Lutheran pastor, Wichern was actively involved in the Inner Mission movement, which promoted the development of social service organizations for the poor. In 1839 students at a school Wichern established for poor boys in Hamburg kept asking him when Christmas would arrive. Using an old cart wheel, Wichern crafted a wreath of four large white candles, with small red candles between them. The children would light a new candle each day, and a new white candle on each of the four Sundays of Advent. When all the candles had been lit, it was time to celebrate Christmas.
Subsequent generations of German Christians simplified Wichern’s original design, making wreaths with only four red candles. Other Christian churches soon adapted the wreath for their own needs and understandings of the season. To reinforce the symbolism of the liturgical vestments worn by priests, Catholics swapped the red candles for three purple candles—the color typically associated with penance—and one pink, the color of rejoicing worn on the third Sunday of Advent. In Orthodox Christian churches, where the observance of Advent lasts 40 days, the wreath has six candles that are green (faith), blue (hope), gold (love), white (peace), purple (penance), and red (communion). Members of the Moravian Church use four plain beeswax candles that can be made at home, reflecting a faith tradition that values simplicity and domestic work.
Lutherans in the United States today are split over how an Advent wreath should be constructed. Like Catholics, members of the Lutheran Church-Missouri Synod use pink and purple candles. Arguing that the focus of Advent should not be penance, as symbolized by the use of purple, the Evangelical Lutheran Church of America teaches that the Advent wreath should be made with four blue candles, symbolizing hope and expectation.
In less than 200 years, the Advent wreath has become an important and meaningful part of the Advent season for Christians on both sides of the Atlantic. It is also a tradition that is still evolving, and even at the highest levels of the Catholic Church can reflect both theological meaning and cultural significance. In 2006 photographers snapped a few shots of the Advent wreath in Benedict XVI’s office. The German pontiff’s wreath featured four red candles.
This article appeared in the November 2015 issue of U.S. Catholic (Vol. 80, No. 11, page 24–29).
Image: rgbstock/Newsham
TagsAdvent Christmas Church holidays Glad You Asked