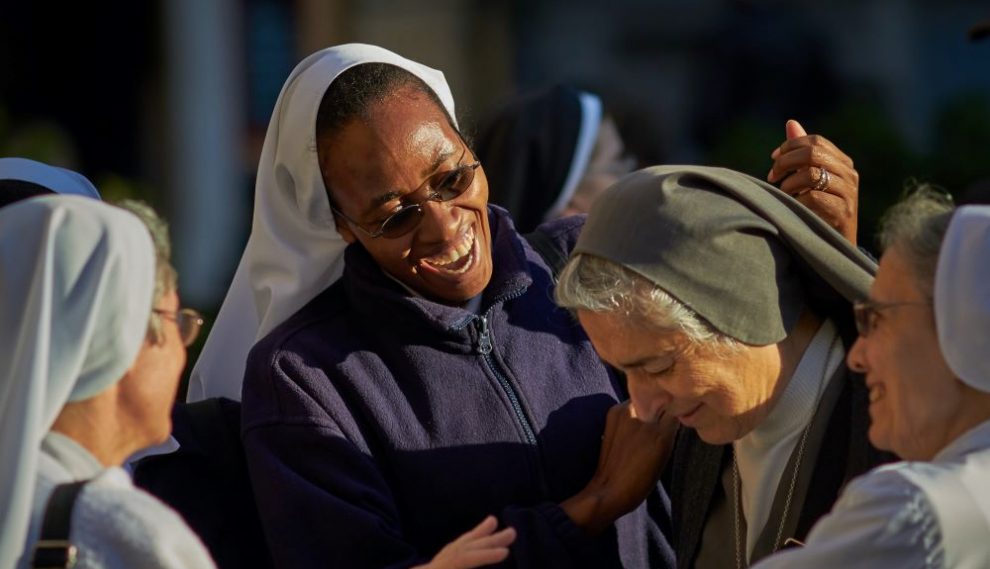 “There is so much going on in the world today, how can I keep my faith when the world feels like such a negative place?”

“This 24-hour news cycle is making me lose my faith in humanity!”

“Who do I look to when I don’t see anyone making decisions that align with my faith?”

As a high school teacher, these are questions I am asked often by young women as they struggle to find their places in the Catholic Church and in the world. Depending on the anxieties behind their questions, I share different stories of women in the church as examples of people to follow.

Sometimes my students hear about Jeannie Kirkhope, the founder of the Appalachian Catholic Worker in Roane County, West Virginia, who has a love and stewardship of the land, the hills, and the people of Appalachia that is as awe-inspiring as the landscape. Sometimes I tell them about a beloved college professor, Eileen Daly, who called me into her office one day and stared at me for what felt like a whole five minutes before asking “What is your purpose?” I was a terrified freshman, but that conversation gave me the wake-up call I needed to grow in my faith. Or maybe they hear about Léocadie Lushombo, who I befriended in seminary. Léo is from the Democratic Republic of the Congo; our lives are different, but those differences informed our faith sharing and friendship in beautiful ways. We learned what it meant to be a woman in both of our cultures and how we can inform each other in our spiritualities.

When a student is struggling with how to engage in contemplative action, I direct them to Sisters of Mercy JoAnn Persch and Pat Murphy. Both women have dedicated their lives to issues surrounding immigration, refugees, detention, and homelessness. They lobby, protest, hold vigils, and educate others on these important issues regularly. These women are inspiring in their drive to never give up, no matter what policies change or how difficult, disturbing, and draining the work can be. These contemporary women who dedicate their lives to others in such a visible way are 86 and 91 years old respectively and have each been doing this work for more than 50 years. I love to tell my students of the dedication these women have to their cause of drawing attention to the marginalized and vulnerable.

Oftentimes, the young women and men who come to me with questions about leadership in the church are ready to throw in the towel.

Every Friday morning at 7:15, Persch and Murphy lead a vigil at the U.S. Customs and Immigration Center in Broadview, Illinois, a staging center where immigrants are taken to be processed before they are detained in county jails. They have made other Catholics aware of this issue and created a community that prays together toward a direct cause. Persch and Murphy are also present in the community surrounding the Broadview immigration center; their presence to the community in every way is inspiring.

When a student is struggling with how to bring their care for the environment and creation into their prayer and service, I steer them toward Franciscan Sister Ilia Delio. Many of my students struggle with the idea that science and faith can go hand-in-hand. The further they advance in their academic studies in the sciences, the further they turn away from theology. Delio writes about the universe and creation with a theological sense that meets those fact-searching, academic questions. Her theology is comforting in its complexity.

Another woman that I turn to for comfort when dealing with my love of creation and my love of living in the city is Ivone Gebara. Gebara writes about creating an urban ecofeminist spirituality in Longing for Running Water: Ecofeminism and Liberation (Fortress Press). Sometimes the cries of the Earth are drowned out by the noises of the city, and Gebara’s work has helped me to make better connections to ecology when I feel removed from the awe of creation. “Neutrality is not possible,” she reminds us. My high school students are caught up in this world of fast-moving technology and new ideas. I go back to this quote regularly, for myself and to guide my students as they create their own spiritualities.

There could never be an exhaustive list of Catholic women whom we can look to for guidance during our own doubts and times of crisis.

When my students are overwhelmed with the needs of the world or their families, I teach them about the strength of Franciscan Sister Thea Bowman. Bowman’s grandfather was born into slavery, and his stories informed her desire to pursue roles in education and ministry. Bowman’s father was a doctor, and her mother was a teacher. With their permission, she converted to Catholicism at age nine. Bowman may be best known for her work in the publication of Lead Me, Guide Me: The African American Catholic Hymnal in 1987. The experience of liturgy was important to Bowman’s spirituality. She advocated for liturgy that celebrates experiences and cultures that are marginalized in mainstream churches and publications. She became a consultant for intercultural awareness in the Diocese of Jackson, Mississippi and spoke globally about the need to celebrate different cultures in worship.

The Jackson diocese has opened the cause for Thea Bowman’s canonization, and she has been designated a Servant of God. My favorite quote from Bowman is from an interview with 60 Minutes: “I think the difference between me and some people is that I’m content to do my little bit. Sometimes people think they have to do big things in order to make change. But if each one would light a candle we’d have a tremendous light.”

When a student is struggling with where to look for leadership in the church, I send them to pray with Phyllis Zagano. Zagano’s tireless efforts to work for the understanding and inclusion of women’s experiences in spirituality and liturgy are incredibly inspiring. Oftentimes, the young women and men who come to me with questions about leadership in the church are ready to throw in the towel. They don’t like what they see from the outside. The writing and advocacy of Zagano call us to constantly remember the dignity and worth of all human beings. The questions she asks are so challenging and thought-provoking that they lead to great discussions and spiritual awakenings about who and what is worthy and sacramental. Zagano is a great example of a woman who loves her faith, community, and tradition, but who still has questions. Those questions are important for young women as they look for role models in the church today.

There could never be an exhaustive list of Catholic women whom we can look to for guidance during our own doubts and times of crisis. The women highlighted here are only some examples of how the Spirit is working hard to provide us with women role models in the church. What inspires me is that women of all ages continue to look for Catholic women to follow—and that maybe one day, I’ll be able to add a student of my own to this list.

“The Spirit is working hard to provide us with female role models in the church,” says Bernadette Raspante in her essay above. “There couldn’t be an exhaustive list of women to whom we can look for guidance during our own doubts and times of crisis.” Yet, according to many U.S. Catholic readers, the church still often falls short in promoting and recognizing the value that women bring to the Catholic faith.

Almost 130 readers responded to a U.S. Catholic survey that asked which Catholic women they find most inspirational and about the problems women still face in the church: Ninety-three percent of them said that women and men do not maintain equal
status in the life of the church today.

Despite this, a majority of readers surveyed have personally encountered female leaders in their own communities: Seventy-one percent say their parish has women in leadership positions, 65 percent have heard a woman preach in a Catholic context, and 86 percent have had a female teacher of religion or theology.

U.S. Catholic also asked readers to name the Catholic woman they find most inspiring. Many readers named historical saints, including St. Catherine of Siena and St. Monica, and many named contemporary Catholic figures such as Benedictine Sister Joan Chittister and Phyllis Zagano. But the most common response by far was Dorothy Day.

“She lived her life for others, following the path of Jesus,” says Jill Johnson of Cincinnati. Cathy Peterson, from Catawba, Wisconsin, says that Dorothy Day “exemplifies what a woman can do to help others.”

When asked to define what it means to be an inspirational Catholic woman, readers commonly mentioned living the gospel, working for peace and justice, and leading through action.

Others said they were inspired by those who speak up even when their voices go against the grain. Carol Prokop of Chapel Hill, North Carolina says that an inspirational Catholic woman is someone who “speaks up for the oppressed and for the truth, whether the Catholic hierarchy likes it or not.”

Although the overall mood of the survey responses was somewhat cynical about the current standing of women in the Catholic Church, some readers offered a tentatively optimistic viewpoint. “Women do not lead in response to a title but in response to a need. Although that leadership may go unnoticed and unnamed, this only proves that it is in giving that we receive,” says Connie Kearns of Springfield, Ohio. “Most often, this is enough.”

TagsWomen in the church Women religious

Bernadette Raspante is a high school religion teacher in Chicago.