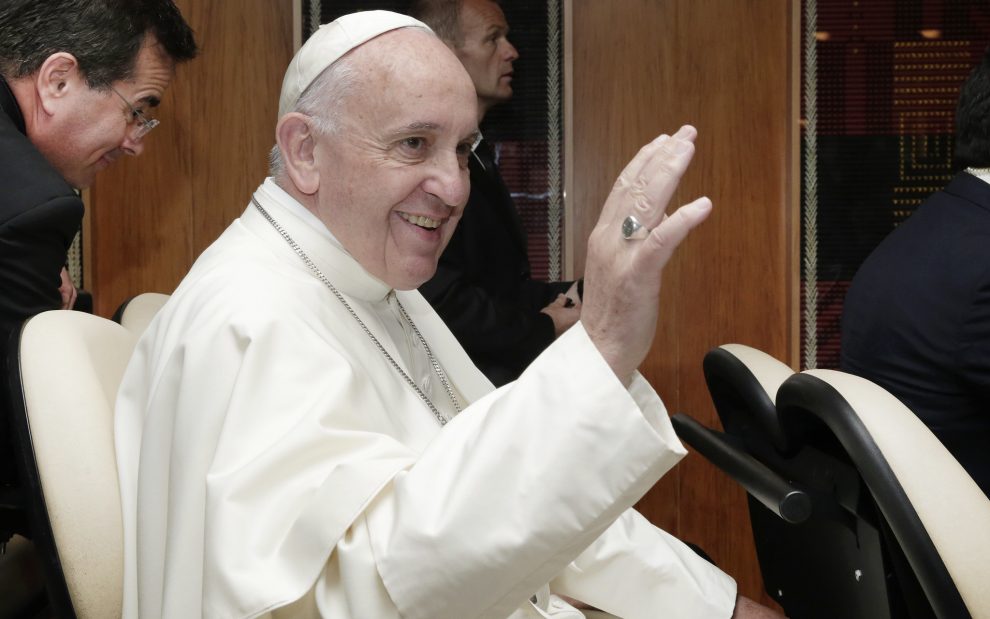 Striking comments from Pope Francis regarding same-sex civil unions recently emerged in a new documentary and have led to no small amount of media hype and social media commentary.

The reactionaries are reacting, as might be expected, often with the intention of painting Francis as a radical who is out of step with church teaching or by optimistically interpreting his words as far more progressive than a fuller appreciation of his thinking permits.

Nonetheless, the pope’s opinions on this matter are significant. Appreciating the scope of their significance requires some consideration of their context and attention to what was and was not actually said.

A new documentary featuring Pope Francis includes a scene where the pope expresses support for civil unions of same-sex partners. This has come as a shock to some and a welcome advance to others. I would like to offer a few observations.

First, official Catholic teaching has not changed. To be of consequence to official teaching, Francis would have to speak or write within his official capacity as pope. It does not seem comments within an interview accomplish this standard and should instead be taken as expressions of personal opinion.

Second, and in particular, the pope’s statements do not change church teaching on marriage and family. While Francis does speak of welcoming same-sex partners, the “family” to which he refers is the family of the church. He has repeatedly insisted on marriage as the foundation of the family and his support of civil unions is motivated by his concern that marriage be understood as a union of man and woman.

While Francis does speak of welcoming same-sex partners, the “family” to which he refers is the family of the church.

Third, Francis is neither the only Catholic bishop to publicly support same-sex civil unions nor is such support new. Differences in culture, legal practices, and moral judgments have led many bishops around the world to similar positions, although most national conferences of bishops have not supported this nor has the Congregation for the Doctrine of the Faith (CDF) in Rome.

Fourth, Francis’ approach to this issue is unique and suggests a different moral perspective for thinking about civil unions. Previous considerations by the CDF identified the issues primarily as a threat to heterosexual marriage and state approval of immoral sexual behavior. Francis approaches the issue through concern for the rights and well-being of individuals within same-sex relationships.

Why do the pope’s remarks matter?

Regardless of one’s approval or disapproval of Francis’ view, we should accept that this is, first and foremost, the private view of the pope and not a reformulation of Catholic teaching.

Nonetheless, it stands in tension with existing statements of the CDF and opens a door to thinking about this issue in a new way that could ultimately lead to revisions in the Catholic Church’s official position. If such revisions were to occur, they would not seem to constitute a contradiction of existing teaching but rather authentic development based on new information and additional moral considerations.

Currently, a clear disapproval of legal recognition for same-sex civil unions found in a 2003 document from the Congregation for the Doctrine of the Faith promulgated under St. Pope John Paul II stands as the most recent and authoritative word on the issue. The 2014 and 2015 Synods on the Family revisited this judgment and, while some alternative proposals were made, ultimately reinforced the existing position.

Pope Francis’ response to the synod, Amoris Laetitia (The Joy of Love), likewise cites the early CDF document approvingly. As such, it seems clear any potential developments to Catholic teaching that Francis may foresee are unlikely to substantively impact Catholic teaching on marriage and family.

It is relevant, however, that existing authoritative documents of the CDF appear to directly contradict the pope’s concern for promoting human dignity regardless of sexual orientation or relationship status on more than this issue alone.

These documents support discrimination against homosexual persons in employment and housing on the principle that anyone who is openly homosexual constitutes a risk to children and families. This judgment runs in clear contradiction to both the social value presently placed on honesty about one’s self and sexuality as well as Pope Francis’ own stated concerns.

While the Catholic Church has insisted throughout the modern era that civil laws must follow the natural and God-given pattern for marriage, the church has simultaneously insisted on respect for human dignity and just social systems.

Although revising judgements of the CDF is well within the pope’s authority, Francis has allowed these judgments to remain unchallenged as clarifications of official Catholic teaching.

Francis has consistently shown that he is uninterested in a perception of uniformity on controversial issues at the expense of honest dialogue and open discussion. By acknowledging that he is among those who find arguments for civil unions convincing, Francis draws further attention to the processes of discernment behind Catholic moral teaching.

This more messy and open style, in fact, seems to be the kind of church Francis envisions.

Unlike previous considerations of civil unions, Pope Francis appears to be approaching this issue primarily out of concern for the rights and well-being of individuals in same-sex relationships. This prioritizing of the person and their situation is characteristic of a pope who has repeatedly emphasized the importance of pastoral care and mercy.

The church is an old institution and statements of the last 30 years cannot be taken as absolute limitations on future possibilities as social issues and moral perspective continue to evolve. Considered within historical context, it was not long ago that the Catholic Church vehemently opposed the right of states to legally regulate marriage while today this same power of the state is accepted as central to Catholic considerations of same-sex civil unions.

Marriage is a reality that operates at many levels. While the Catholic Church has insisted throughout the modern era that civil laws must follow the natural and God-given pattern for marriage, the church has simultaneously insisted on respect for human dignity and just social systems.

Legal marriage often comes packaged with a suite of benefits that help spouses care for one another (on matters such as power of attorney, hospital visitation, inheritance, etc.). While many of these protections can be gained through other legal means in many nations, civil unions represent another way of similarly packaging of these benefits.

Francis’ support for civil unions stems from their protentional to assure that same-sex partners can be cared for and have the power to care for their loved one, which he sees as a matter of human dignity.

Where do we go from here?

While Francis has not changed official Catholic teaching, he has revealed the dialogical process of discernment that is necessary for growth as the church continually seeks to remain rooted in tradition as well as responsive to the needs of the world.

This will be unsettling to those who think of all of Catholic moral teaching as handed down changelessly rather than as grown through the often-messy realities of faithful discernment. For those who seek dramatic change, this relatively small admission of differing points of view within the Catholic hierarchy will likely prove disappointing as institutional change remains slow to develop.

While this statement may be of import in nations considering revisions to marriage laws, for most American Catholics, frankly, this ship has already sailed. It seems unlikely that a lasting repeal of the extension of marriage to same-sex partners will gain majority political support among U.S. citizens, let alone U.S. Catholics, in the foreseeable future.

This will be unsettling to those who think of all of Catholic moral teaching as handed down changelessly rather than as grown through the often-messy realities of faithful discernment.

Moreover, the threatened devastating effects of legalizing same-sex marriage that arose within earlier political debates have failed to materialize both in the United States and in other nations that have similarly expanded marriage rights. Within the United States, the rate of marriage to divorce has remained stable for 40 years with a peak well before civil unions were a matter of serious political debate. Both marriage and divorce rates have decreased markedly in the last 30 years while non-married cohabitation has increased dramatically. Civil unions appear to have had little impact on these larger trends in marriage.

Despite a great deal of moral concern, the factors driving these trends are social and economic at least as much as they are personal and moral. Couples who invest in long-term commitment to their spouse do tend, on the whole, to experience a range of benefits including longer and more fulfilling relationships. However, social and economic factors often erode the conditions that make long-term commitment, and even long-term thinking, a possibility. Adequate wages, stable employment, and access to affordable health care are all preconditions for an orientation towards the future that supports the possibility of long-term commitments.

Francis’ comments seem to present an opportunity for Catholics to think about the way moral issues have been framed and what other Catholic commitments may be at stake.

Consistent with his papacy, he has again prioritized the need to welcome all persons regardless of their situation into the life of the church and to respond to their needs both compassionately and mercifully. Moreover, he has repeatedly reminded Catholics that we must first and foremost encounter others in their humanity and in light of their human needs, rather than through moral condemnations of their actions or conditions.