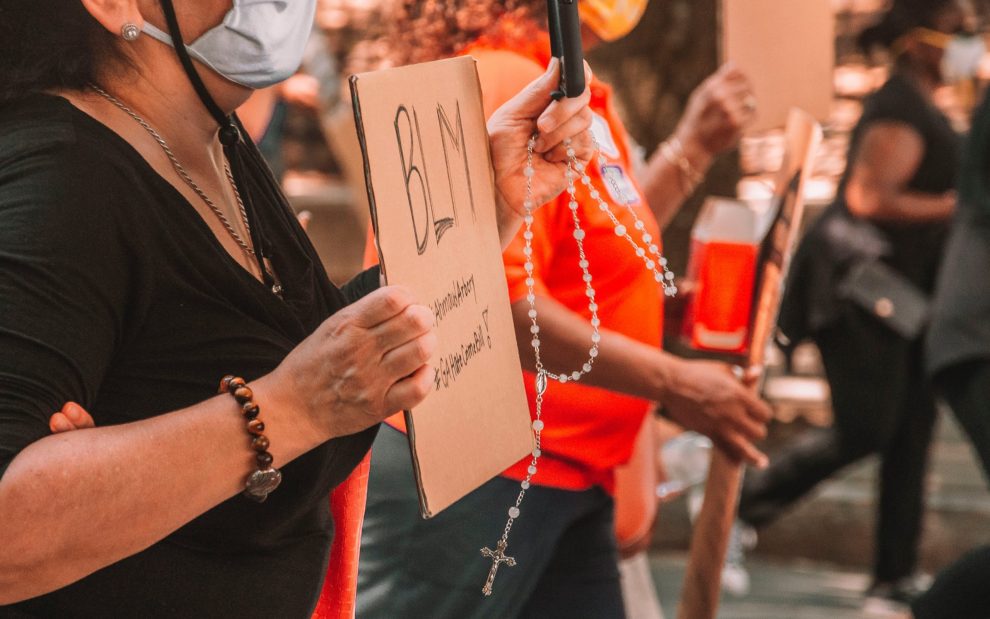 Like many Christians, I have been a committed pro-life advocate all of my life. From childhood, I participated in the March for Life and various anti-abortion rallies in my community, and both my Catholic grade school and Protestant church insisted that abortion was the most important social issue of our time.

The preeminence of abortion as a pro-life issue in the Catholic church is cemented in St. Pope John Paul II’s assertion that “the common outcry, which is justly made on behalf of human rights . . . is false and illusory if the right to life, the most basic and fundamental right and the condition for all other personal rights, is not defended with maximum determination.” (The U.S. Conference of Catholic Bishops recently affirmed this.)

Growing up, rarely, if ever, did I hear religious institutions condemn systemic racism and the structures that marginalize people of color—unless it was to condemn racism inherent in the abortion system itself with racially problematic assertions like “the most dangerous place for a black child . . . is in their mother’s womb” or claims that Margaret Sanger (founder of Planned Parenthood) actually intended to exterminate all people of color. (This accusation is not without merit though it may be somewhat misconstrued, and it is never noted, of course, that the pro-life movement has its own ties to white supremacy.)

Now, however, Pope Francis has linked the two issues: “We cannot tolerate or turn a blind eye to racism and exclusion in any form and yet claim to defend the sacredness of every human life.”

There is no ambiguity here: Pro-life efforts must involve anti-racism efforts, or they are disingenuous. The protests that have erupted around our nation in response to the killings of Black people by police and vigilantes challenge us as a nation to examine the racism embedded in our social structures.

As pro-life advocates, we must consider whether our efforts to protect the unborn perpetuate “racism and exclusion.” The 2020 March for Life promoted the theme “Life Empowers: Pro-life is Pro-woman,” but we must ask: Is pro-life pro-Black woman?

It is easy to claim that pro-life advocacy promotes the well-being of all women by working to protect their children and their vocation to motherhood. But this is too simplistic—like saying “all lives matter.”

Unfortunately, the factors that motivate women to procure abortions (e.g., financial insecurity, educational or professional needs, and lack of prospects for the child’s future) map closely onto those areas that discriminatory practices throughout our nation’s history have perpetuated within the Black community.

Further, though we often focus on the rosy, idyllic aspects of motherhood, an honest assessment reveals that pregnancy and childrearing impose significant burdens on women, and Black women in particular carry these in ways that are directly linked to their existence at the intersection of two historically oppressed groups.

“We cannot tolerate or turn a blind eye to racism and exclusion in any form and yet claim to defend the sacredness of every human life.”

As Catholics, we must demand that anti-abortion bills be complemented by legislation that supports women—women of color in particular. And we should critique, rather than unreservedly praise, anti-abortion efforts that fail in this regard.

There must be an integrated approach to both issues if we are to be authentically pro-life: Pro-life advocacy cannot be divorced from advocacy that works against systemic racism or it will perpetuate those racist systems.

Historically, we have seen this most viscerally in the system of slavery, when white captors bred enslaved women to increase their “property value.” As Shyrissa Dobbins-Harris argues, Black women procured abortions because “[r]efusing to produce more Black children to sustain the system of slavery was proof of the agency of Blackwomen [sic], and the lengths that they would go in order to exert it over themselves.”

Because a cornerstone of Christian ethics is that human beings are never to be used solely as means to an end—indeed, this is the paradigmatic violation of dignity—we are hard-pressed to condemn these women’s actions though we might lament the loss of their children.

We can observe contemporary instances of anti-abortion efforts that perpetuate systemic injustice as well. In Louisiana, for example, the maternal mortality rate is more than double the already abysmal rate of the United States as a whole, affecting Black women four times more than white women.

In June 2020, when the Supreme Court struck down Louisiana’s 2014 Unsafe Abortion Protection Act, which mandated that doctors performing abortions should have admitting privileges at a nearby hospital, pro-life advocates decried the decision, rightly arguing that it enabled the abortion industry to put profits over the health and safety of women.

The act, however, also likely would have allowed “wealthier, disproportionately white women [to] have greater access . . . to abortion care than Black women,” which would mean further disparities in maternal risk—especially since people of color are far less likely to have health insurance coverage than white people.

Further, while education is one of the primary means through which a person can overcome poverty and cultivate her gifts to participate in building our society, only 53 percent of teenage mothers complete a traditional high school degree.

This is compounded for Black females, who are already less likely to graduate from high school than their white peers: Black female teenagers experience pregnancy at a rate double that of white youth. Research suggests that high levels of teen pregnancy among black youth result from their perception of limited life chances in an unfortunate self-fulfilling prophecy.

As Catholics, we must demand that anti-abortion bills be complemented by legislation that supports women—women of color in particular.

In other words, the marginalization of people of color contributes directly to higher levels of unplanned pregnancies, which correlate to lower levels of education and higher levels of poverty for Black women . . . and the cycle continues, further impeding the participation of Black women in social and political life.

We should note, too, that 2 out of 5 Black women in college are raising children, and, importantly, when Black women are employed, the gender and racial pay gaps (approximately 20 percent and 25 percent, respectively) collide to give them approximately 61 cents for every dollar earned by comparable white men.

Systemic issues contribute to these health, educational, and professional barriers for Black mothers, and motherhood exacerbates these systemic issues. According to a 2013 study in the American Journal of Public Health,  “These disparities are related to systemic hardships experienced by disadvantaged communities, including decreased access to health care, higher levels of stress, exposure to racial discrimination, and poorer living and working conditions.”

While pro-life organizations laudably seek to alleviate the pressure to procure abortions by providing care to pregnant women in marginalized communities, the systems of oppression to which Black women have been subjected make it necessary to dismantle those structures in addition to offering personal support.

Political advocacy that neglects the particular interests of Black women or attends only superficially to their needs is incompatible with a pro-life ethic. The right to life may be preeminent, but systemic racism undermines this right in dire ways—ways which abortion limits, if not carefully crafted, will perpetuate.

As the pro-life aim of empowering women and protecting human life is advanced, the ways in which women are made vulnerable specifically through pregnancy and motherhood—those circumstances where prohibiting abortion actually and critically endangers or marginalizes Black women—must be considered and mitigated.

It should be clear, for example, that policies such as equal pay requirements and protections for women who are pregnant or raising children, education reform, and increased access to health care and social support are necessary.

Here, as always, it will be important to listen to the voices of Black women define their most critical concerns and to urge our leaders to prioritize these concerns. For this, police and criminal justice reform and corrections to voter suppression are imperative. Authentic pro-life advocacy will work toward these goals.

Political advocacy that neglects the particular interests of Black women or attends only superficially to their needs is incompatible with a pro-life ethic.

This might raise some challenges for us at the ballot box. Linking these issues certainly does not allow for the ease of single-issue voting—or rather, we must acknowledge that the “single issue” of pro-life encompasses a wide range of policy positions. Our political engagement will need to become more nuanced, and we will have to engage in a more reflective discernment process.

Those who do continue to vote primarily on the issue of abortion must begin to expressly denounce candidates and elected officials who disparage or ignore the need for policy that promotes racial and gender equity, and our praise for anti-abortion legislation cannot drown out our demands for such policy.

Our faith calls us to stand in solidarity with our neighbors and all of creation—to demonstrate, in the words of St. Pope John Paul II, “a firm and persevering determination to commit oneself to the common good,” which Pope Francis tells us necessitates promoting “a preferential option for the poorest of our brothers and sisters” in social policy.

Importantly, solidarity is not an exclusive virtue—we cannot overlook harms to one vulnerable person or group for the sake of protecting another. Rather, our commitment must be “to the good of all and of each individual, because we are all really responsible for all.”