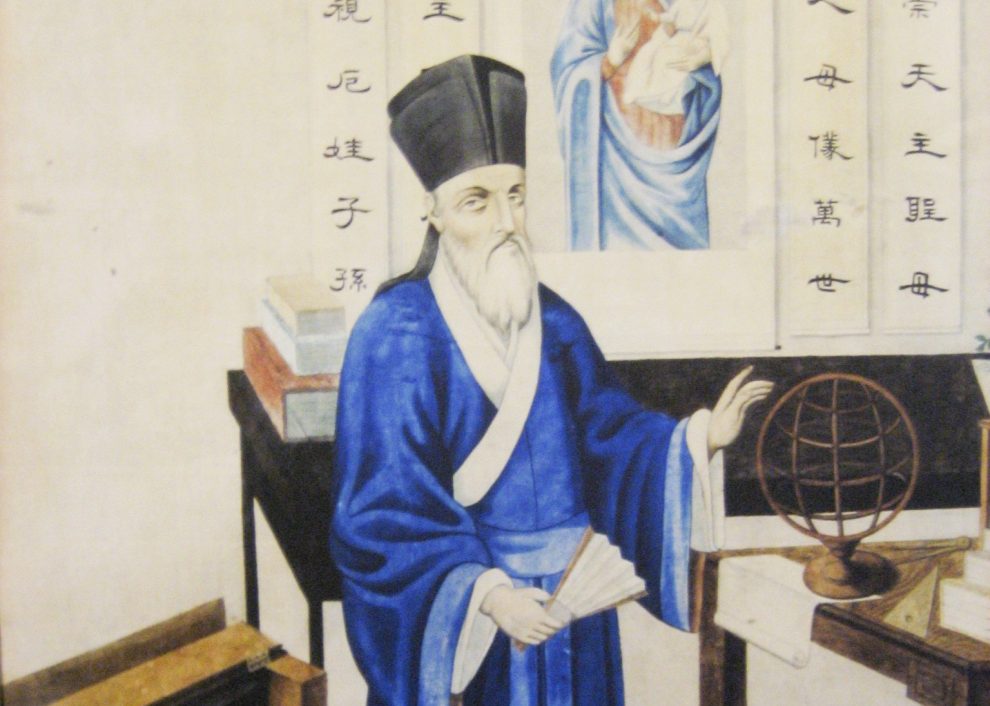 When I arrived in Taiwan 20 years ago to start a Claretian mission, I didn’t know much about Matteo Ricci. Sure, I had heard of this Jesuit missionary in some long-forgotten high school history class, but it was only after my arrival to Taiwan that I discovered this fellow European was a kindred spirit.

Matteo Ricci was born on October 6, 1552 in Macerata, Italy. At age 16 he went to Rome to study law, and three years later he joined the Jesuits at the Roman College. There Ricci had three Jesuit mentors: his novice master, Alessandro Valignano, who in 1573 would become responsible for the Jesuit missions in the Far East; Christopher Clavius, a mathematician and leading European astronomer; and Robert Bellarmine, who would later become one of the most prominent cardinals of the Counter-Reformation.

Ricci departed for the Far East in 1578, first to Goa, a Portuguese colony in India, where he finished his studies for the priesthood and was ordained in 1581. The following year, at Valignano’s request, he sailed on to Macao to assist in the Jesuits’ planned mission into mainland China.

From Macao, he and his fellow missionary Michele Ruggieri moved into Canton and finally settled in the southern Chinese city of Zhaoqing, where for six years they deepened their studies of the Chinese language and culture.

Expelled from there by a new viceroy, Ricci moved his mission to Shaozhou, where he taught mathematics to Chinese scholars, and then to Nanjing, as foreigners were banned from Beijing at the time. Finally, in 1600, he and three Jesuit companions started their travel to Beijing, where Ricci would live from 1601 until his death on May 11, 1610.

The permission to reside in Beijing gave Ricci and his companions the stability they needed for their mission work. Ricci used a two-pronged approach. First, he devoted himself to the transmission of Western science and technology to win the friendship of curious Chinese scholars.

In coming to China, I too have realized that my vision of the human being, the universe, and God is based in a Western paradigm.

Ricci’s accurate prediction of eclipses and other astronomical events necessary for the preparation of the imperial calendar gave him access to the inner court of Emperor Wanli. He also helped translate Euclid’s Elements of Geometry into Chinese and took care of the different gifts—such as mechanical clocks and a clavichord—he had given to the emperor. Finally, with the help of two Chinese collaborators, he produced several versions of his Chinese “Map of the Myriad Countries of the World.”

Ricci’s second approach was the writing of a comprehensive presentation of Catholic doctrine in a language and categories that related well to Chinese traditional culture and Confucian classics.

His one goal was to win the Chinese people—starting with its scholars and ruling class—for the kingdom of God. In recognition of his contributions and in an extraordinary exception to the prevailing law, Emperor Wanli allowed Ricci to be buried in the capital on imperial grounds.

Matteo Ricci’s spirituality and personality were deeply influenced by the humanist current sweeping Europe at the time. The Renaissance opened the eyes of medieval Europe to a new conception of the human being, the universe, and God, all of which led many to think outside the medieval theological box.

In coming to China, I too have realized that my vision of the human being, the universe, and God is based in a Western paradigm, and that I need to shed that to immerse myself more deeply in the East. I have discovered that contradiction is a necessary fact of life; that God is father and mother, male and female principle, action and inaction, almighty and powerless; and that prayer is not talking with God in many words but opening my inner self in silence to God’s presence and absence.

In the 17th century, in reaction to the Protestant Reformation, the Catholic Church abandoned many of its new endeavors—among them not only the translation of the Bible into modern languages and the dialogue with science, but also the inculturation and adaptation of the Christian message in non-European cultures.

A few decades after Ricci, a dispute over missionary methods between the Jesuits on one side and the Dominicans and Franciscans on the other developed into the so-called Chinese Rites Controversy. Rome’s ban of traditional Chinese rituals effectively ended the chances of developing a more acculturated form of Catholicism. It was not until 1939 that Pope Pius XII finally revoked the former prohibitions.

Matteo Ricci is a good example of a Jesuit spirituality that tries to find and serve God “in all things and above all things.” To Ricci, Jesus was not just the majestic judging Christ so common in the late Middle Ages, but also and foremost the Father’s “missionary.”

Jesus walked in the streets of Galilee and Jerusalem teaching the gospel, and he did so within the cultural framework of those who were listening, because he was one of them, one of us.

This idea of God befriending humanity was evident in Ricci’s life. It is his friendship with many Chinese—both poor and simple and rich and sophisticated—that has given him a special place in China’s history, including in today’s People’s Republic of China.

Since my arrival in China, most of my friends have been local Chinese, many of them non-Catholic. Ricci lived the fact that Jesus’ gospel is a living invitation that has to take root in each culture and therefore needs to get into close dialogue with cultures.

If we want people to understand the treasure of the Good News, we have to explain it through words and categories they are familiar with and can understand. Before we can do this, we first need to learn from them.

Sadly, in today’s China we are still only in the beginning stages of developing a truly Chinese theology, but things are changing. In our liturgies, many small adaptations have been introduced to better reflect Asian customs. And in theology, for example, a teaching as fundamental as our faith in the Trinity is now being expressed through the concept of yin and yang, more familiar to the Chinese.

Matteo Ricci got me to read and admire the Chinese classics—Confucius, Mencius, Laozi, and many others. Like Ricci, I have also found in them many teachings that are closely related to the gospel. In the Analects, when Confucius is asked for a universal principle that can apply to any situation, he answers: “Don’t do to others what you don’t want to be done to you.” Sounds familiar, doesn’t it?

If we want people to understand the treasure of the Good News, we have to explain it through words and categories they are familiar with and can understand. Before we can do this, we first need to learn from them.

This is what Ricci tried to do, and his worldwide recognition today—both within and outside the Catholic world—is proof of his success. His missionary and intellectual work opened a door for Christianity in China that is again open today.

Father Francisco Carin, C.M.F. is the Spanish-born major superior of the East Asia delegation of the Claretian Missionaries.