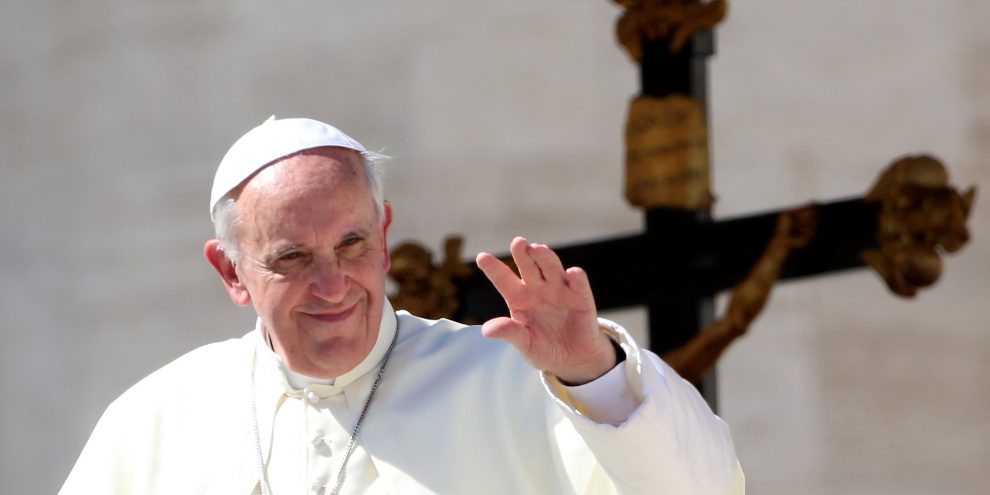 Perhaps I was influenced by the crisp fall weather, but my initial reading of Pope Francis’ Fratelli Tutti (On Fraternity and Social Friendship) was like tasting apple pie: It was familiar, though exciting, and sugary and tart by turns.

Readers hoping for a groundbreaking theological treatise will be disappointed—Francis has not given us that. He has, however, authoritatively elevated the import of the key themes of his papacy—encounter, openness, interconnectedness, and dialogue, to name a few—by bringing them together to enrich our understanding of the ways these gospel values ought to inform our engagement in building a just society. Fratelli Tutti offers a wide-ranging critique of our social structures and suggests a vision for reordering society according to charity in truth.

Since Pope Leo XIII wrote Rerum Novarum (On Capital and Labor) in 1891, there have been approximately 25 other magisterial documents that form the corpus of Catholic social thought. These documents were written to respond to particular social questions of their time with principles applicable to every age. Fratelli Tutti is the most recent contribution to this trove of teaching.

One source of the richness of Catholic social teaching is the diverse authors who contribute to the corpus, led by the Spirit to contribute their personal wisdom and unique giftings to the development of the magisterium.

Recent popes such as John Paul II and Benedict XVI have been theologians first and foremost and have deepened our faith by evaluating human experience through the lens of the eternal. Francis, however, takes a more pastoral tone, inviting us to consider the ways in which our human experience draws us into communion with God—or not.

The Covid-19 pandemic provides the backdrop for Fratelli Tutti as a sign of the times that has highlighted and exacerbated systemic injustices, revealing the fundamental interconnectedness of human beings, along with our willful fragmentation and dissonance.

“Anyone who thinks that the only lesson to be learned was the need to improve what we were already doing, or to refine existing systems and regulations, is denying reality.”

Thus, Francis writes, “Anyone who thinks that the only lesson to be learned was the need to improve what we were already doing, or to refine existing systems and regulations, is denying reality. It is my desire that, in this our time, by acknowledging the dignity of each human person, we can contribute to the rebirth of a universal aspiration to fraternity.”

This vision of rebirth is one of openness and encounter. In keeping with his previous encyclical, Laudato Si’ (On Care for Our Common Home), Francis builds on Trinitarian anthropology to explore what it means to be a human person building a just society in the context of an interconnected world. As Francis writes, “If we go to the ultimate source of that love which is the very life of the triune God, we encounter in the community of the three divine Persons the origin and perfect model of all life in society.”

This, I think, is Francis’ most vital contribution to the corpus of Catholic social thought: emphasizing that the God in whose image human beings are made is a Trinitarian God—a God who is inherently relational and who exists as pure love.

Importantly, this love is open and expansive. It does not curve in on itself but goes forth in creative energy. Human dignity cannot be separated from this creative relationality.

Here, too, we find the groundwork for solidarity and subsidiarity—the need to relate to others with the conviction that their full participation in society is essential for one’s own flourishing. Francis is not the first to offer this insight, but his pastoral exegesis is compelling and timely.

“If we go to the ultimate source of that love which is the very life of the triune God, we encounter in the community of the three divine Persons the origin and perfect model of all life in society.”

Because the encyclical is meant to respond to our particular time, Francis offers pointed critiques of contemporary policies and attitudes that run counter to the vision he lays out. Nationalism, consumerism, and individualism are primary targets.

Nationalism, for example, must “prompt an immediate response” from the faithful whenever it “rears [its] head.” This is because a Trinitarian anthropology affirms and human experience confirms that human beings are interconnected—we cannot close ourselves off to others without loss to ourselves.

At the same time, Francis recognizes the importance of fostering strong bonds at every level of relationship, from spouse to family to neighborhood and on. We cannot attend only to the universal.

Further, the strength of communities is bound to the flourishing of each individual member: “Each of us is fully a person when we are part of a people; at the same time, there are no peoples without respect for the individuality of each person. ‘People’ and ‘person’ are correlative terms.” But, he notes, particular loves always should move us to expand our horizons.

This is a transformative way of seeing the world. But, as Francis writes, it is a symptom of an unhealthy society to seek so-called prosperity while turning its back on suffering. Through a beautiful rendering of the parable of the Good Samaritan, Francis makes the case. He mentions specifically migration, human trafficking, racism, and climate-related events such as access to water as global issues that need to be approached with this relational lens. The death penalty, too, he explicitly condemns, with no ambiguity.

Fratelli Tutti should convict each of us: The same love that should form our hearts should also inform our politics, and it is clear that we have neglected gospel values in forming social systems.

Adopting this paradigm will require, as Francis wrote in Laudato Si’, an act of conversion. This is why he calls on those involved in catechesis to ensure that the faithful have are instructed in ways that attend to these concerns, noting that relativism, too, “ultimately leaves the interpretation of moral values to those in power, to be defined as they see fit.”

Fratelli Tutti should convict each of us: The same love that should form our hearts should also inform our politics, and it is clear that we have neglected gospel values in forming social systems. Conversion is never an easy experience but by approaching political life with this Trinitarian vision, we promote integral human development.

This might seem idealistic to some; politically tenuous to others. Francis defends himself against these accusations, writing:

“Recognizing that all people are our brothers and sisters, and seeking forms of social friendship that include everyone, is not merely utopian. It demands a decisive commitment to devising effective means to this end. Any effort along these lines becomes a noble exercise of charity. For whereas individuals can help others in need, when they join together in initiating social processes of fraternity and justice for all, they enter the ‘field of charity at its most vast, namely political charity.’”

If this is idealistic, it is only so because we have ignored the relevance of the gospel to the political sphere for too long.

Fratelli Tutti invites the faithful to reject individualism in favor of community; rigidity in favor of openness; debate in favor of dialogue; and prejudice in favor of encounter—and to develop political structures that affirm these personal experiences.

As the trees shed their leaves, so we are called to release our preconceived worldviews and embrace this new and vibrant vision for the future—together.